Uighur woman shares ′horrendous′ China crackdown details with US Congress | Asia | An in-depth look at news from across the continent | DW | 29.11.2018

China's treatment of its religious minorities, particularly the Uighurs in far-western Xinjiang province, was thrust into the limelight after a Uighur woman detailed the abuse she said she suffered in an internment camp. 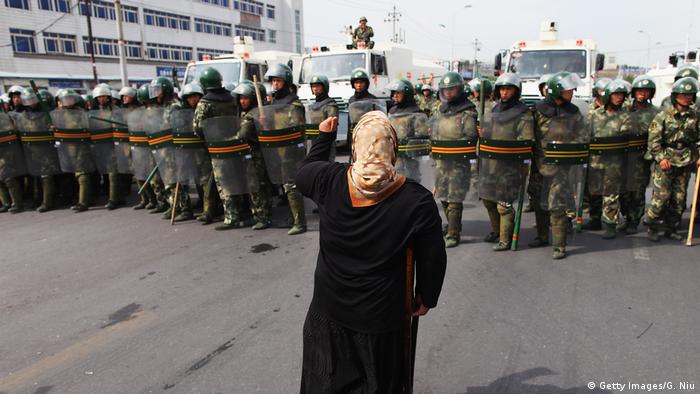 A hearing organized by the US Congressional-Executive Commission on China (CECC) on Wednesday examined the state of religious freedom in China and the growing restrictions imposed by authorities on religious bodies and practices.

The hearing, headed by Senator Marco Rubio and Representative Chris Smith, was focused mainly on the increasingly disturbing reports of persecution against the Uighur ethnic minority in Xinjiang province, as well as suppressive campaigns targeting other religious groups.

Mihrigul Tursun, a Uighur survivor of the internment camps in Xinjiang, and two experts on China's religious affairs testified at the hearing.

Tursun shared some gruesome details of her detention, saying that she was interrogated for four days in a row without sleep, had her hair shaved and was subjected to an intrusive medical examination following her second arrest in China in 2017. After she was arrested a third time, the treatment grew worse.

Raised in China, Tursun moved to Egypt to study English at a university and soon met her husband and had triplets with him. In 2015, Tursun traveled to China to spend time with her family and was immediately detained and separated from her infant children.

Three months later after her release, one of her triplets died and the other two developed health problems. Tursun said the children had been operated on. She was arrested for a second time about two years later.

Several months later, she was detained a third time and spent three months in a cramped, suffocating prison cell with 60 other women, having to sleep in turns, use the toilet in front of security cameras and sing songs praising China's Communist Party. Tursun said she and other inmates were forced to take unknown medication, including pills that made them faint and a white liquid that caused bleeding in some women and loss of menstruation in others. She said nine women from her cell died during her three months there.

"The authorities put a helmet-like thing on my head, and each time I was electrocuted, my whole body would shake violently and I would feel the pain in my veins," Tursun said in a statement read by a translator.  "I don't remember the rest. White foam came out of my mouth, and I began to lose consciousness," Tursun said. "The last word I heard them saying is that you being a Uighur is a crime."

She was eventually released so that she could take her children to Egypt, but she was ordered to return to China. Once in Cairo, Tursun contacted US authorities and, in September, came to the US and settled in Virginia.

Just as she thought she's free from all the traumatic experiences, she said she received a voicemail from her brother, urging her to go to the Chinese embassy in the US and confess that whatever she shared with the media was false. "He told me to take back everything I've said, and threatened that China could get me no matter where I hide," Tursun noted. She also said that even in the US, she continues to be followed and harassed by Chinese agents.

Read more: Uighur journalist Gulchehra Hoja: 'I have my own sad story to tell'

'Too horrendous to ignore'

US Senator Rubio noted that China not only persecutes religious groups, but also those who advocate and petition the Chinese government on behalf of these outfits. "China's suppression of religious faith and religious communities is real. It is evil, it is too horrendous to ignore," said Rubio.

China has faced growing international criticism in recent years over the incarceration of Uighurs, Kazakhs and other minorities, which authorities claim is necessary to combat religious extremism.  The US State Department estimates that since April 2017, the Chinese government has detained 800,000 to possibly more than 2 million Uighurs, Kazakhs and other Muslims in political re-education camps.

Human rights groups and activists blame Chinese President Xi Jinping for the deteriorating religious freedom in the country, arguing that Xi's "sinicization" campaign has led to increasing curbs and tight control over religious practice in China.

One of the witnesses of the hearing, Dr. Samantha Hoffman, pointed out that the Chinese Communist Party's (CCP) actions reflect its desire to protect and expand party power in every aspect of Chinese life. "The crackdown on religion is a visible manifestation of a much larger effort to defend the CCP's version of truth," Hoffman said during the hearing. "It aims to eliminate ideological threats that political opponents can use as vehicles to challenge the party."

Despite growing criticism of its policies, the Chinese government seems to be planning an expansion of the Xinjiang model to other parts of China, say observers.

On Tuesday, China's state-run tabloid Global Times published an article saying that Ningxia Hui Autonomous region, another region in northwestern China with a substantial number of Muslim minorities, has signed an anti-terrorism cooperation agreement with Xinjiang, hoping to "learn from [Xinjiang's] experience in promoting social stability."

The announcement triggered speculation that China is planning to export its "repressive tactics" in Xinjiang to other parts of China. Adrian Zenz, an expert on Xinjiang, believes it is evident that the Chinese government is planning to adopt the methods used in Xinjiang in other regions.

"Beijing first trials an approach in one region and then expands it if it feels that it has worked," Zenz told DW. He claimed that this move also shows China's growing confidence on the global stage. Rather than denying the existence of internment camps, the Chinese government now showcases the "re-education" drive as something that Western countries can learn from, Zenz argued.

"Beijing feels that it has become developed and successful, while the West is peaking or even declining," said Zenz. "In Chinese mentality, the stronger or superior can lecture the weaker or inferior."

Even though more governments than before are paying attention to the ongoing developments in Xinjiang, experts say it is unlikely that China will reduce the scale of internment in the province anytime soon. "[While] I have heard that some people have been released, I believe the [Chinese] government will still keep many people in the camps to continue their brainwashing practice," said Patrick Poon, researcher at Amnesty International.

Western countries, including Germany, have demanded China shut down detention camps where up to a million ethnic Muslims are reportedly being held. Beijing has rejected the demands as being "politically driven." (07.11.2018)

An official Communist Party paper has defended China's policies in Xinjiang after a UN report suggested hundreds of thousands of Muslim Uighurs are in internment camps. China rebuffed Western pressure over its policies. (13.08.2018)