An official Communist Party paper has defended China's policies in Xinjiang after a UN report suggested hundreds of thousands of Muslim Uighurs are in internment camps. China rebuffed Western pressure over its policies. 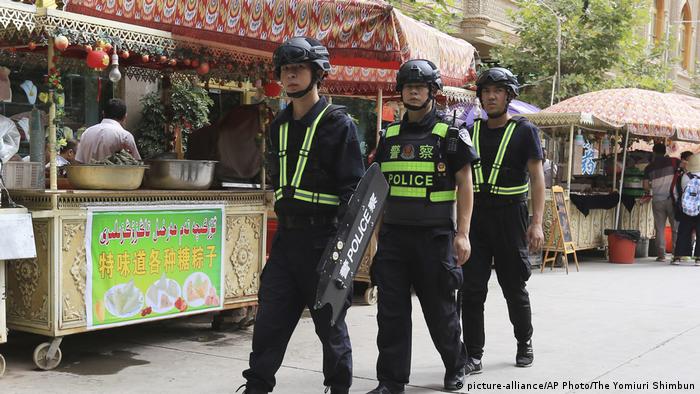 The editorial in Global Times was the first response from China to a worrying United Nations panel on Friday claiming hundreds of thousands of Uighurs have been detained in what "resembles a massive internment camp that is shrouded in secrecy."

"Through the strong leadership of the Communist Party of China, the national strength of the country and the contribution of local officials, Xinjiang has been salvaged from the verge of massive turmoil. It has avoided the fate of becoming ‘China's Syria' or ‘China's Libya,'" the editorial said.

The editorial slammed the West for putting external pressure on China and not understanding the situation, while describing keeping turmoil away from Xinjiang as "the greatest human right."

"The turnaround in Xinjiang's security situation has avoided a great tragedy and saved countless lives, thanks to powerful Chinese law and the strong ruling power of the Communist Party of China. What the West has been hyping has destroyed numerous countries and regions. When the same evil influence was spreading in Xinjiang, it was decisively curbed," the Global Times commented.

A UN human rights panel said there were credible reports that hundreds of thousands of Muslim Uighurs in the Xinjiang autonomous region were being forced into "political camps for indoctrination" to denounce Islam and swear loyalty to the Communist Party.

Without acknowledging acknowledging the existence of any camps, the Global Times editorial in English and Chinese stated that "the current peace and stability in Xinjiang is partly due to the high intensity of regulations. Police and security posts can be seen everywhere in Xinjiang."

Hu Lianhe, deputy director general of the United Front Work Department of the CPC Central Committee, told the UN Committee on the Elimination of Racial Discrimination on the second day of its regular review of China's record that the country respected freedom of religion.

"Those deceived by religious extremism ... shall be assisted by resettlement and re-education," he added.

However, he called the claim that 1 million people have been detained for reeducation as "completely untrue."

Gay McDougall, a member of the UN panel who accused China last Friday of running internment camps, said that Beijing needed to do more than just claim it doesn't violate minority rights.

"To say that they don't violate rights of minorities does not prove anything. We have to more than a denial of allegations," she told the Chinese delegation on Monday. "I notice that you didn't quite deny that these re-education or indoctrination programmes don't take place," she added,

China has said that Xinjiang faces a threat from Islamist extremists and separatists, who it says have carried out numerous attacks in the region to stoke tension between the Turkic-speaking Muslim Uighur minority and ethnic Han Chinese. Human rights groups point to discrimination and repression fueling Uighur discontent.

Hundreds of Uighur militants are believed to have joined the "Islamic State" and other jihadist groups in Iraq and Syria, creating concern they may return to fight in Xinjiang.

DW spoke to Uighur journalist Gulchehra Hoja who, along with some of her colleagues, accuses the Chinese authorities of arresting her family members as retribution for her reports about the plight of the Uighurs. (05.03.2018)

In China's Muslim-majority Xinjiang region, there have been reports of "re-education" camps where over 200,000 "suspects" are being held. DW spoke with researcher Adrian Lenz about the veracity of the reports. (21.06.2018)