Western countries, including Germany, have demanded China shut down detention camps where up to a million ethnic Muslims are reportedly being held. Beijing has rejected the demands as being "politically driven." 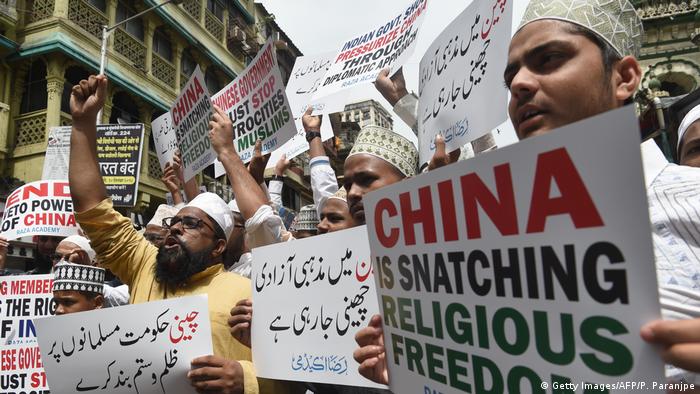 China has dismissed criticism of the suspected mass internment of Uighur Muslims in the far western region of Xinjiang.

At a United Nations review of the country's human rights record in Geneva on Tuesday, China said "training centers" to equip people with employable skills had helped quell Islamist extremism in once troubled Xinjiang.

Rights activists, however, say the centers are political indoctrination camps where ethnic Uighurs, Kazakhs and other Muslim minorities are taught Communist propaganda and forced to renounce their faith.

UN experts have  previously said there are credible reports that as many as 1 million ethnic Uighurs are being held in a secret network of camps.

Calls for immediate release of detainees

At Tuesday's UN review — a process every member state undergoes every four to five years — the United States, France, Germany and several other countries called on China to address concerns about its treatment and heavy surveillance of Muslim minorities in Xinjiang.

Mark Cassayre, the US charge d'affaires, urged Beijing to "immediately release the hundreds of thousands, possibly millions, of individuals" arbitrarily detained in the region's camps.

French Ambassador Francois Rivasseau told the forum China should "halt massive imprisonment" and "guarantee freedom of religion and belief, including in Tibet and Xinjiang," while representatives from Canada and the UK warned the human rights situation had "deteriorated."

"We will not accept the politically-driven accusations from a few countries that are fraught with biases and in total disregard of the facts," Le said.

Yasheng Sidike, the Uighur mayor of the Xinjiang capital, Urumqi, told the UN the government's policies in Xinjiang meant there had been "no incident of violent terrorism" for the past 22 months.

Peter Irwin, a program manager and researcher for the World Uighur Congress, told DW the difference between China's view and the reality described by rights groups was stark.

"China has been calling these camps vocational centers, so in China's narrative, it is consistent that no such camp [as how we describe them] existed," he said.

"China should cooperate with the UN's procedures … and allow UN monitor groups to go to the region and inspect the conditions at the camps."

China's treatment of Muslim Uighurs has prompted a UN panel to express alarm. A group of US senators wants Chinese officials sanctioned. Beijing denies turning its Xinjiang region into a "high-tech police state." (30.08.2018)