China's treatment of Muslim Uighurs has prompted a UN panel to express alarm. A group of US senators wants Chinese officials sanctioned. Beijing denies turning its Xinjiang region into a "high-tech police state." 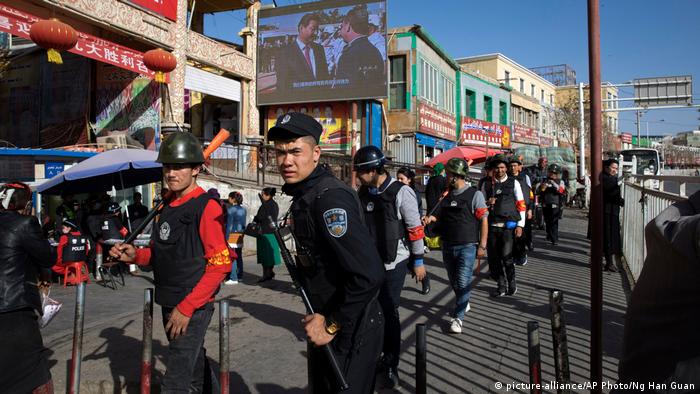 The UN's Geneva-based Committee on the Elimination of Racial Discrimination said Thursday it was alarmed by "numerous reports of ethnic Uighurs and other Muslim minorities" being detained in China's western Xinjiang region.

Its findings coincided with a call from 17 US congressional lawmakers that Washington impose sanctions on two surveillance equipment manufacturers and seven Chinese officials, including Xinjiang chief Chen Quanguo.

China rebuked America, saying it should cease "pretending" to be a human rights adjudicator "instead of poking their noses into other countries' affairs."

Xinjiang has a Han Chinese majority and a mostly Muslim Uighur minority who call the region home.

The UN panel, conducting one of its regular reviews, said, although Beijing rejected such reports as false, it regretted that "there is no official data on how many people are in long-term detention or who have been forced to spend varying periods in political 're-education camps'" in Xinjiang.

'Upwards of a million'

Estimates about them "range from tens of thousands to upwards of a million," the panel wrote, and went on to note reports of "mass surveillance," biometric data "profiling," bans on the Uighur language, and expatriate Uighurs being forced to return home "involuntarily."

Detentions without trial must be halted and "wrongfully held" individuals must be released "immediately," said the UN committee.

The panel urged China to allow independent experts to investigate deaths in custody before adding that it was also concerned about "significant restrictions" on Tibetans in the Tibet Autonomous region.

Earlier in August, a Chinese official told the UN panel that tough measures were necessary in Xinjiang but did not target any specific ethnic group in the vast region, which borders Afghanistan and Pakistan.

On Thursday, Chinese Foreign Ministry spokeswoman Hua Chunying said US lawmakers should "serve their Americans properly instead of poking their noses in other countries' affairs."

It allows the US government to place travel and financial restrictions on individuals anywhere in the world given credible proof of rights violations or corruption.

Numerous non-governmental organizations (NGOs) and China experts assert that the reality in Xinjiang is sinister, citing former detainees and official documents as pointers to a massive program of political and cultural indoctrination.

The German government has suspended deportations of Uighurs to China until further notice, according to a media report. The Muslim minority faces discrimination and persecution in the northwestern Xinjiang region. (23.08.2018)