Relatives of five reporters for Radio Free Asia's Uighur service have been detained in China's Xinjiang region. RFA said families were targeted in retaliation for its coverage of Beijing's crackdown on ethnic Uighurs. 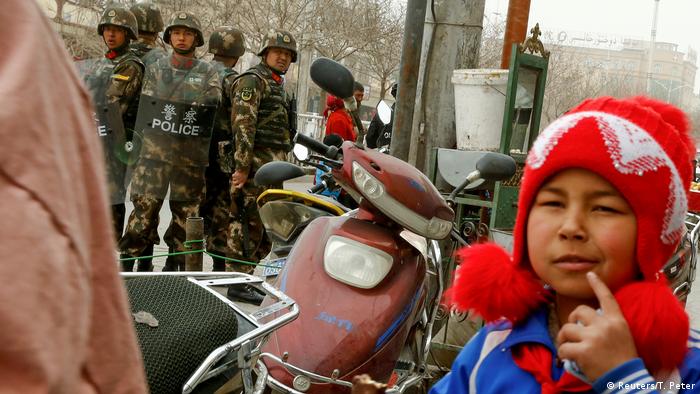 Radio Free Asia (RFA), a US government-funded broadcaster, this week accused the Chinese government of trying to silence and intimidate its Uighur service journalists, following reports that security forces had detained several of their close relatives.

According to RFA, the Chinese government's broad campaign against the families of its staff came in retaliation to the broadcaster's coverage of Beijing's crackdown against the ethnic Uighur people in the Xinjiang region.

"Harassment is nothing new for RFA's journalists, especially among our Uighur and Tibetan staff with family in China,” the broadcaster's director of public affairs, Rohit Mahajan, told the New York Times. However, the latest detentions appeared to be far more extensive than previous ones, Mahajan added.

Since last year, Beijing has said it is cracking down on separatist and religious extremists in the Xinjiang region. That campaign has seen tens of thousands of Uighurs, a predominantly Muslim and Turkic-speaking ethnic group arrested, with many confined in so-called "political re-education camps".

Reports of the targeted crackdown against RFA reporters' families prompted an array of condemnation from human rights group and press freedom watchdogs.

The Committee to Protect Journalists (CPJ) said it was "alarmed" by reports coming out of Xinjiang.

"Punishing family members of journalists beyond the reach of the Chinese government is a cruel, if not barbaric, tactic," CPJ Asia Program Coordinator Steven Butler said in a statement. "The Chinese government should immediately account for these people's health, whereabouts, and legal status and set them free."

The Chinese government has flooded Xinjiang with security forces for the past decade, claiming it is combating the threat posed by Islamist extremists in the region. However,  the Uighur minority has historically faced a raft of restrictions imposed on them by Beijing that people of Han ethnicity don't have to face. These include restricted access to acquiring a passport, being forced to register when staying at hotels, and allowing authorities to randomly check their mobile phones for suspicious content.

Why Uighurs Exiled in Germany are Worried