The Chinese governmental agencies and commercial firms were blacklisted in the US over what it says are rights violations in Xinjiang. The US has denied the move is linked to trade talks that are set to resume this week. 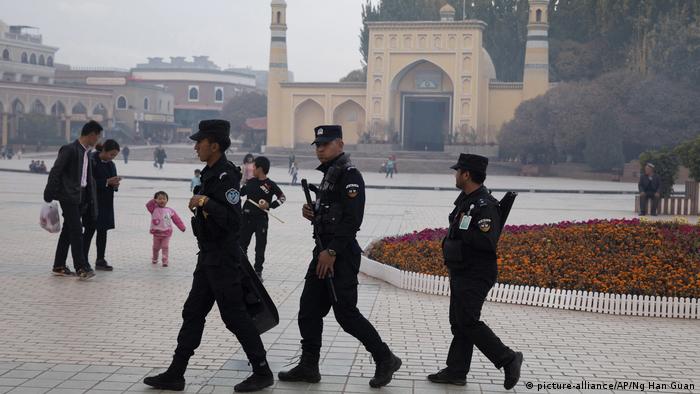 The US Department of Commerce on Monday said it was blacklisting 28 Chinese governmental and commercial organizations, citing rights violations against Uighurs and other Muslim minorities in the Xinjiang region.

Among the blacklisted agencies and companies are the Xinjiang province's Public Security Bureau, together with 19 other government agencies.

Beijing slammed the US blacklist on Tuesday, saying the claims are "groundless."

"This act seriously violates the basic norms of international relations, interferes with China's internal affairs and damages the interests of the Chinese side, and China expresses its strong dissatisfaction and resolute opposition to this," said foreign ministry spokesman Geng Shuang at a press briefing.

The agencies and businesses will be added to the Department of Commerce's "entity list," barring them from buying parts and components from US companies without prior government approval.

The move comes as high-level trade talks between US and Chinese officials are set to resume in Washington.

The Commerce Department said in a statement that these entities "have been implicated in human rights violations and abuses in China's campaign targeting Uighurs and other predominantly Muslim ethnic minorities in the Xinjiang Uighur Autonomous Region (XUAR)."

It added that the entities on the list are specifically implicated in "China's campaign of repression, mass arbitrary detention, and high-technology surveillance against Uighurs, Kazakhs, and other members of Muslim minority groups."

Chinese state media on Tuesday said video surveillance firm Hikvision resolutely opposes the US decision to blacklist the firm, saying the decision has no basis in fact.

The US government denied that the decision to blacklist the 28 companies is linked to trade talks with Beijing that are due to resume this week in the hope of resolving a long-running trade war.

In May 2019, the US government added Huawei to the entity list over national security concerns, and in August, the Trump administration released an interim rule banning federal purchases of telecommunications equipment from five Chinese companies, including Huawei and Hikvision.

Huawei has repeatedly denied it is controlled by the Chinese government, the military or intelligence services and has filed a lawsuit against the US government's restrictions.