How Uighurs are using a popular video app to mourn missing relatives | Asia | An in-depth look at news from across the continent | DW | 23.08.2019

Dozens of short videos featuring Uighurs crying silently have surfaced on a popular Chinese video app. Activists say the videos may contain hidden messages and are a form of protest against China's "re-education" camps. 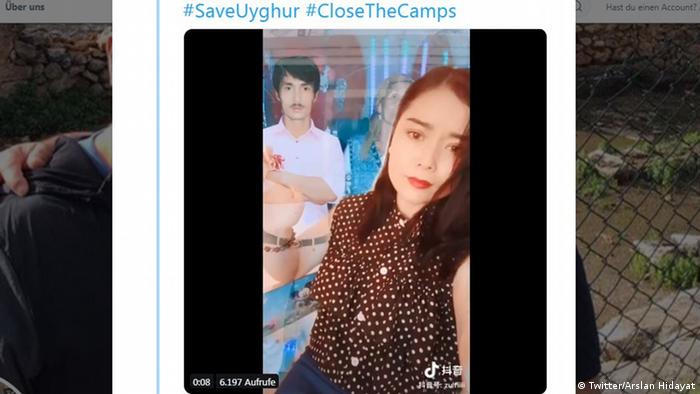 Over the past week, a Chinese video sharing app witnessed a surge of melancholy videos uploaded by Uighur users in Xinjiang.

The app, Douyin, is China's domestic equivalent of TikTok, a mobile app popular among young people around the world. Users can produce and upload all kinds of short video clips and are usually comical in nature.

However, these videos uploaded by Uighur users, a Chinese Muslim ethnic minority, use the same song and feature Uighurs crying silently with background photos of what has been presumed to be missing family members.

According to Arslan Hidayat, an Australian Uighur activist who has been closely tracking the development of  Xinjiang's "re-education" camps, many of these videos have been shared on other social media platforms such as Facebook. 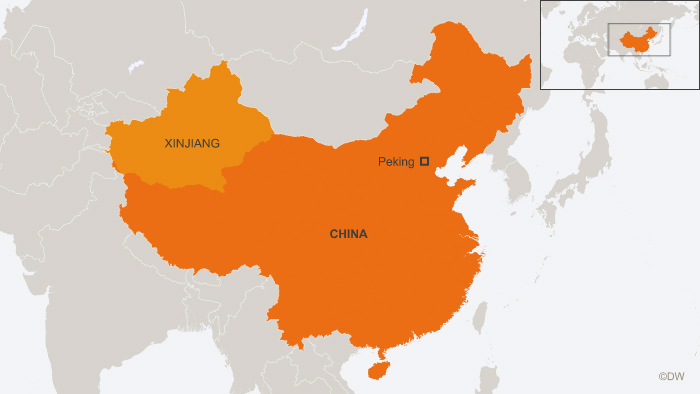 Xinjiang is an autonomous territory in northwest China, home to the majority Muslim Uyghur minority.

While Chinese state officials call them "re-education" camps intended to prevent terrorism and extremism, there is mounting evidence that the centers in the Muslim-majority region are actually prison-like compounds designed for mass incarceration. Over 200,000 "suspects" are reportedly being held in the autonomous territory in northwest China.

Hidayat compiled dozens of the Uighur videos and shared them on Twitter.

"In one of the videos, a Uighur girl raised four fingers while she cried silently over an image of four men in the background," Hidayat told DW. "When she put her hand down, I knew there was clearly a message that she wanted to share with the world."

Hidayat believes that Uighur people may be trying to convey hidden messages through the use of family photos and silent cries, as well as using the Chinese hashtag, "traveling through time to meet you."

He also said that most of the videos use the song, "return," from a popular Turkish TV series.

"It's clear that they are hiding the real messages of the videos under the hashtag, so if they are confronted by authorities in China, they could always claim that the videos are dedicated to whoever they want to meet if they could travel back in time," Hidayat explains.

The Wall Street Journal reported that many of the accounts that shared these videos have been deleted or disabled while the videos with pictures of missing family members have also been removed from some accounts that are still active. Under Chinese law, Douyin must delete any content expressing political dissent.

A message to the Chinese government?

In July,Xinjiang's governor, Shohrat Zakir, claimed that the majority of Uighurs detained in the "re-education" camps have been released. As the claim cannot be independently verified, Hidayat argues that the videos could be the Uighurs' way of disapproving Zakir's claim.

"If most of the Uighurs detained in camps have been let out, many of them should have been able to reach their family members in Xinjiang," Hidayat said. "That's why these videos and the hashtag "#provethe90" is so important, because we want the Chinese government to prove it."

However, other experts think it is difficult to assess the real meaning behind the videos, as there is no context or information about the families.

"We don't know how the movement started and why," said Vanessa Frangville, the chairperson of Chinese Studies at the Université Libre de Bruxelles. "Considering we don't have the background stories of these families, I'd be careful not to over-interpret," she told DW.

However, Frangville said that if indeed the videos are intended to testify for missing family members, it is a creative form of resistance that reflects the resilience of Uighurs in Xinjiang.

"For most of them, the past two years have seen a sea of emotions ebbing and flowing, but this crisis also led some to heroically use every resource, including social media, to share their experience and pain with the world," Frangville said. "These videos are proof that many Uighurs are still unaware of their relatives' whereabouts or still mourning relatives."

Nevertheless, she added that the real intention of the videos is hard to determine. 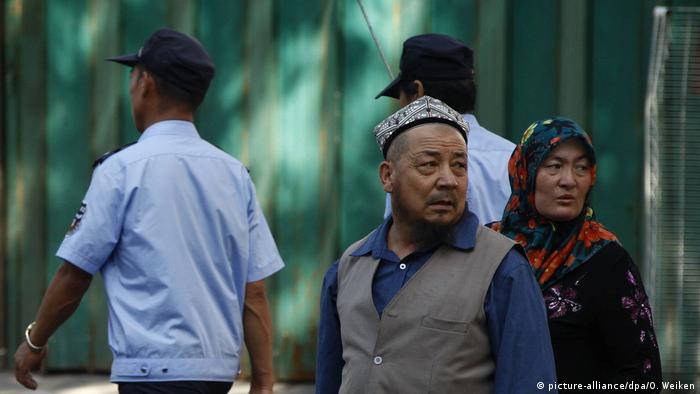 In response to the videos, Hidayat decided to initiate a social media campaign to show solidarity, even though Uighurs abroad cannot contact those who upload the videos.

"Since most of the videos don't clearly indicate what they are crying about, I started using the hashtag #WeHearU to respond to them," Hidayat explained to DW. "I want them to know that even if you are not openly saying anything through these videos, your messages are coming out loud and clear."

Hidayat describes the Uighurs' videos as being like a "message in a bottle," and that for Uighurs abroad such as himself, creating a social media campaign is a way to respond to them and have their voices heard.

"I'm writing back to them and say 'we hear you and we are trying to get your messages out,'" Hidayat said.

While these videos help draw the world's attention to the allegations of mass Uighur imprisonment in Xinjiang, Frangville thinks the videos should not overshadow other important issues.

She points out that the international community should find ways to effectively identify problems such as the western companies that  depend on forced-labor camps in Xinjiang as well as China's increasing role ininternational normative institutions. "This is where the pressure on China can come from and these are the main questions we should focus on," Frangville underlined.