Indian Prime Minister Narendra Modi has made a brief visit to Sri Lanka to emphasize his "neighborhood-first policy." China is also trying to exert its influence in both Sri Lanka and the Maldives. Indian Prime Minister Narendra Modi was received Sunday by his Sri Lankan counterpart, Ranil Wickremesinghe, as he arrived in Colombo after completing his Maldives trip.

Modi's Maldives and Sri Lanka visits are his first since he was re-elected as prime minister in May.

The Indian prime minister was scheduled to hold talks with President Maithripala Sirisena and opposition leaders as well.

Modi's choice of the Maldives and Sri Lanka for his first overseas trip after re-election "underlines the continued emphasis that the government lays on the 'neighborhood-first' policy," according t Indian Foreign Secretary Vijay Gokhale.

India's "neighborhood-first" policy, however, excludes Beijing and Islamabad, with whom New Delhi has territorial and geopolitical disputes. 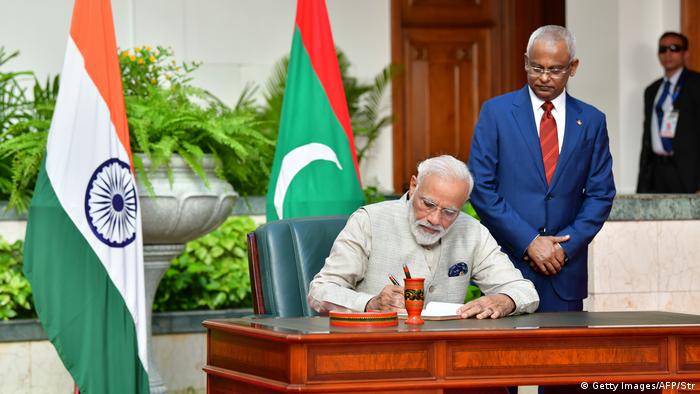 India has become wary of China's increasing involvement in both Sri Lanka and the Maldives. Both South Asian countries are facing political instability as their ruling class has been divided into pro-India and pro-China groups.

In recent years, China has managed to increase its footprint in Sri Lanka. It began to develop a close partnership with the country when Mahinda Rajapaksa was president from 2005 to 2015. In 2013, China unveiled plans for the $1.4 billion (€1.2 billion) Colombo Port City.

China and India have strategic interests in the Indian Ocean, and Sri Lanka, a key location for global shipping lines, is crucial for implementing them. Its biggest city, Colombo, is set to become part of China's New Silk Road project to transport goods to the West.

China also considers the Maldives an important route in its Belt and Road Initiative (BRI) that, apart from its other projects, also aims to connect the Indian Ocean to Central Asia. Beijing's ties with Male strengthened under Former President Abdulla Yameen's rule.

But India has been able to assert itself in both Sri Lanka and the Maldives in the past few months. Wickremesinghe, India's close ally in Colombo, is back in power after attempts by the president to oust him, whereas a pro-India alliance of political parties won the general election in the Maldives in April.

A joint statement by India and the Maldives said that both countries are fully committed to deepening their "multifaceted and mutually beneficial partnership."

Modi also vowed to assist the Maldives in its fight against climate change and terrorism.

The Indian premier was set to discuss the issue of terrorism with the authorities in Sri Lanka, where several terrorist attacks on churches and hotels killed over 240 people in April.

India and China are closely watching the political unrest engulfing Sri Lanka, a country they both regard as a critical player in their geo-strategic game for dominance in South Asia. (31.10.2018)

The unfolding political emergency in the Maldives has prompted calls for India to intervene and resolve the deteriorating situation. The crisis poses both a diplomatic and ideological challenge for New Delhi. (06.02.2018)