The unfolding political emergency in the Maldives has prompted calls for India to intervene and resolve the deteriorating situation. The crisis poses both a diplomatic and ideological challenge for New Delhi. 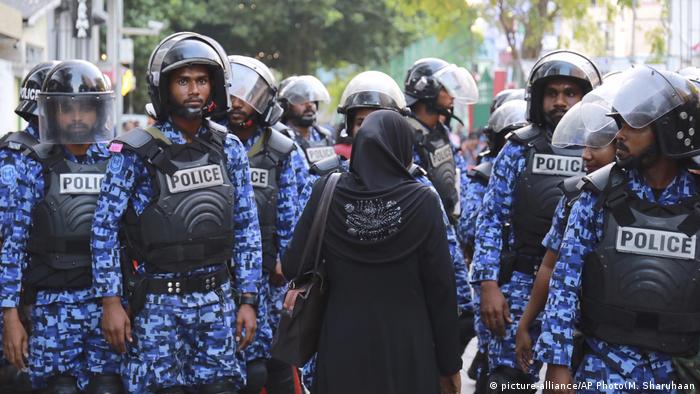 The fast-paced flow of events in the Maldives over the past several days has caught India in a bind. The Indian government said Tuesday it was "disturbed" by the Maldives government's declaration of a state of emergency and concerned by the arrests of top judges and opposition leaders.

"We are disturbed by the declaration of a state of emergency in the Maldives following the refusal of the government to abide by the unanimous ruling of the full bench of the Supreme Court on 1 February, and also by the suspension of constitutional rights of the people of Maldives," India's foreign ministry said in a statement.

"The arrest of the Supreme Court chief justice and political figures are also reasons for concern. The government continues to carefully monitor the situation," it added.

The latest political turmoil in the tiny Indian Ocean island nation started last week, when the Supreme Court ordered the release of all political dissidents and quashed the convictions of former President Mohamed Nasheed and other exiled opposition figures.

The judges also ordered the government to restore the seats of 12 legislators sacked for defecting from President Abdulla Yameen's party. This move would effectively give the opposition a majority in parliament and the power to impeach the president. 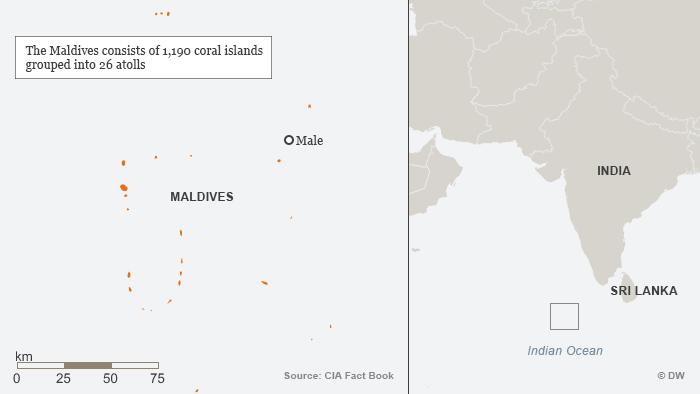 Yameen responded to the court's rulings by shuttering parliament before moving late Monday to impose a state of emergency. It gives sweeping powers to security forces to arrest and detain individuals as well as curtails the powers of the judiciary and bars parliament from impeaching Yameen.

Authorities on Tuesday stormed the Supreme Court at dawn and arrested Chief Justice Abdulla Saeed and another judge, dramatically raising the stakes.

In a televised address to the nation, the president accused the judges of being part of a plot to overthrow him. "I had to declare a national emergency because there was no other way to investigate these judges," he said. "We had to find out how thick the plot or coup was."

Opposition leader Nasheed, meanwhile, accused Yameen of acting illegally and called on India and the US to step in and help remove him from office. "President Yameen has illegally declared martial law and overrun the state. We must remove him from power," said Nasheed, the first democratically elected leader of the Maldives, in a statement issued Tuesday.

"We would like the Indian government to send an envoy, backed by its military, to free the judges and the political detainees, including former President Maumoon Abdul Gayoom, from their detention and to bring them to their homes. We are asking for a physical presence."

The Maldives, which is made up of around 1,200 islands and is better known for its picturesque beaches and holiday resorts, has been mired in political instability for years, which has hindered its development and growth prospects.

The country's transition to democracy following 30 years of autocratic rule - under President Maumoon Abdul Gayoom - has been a rough ride.

While in 2008 Nasheed won the first multi-party election, he was forced to resign in February 2012 following a mutiny by police. He was then jailed in 2015 after being convicted on a terrorism charge widely seen as politically motivated. Nasheed has been in exile since 2016 when he travelled to the UK for medical treatment and was granted asylum there.

As the main regional power in South Asia, New Delhi has enjoyed traditionally close ties with the Maldives for decades. But relations between the two sides have been strained in recent years as Male has intensified its economic and political engagement with China.

"We have to calibrate our interests. We have to promote regional stability and the consequences of intervention can never be measured.  It could lead to a misadventure. We are monitoring the situation," a senior government official in New Delhi told DW on condition of anonymity.

Observers say a major concern for India is that if it intervenes forcefully in the Maldives, it could push the Yameen administration further into the arms of the Chinese, who have been investing heavily in the country.

India has intervened in the Maldives' internal affairs in the past, with the Indian government coming to former President Maumoon Abdul Gayoom's rescue in 1988 by sending troops to foil an attempted coup in the country. India has also maintained a naval presence in the Maldives since 2009.

Indian analysts say New Delhi's foremost priority is to ensure that democracy returns to the Maldives. And to that end, they say, India should use backdoor diplomacy.

"This is a huge challenge, given the security concerns in the region. The Maldives has forged links with China and any intervention could lead to a big fiasco. We have to be careful and ensure stability in the region," Retired Indian Major General Ashok Mehta, a security analyst, told DW.

"The situation is complex. The best way forward is for India to establish a forum with the UK and the US and put pressure on Yameen to follow the Supreme Court ruling in letter and spirit and move towards elections," Mahendra Lama, an expert in south Asian studies, told DW.

Others like C Raja Mohan, a leading foreign policy expert and director of Carnegie India, argue that even though New Delhi has often intervened in the internal affairs of its neighbors like Bangladesh, Sri Lanka and Nepal, "the problem for India has always been making sensible judgements on when it is worth intervening rather than whether."

"Delhi surely knows one thing from its past interventions. The task of fixing other people's problems is never easy. And not all consequences of intervention can really be predicted or managed," wrote Raja Mohan in The Indian Express newspaper.

Yameen Rasheed is the third media figure on the tropical atoll to either be killed or abducted in the past five years. The problem has worsened under President Abdulla Yameen who won a dubious election in 2013. (23.04.2017)