The Maldives government claims the Supreme Court is trying to oust President Yameen Abdul Gayoom, who has refused to obey the top court's order to release political prisoners, including former President Mohamed Nasheed. 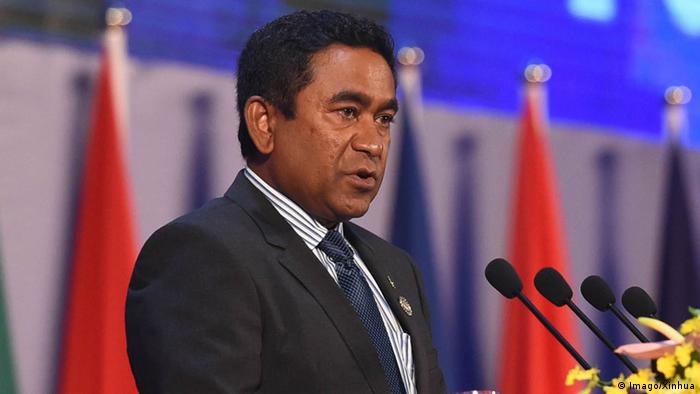 The Maldives government has ordered law enforcement agencies to disregard any move by the country's Supreme Court to arrest or impeach President Yameen Abdul Gayoom for not obeying its ruling to release jailed opposition leaders.

The tiny Indian Ocean archipelago, best known for its picturesque beaches, is witnessing a fresh political crisis after the Supreme Court on Thursday threw out terrorism convictions against former President Mohamed Nasheed and other opposition leaders, saying that prosecutors and judges had been influenced "to conduct politically motivated investigations."

But the Yameen government has so far refused to comply with the court's order despite calls from the United States and India, among other nations, to heed the court's decision.

The order could allow Nasheed, who was granted asylum in Britain after leaving the Maldives to receive medical treatment, to challenge President Yameen when he seeks re-election later this year. The exiled leader said on Friday, he will be contesting the presidential elections expected later this year.

Maldives Attorney General Mohamed Anil claimed on Sunday that the government had received information the Supreme Court was preparing to fire Yameen.

"We have received information that things might happen that will lead to a national security crisis," Anil told reporters in the capital, Male.

"The information says the Supreme Court might issue a ruling to impeach or remove the president from power," he said, adding that government bodies had been given instructions not to carry out such an "unconstitutional order."

The government has ordered riot police to stand guard outside government offices in Male and the Republic Square, a site of protests by opposition activists.

The opposition said in a statement that it feared President Yameen might order a military takeover of the country to prevent his ouster.

"The intimidation of the Supreme Court justices, with the highly irregular statement made by the attorney general defying the Supreme Court, supported by the two chiefs of the security forces, is tantamount to the effective sidelining of the judiciary and in direct contravention of the constitution," the statement read.

Earlier on Saturday, the government indefinitely postponed the opening of the parliament.

The opposition alleges the move was prompted by the government's fear of losing their majority. This came after the Supreme Court in its Thursday ruling also reinstated 12 lawmakers who had been ousted for switching allegiance to the opposition.

Yameen also fired a national police chief for the second time since the court order. The president's office said he dismissed Ahmed Saudhee and appointed Deputy Police Commissioner Abdulla Nawaz to act as interim police chief. No reason was given for the dismissal.

Yameen also said he was open to holding an election several months before his term ends in November.

But Nasheed was not impressed and termed the move as "ludicrous."

Leaders of the archipelago in the Indian Ocean have said they want to leave the group of former British colonies. Earlier, the Commonwealth had threatened Maldives with suspension for its dubious human rights record. (13.10.2016)

The country abandoned the death penalty in favor of life in prison in 1954, but now 17 people are on death row. And a new defamation law is seen as a full frontal attack on free speech and a free press. (09.08.2016)