Polls have closed following a parliamentary vote in the Maldives, with some 78 percent of voters casting their ballots. Political turmoil has plagued the archipelago for years, with China and India vying for influence. 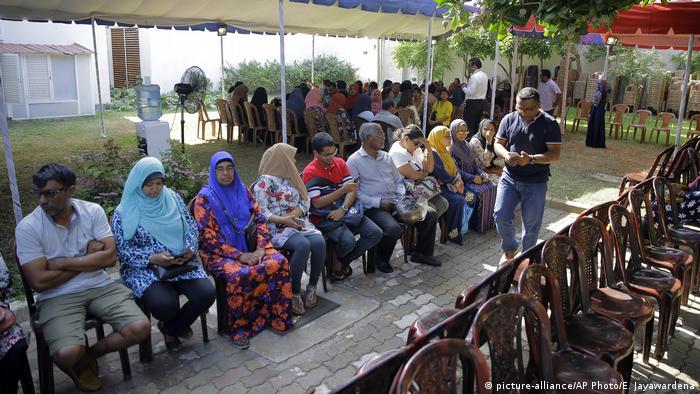 The parliamentary election in the Maldives has concluded "without major incidents," an electoral commission official said on Saturday. Some 78 percent of Maldivian voters took part in the polls despite unusual heat.

Over 264,000 people were eligible to cast a ballot on the Indian Ocean archipelago, where 386 candidates are running for a place in parliament.

President Ibrahim Mohamed Solih (pictured above) needs at least 44 seats in the 87-member parliament to secure a majority. His coalition currently has 52 seats, but one major political partner with 22 seats recently aligned with former president Yameen Abdul Gayoom.

Solih's Maldivian Democratic Party (MDP) and Yameen's Progressive Party of Maldives (PPM) are the main contenders in the election.

Provisional results are expected by Sunday, but official results are due only on Friday after all ballots cast outside the country have been received.

Solih, who defeated Yameen in last year's presidential election, requires a majority in parliament to be able to pass legislation and implement his political and economic agenda. The president has promised reforms, an end to political influence over the judiciary, police and the bureaucracy, and a curb on financial corruption.

On Friday, he urged voters to back his party to ensure a stable government that was capable of implementing the necessary changes.

In last year's presidential election, the opposition parties had joined hands to defeat Yameen, but soon after Solih's victory, the coalition split and left the new president without a parliamentary majority.

Yameen, who was released last week from detention after being arrested in February on corruption allegations, spoke to voters through a phone call broadcast over loudspeakers.

Saturday's vote also marks the comeback of the country's first democratically elected leader, Mohamed Nasheed, who, after being released by the courts, is running for a seat in the election.

The Maldives, which became a multiparty democracy in 2008 after decades of authoritarian rule, has been facing political turmoil since Nasheed's resignation in 2012.

Analysts say that both China and India are trying to outdo each other's influence on the Maldives.

While Yameen was in power, China had gained more political influence across the archipelago. Under Yameen, the Maldivian economy showed signs of improvement, although economists say the country's growth was partly due to aid and investment from China.

Beijing considers the Maldives an important route in its "Belt and Road" initiative, which, along with other objectives, aims to connect the Indian Ocean to Central Asia.

Solih's MDP is considered pro-India and wants to scale down Chinese influence on the Maldives.

Ahead of the 2018 presidential election, former President Nasheed had warned Maldivians that the vote could be their last chance to liberate the country from Chinese influence.