Sri Lankan President Maithripala Sirisena had triggered a constitutional and political crisis in the country by sacking Ranil Wickremesinghe in October. His reappointment, however, does not guarantee smooth sailing. 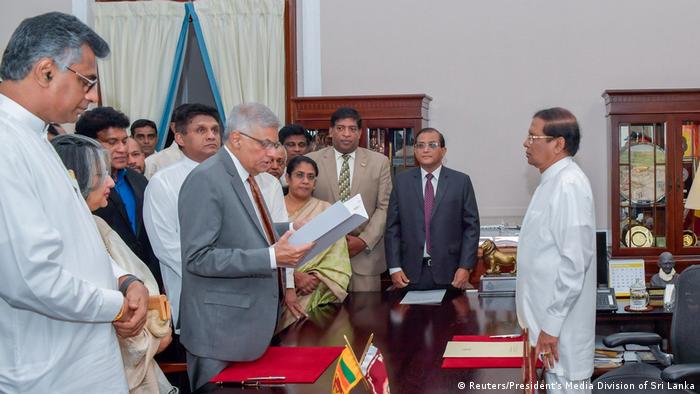 In October, Wickremesinghe's ouster had paralyzed the Indian Ocean island nation of over 21 million people. Wickremesinghe, with the support of parliament, refused to leave his post. President Sirisena tried to dissolve parliament in response, but the country's Supreme Court restored the legislative body, ordering a full hearing of Sirisena's actions.

The president had repeatedly said he would not bring Wickremesinghe back as premier of the South Asian country. Political observers have thus described Wickremesinghe's comeback as an embarrassment for the president.

But some say that Wickremesinghe's return was inevitable after Mahinda Rajapaksa – a former president who Sirisena had installed in Wickremesinghe's place – failed to win a majority in parliament on Saturday and subsequently tendered his resignation to the president.

Beginning of a fresh crisis?

Wickremesinghe was due to nominate his Cabinet on Sunday. His United National Party (UNP) said on its official Twitter account that the Wickremesinghe took oath on Sunday in a low key ceremony with only few lawmakers in attendance.

"Now I will assume duties of the office of prime minister," Wickremesinghe told his supporters after he was sworn in.

"Unfortunately, during the past few weeks, the progress of this country and the development programs that we undertook were installed," he said. "Not only that, the country went backward. Today, we commit firstly to bring back normalcy and resuming development programs," he added. 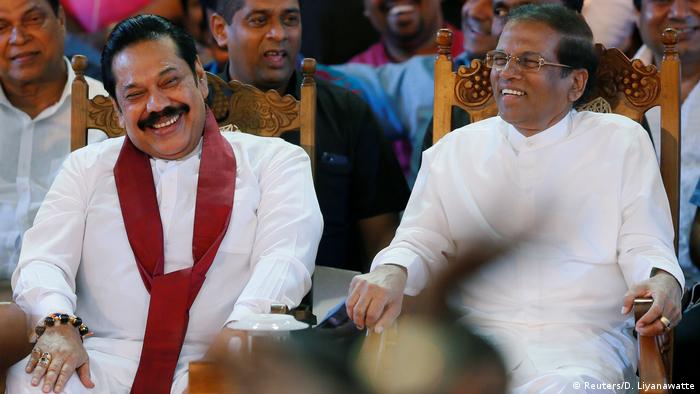 Wickremesinghe's comeback promises to ease the crisis but experts say it could also be the beginning of a new tense period between Sirisena and the prime minister.

The PM, however, has hinted that he would be willing to reconcile.

"It is a victory for Sri Lanka's democratic institutions and the sovereignty of our citizens," Wickremesinghe wrote on Twitter. "I thank everyone who stood firm in defending the constitution and ensuring the triumph of democracy."

Experts say the escalating political crisis in Sri Lanka has its roots in the geopolitical rivalry between the country's traditional ally, India, and rising global economic power China.

China and India have strategic interests in the Indian Ocean, and Sri Lanka, a key location for global shipping lines, is crucial for implementing them. Its biggest city, Colombo, is set to become part of China's New Silk Road project to transport goods to the West.

"The Sri Lankan crisis doesn't have much to do with Sirisena and Rajapaksa," Siegfried O. Wolf from the Brussels-based South Asia Democratic Forum (SADF) told DW. "It should be looked at in the light of a China-India tug-of-war in the region."

Sri Lanka's traditional ally India welcomed Sirisena's decision to reappoint Wickremesinghe. "This is a reflection of the maturity demonstrated by all political forces, and also the resilience of Sri Lankan democracy and its institutions," Raveesh Kumar, a spokesperson for India's Ministry of External Affairs, said Sunday.

"India remains committed to taking forward its people-oriented development projects in Sri Lanka. We are confident that India-Sri Lanka relations will continue to move on an upward trajectory," he added.

A setback for Beijing?

In a sign of support, Beijing was one of the few governments to congratulate Rajapaksa after he was appointed prime minister two months ago, with Beijing's envoy Cheng Xueyuan personally meeting him to convey the well-wishes of Chinese Premier Li Keqiang.

Rajapaksa's relationship with China dates back to the early years of his presidency. In 2007, Rajapaksa signed a $1 billion (€0.88 billion) deal with a Chinese consortium to construct the Hambantota port in the president's home constituency. Rajapaksa's administration later offered China an exclusive investment zone near the country's main port in Colombo.

Rajapaksa was close to China during his 2005-2015 presidency, while pro-Western Wickremesinghe is considered closer to India. The fact that Sirisena was bent on bringing his former rival Rajapaksa back to power shows how important Rajapaksa is for Beijing, according to analyst Wolf.

"The Sri Lankan 'coup' happened after Chinese economic interests were seriously challenged by Wickremesinghe's administration," Wolf added. "He tried to improve ties not only with New Delhi but also with the West."

The UN and the international community were also critical of Rajapaksa's handling of Sri Lanka's 1983-2009 civil war and launched an investigation into alleged war crimes and human rights abuses committed by his government in its efforts to end it.

A week before Sirisena ousted him, Wickremesinghe visited New Delhi on a three-day visit to improve ties with his country's powerful neighbor. Wickremesinghe's government also suspended construction on a Chinese-backed deep-water port at Hambantota in 2015.

Sirisena and Wickremesinghe had also reportedly clashed over the development of East Container Terminal in the Colombo port, with Wickremesinghe insisting that it should be developed through Indian investment, while Sirisena arguing that the Sri Lankan government should be the one to take it up.

The developments in Sri Lanka provide a snapshot of the growing geopolitical rivalry between India and China across the Indian Ocean. The two Asian giants are increasingly competing for influence in a number of countries, including Bangladesh, Nepal and the Maldives, where a pro-China leader, Abdulla Yameen, was recently voted out in a surprise election result.