Xi, Modi, Putin seek to strengthen multilateral world order | Asia | An in-depth look at news from across the continent | DW | 01.07.2019

The meeting between Indian PM Narendra Modi, Chinese President Xi Jinping and Russian President Vladimir Putin on the sidelines of the G20 summit reinforces the multilateral nature of the world today, say experts. 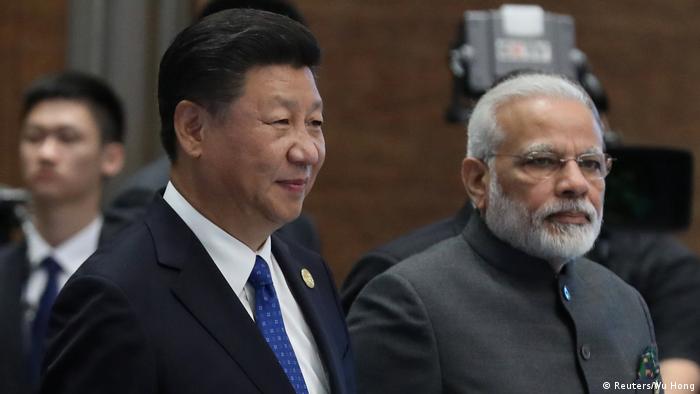 The three leaders' meeting in Osaka last week came days after they got together to discuss mutually relevant issues on the sidelines of the Shanghai Cooperation Organization (SCO) summit, which took place in the Kyrgyz capital of Bishkek earlier in June.

Over the past several years, Russia, China and India have all been adversely affected by growing tensions with the United States, especially after US President Donald Trump slapped tariffs on Chinese exports to the US and ended India's preferential trade status that allowed some of the South Asian nation's products to enter the US duty-free. In response, New Delhi imposed retaliatory duties on imports from the US.

Addressing the trilateral meeting in Osaka, Indian Prime Minister Narendra Modi said: "As developing economies, it is important that there is a discussion between us on the issues of economy, politics and defense." Modi also said that terrorism was a global challenge and must be effectively fought by the international community. India's foreign ministry spokesperson, Raveesh Kumar, tweeted a summary of Modi's speech during the talks.

India's foreign secretary, Vijay Gokhale, later said that the leaders also discussed multilateral challenges. "All three leaders agreed that in an era of economic and global change, it is important to maintain the trend of globalization, a free rule-based trading system, to oppose tendency towards protectionism." The three also spoke about steps to tackle climate change and enhance counterterrorism cooperation.

Significance of the talks

"After the US pulled out of the Trans-Pacific Partnership and the Paris Climate Change Accord — and given Trump's attitude toward the WTO and the sanctity of multilateral agreements in general — China, Russia, India and the developing world came together strongly in defense of the multilateral world order," political analyst Ravi Bhoothalingam told DW.

The meeting in Osaka, Bhoothalingam said, would help reaffirm their resolve to amicably settle their trade and technological issues with the US.

Andrew Cainey, an Asia expert at the London-based Chatham House, told DW that the meeting "highlights again the multipolar nature of the world today…the world is not just G2 [the US and China]."

However, India and Russia would also seek to act in their own interests, crafting their own multilateral strategies with other nations, Cainey said. "They can, no doubt, reach agreement on some issues: but their situations and interests are fundamentally different."

India, for instance, would have to balance its relations with the US and China, while continuing to import defense equipment from Russia. Additionally, "although they bemoan US 'protectionism,' these countries also have many protectionist attributes," Cainey said.

Challenge for the US

Political analyst Bhoothalingam said that following the trade-war rhetoric with China and India, Trump would "probably come up with something that defuses the situation — at least for the time being." And as predicted, Trump agreed to resume trade talks with China and said that Washington would not levy tariffs on all remaining imports from China — more than $300 billion worth.

The US president also announced that American technology companies could again begin doing business with Chinese tech giant Huawei, reversing a ban that was put in place in May.

Trump also promised Indian PM Modi "very big" trade deals. The talks marked a significant shift from the US president's statements  condemning India's retaliatory taxes on imports from the US. Trump also congratulated Modi on his election victory, saying, "It is a fantastic tribute to you and your abilities."

Trump's interaction with Russian President Putin was similarly friendly, with Trump playfully saying, "Don't meddle in the election, president," as they spoke to reporters.

Chatham House expert Cainey says the US needs to understand the significance of its actions. "The challenge for the US — or, at least for some US leaders and policymakers — is understanding that US actions create their own reactions and second-order changes."