Muslims in India are reportedly facing a surge in threats and fake news targeting them, after a religious meeting in March was identified as the source of a major infection cluster. Indian authorities deny these reports. 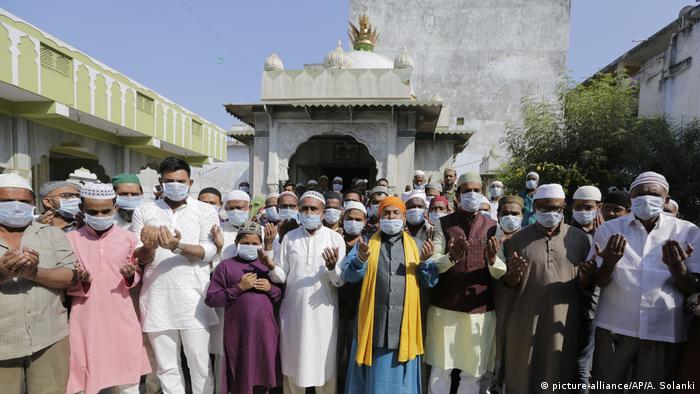 After the Indian government linked hundreds of coronavirus cases to a Muslim gathering in March, social media users began spreading angry messages and sharing fake news articles purporting that Muslims were conspiring to spread the virus.

The accusations started taking hold after a surge in coronavirus infections was found to be linked to a three-day meeting of an Islamic missionary group, the Tablighi Jamaat, that took place in March in New Delhi. Around 8,000 people had gathered at the meeting site, which then became a hot spot for the virus. The group's chief, Maulana Saad, was later charged with culpable homicide and negligence.

"It was an unprecedented situation and imprudent to believe that a religious leader could know more than the authorities themselves. It took time for everyone to realize the implications of the pandemic. But soon everybody fell in line and followed the guidelines," Fuzail Ayyubi, Tablighi Jamaat's lawyer, told DW.

Nevertheless, the outcome was that many Muslims faced renewed stigma, threats, and boycotts in India, a country where growing Hindu nationalism, encouraged by the national government, had already been increasing hostility toward Muslims.

Divisive debates on television and Islamophobic social media trends and hashtags have added fuel to the fire. Dozens of fake videos showing Muslims flouting social distancing rules and spitting on people have circulated over social media.

In addition, many violent incidents have taken place across the country during the coronavirus pandemic; a Muslim man was beaten up by a mob in Delhi, vendors were refused entry into localities, people refused to buy from Muslims and a hospital reportedly segregated coronavirus patients by their religion.

Last week, police arrested a bakery owner in the southern city of Chennai for advertising that it did not employ any Muslims.

Some members of Prime Minister Narendra Modi's Bharatiya Janata Party (BJP) party, which embraces Hindu nationalism, have openly blamed Muslims for the spread of the virus. However, on April 19 Modi reacted to the accusations against Muslims, issuing a statement asking Indians to stand united in the fight against the virus.

"COVID-19 does not see race, religion, color, caste, creed, language or border before striking. Our response and conduct thereafter should attach primacy to unity and brotherhood. We are in this together," Modi wrote on his LinkedIn page.

The chairman of the Delhi Minorities Commission, Zafarul Islam Khan, has also been vocal on the issues faced by the Islamic community. Yet earlier this month, authorities registered a case of sedition against him for having thanked the Kuwaiti government on Twitter for speaking in favor of Indian Muslims.

Academics believe that epidemics fuel mistrust between people, as communities seek ways to blame their plight on outsiders or those on the margins of society.

"During times of crisis, people revert to their identities and search for others to blame for their problems," said Asim Ali, a researcher at the Center for Policy Research in New Delhi.

"Pandemics have a long history of scapegoating, starting from the Bubonic Plague in the 14th century, where Jews were accused of poisoning wells and spreading the contagion," he said.

Read more: Rajdeep Sardesai: 'Corona has reminded us what news is supposed to be'

"Even before this incident [Tablighi], Muslims have been boxed into a corner. A section of the ruling party and the media never fail to exploit any situation where they can paint Muslims as a group of traitors, a threat and a problem for India," Zafarul Islam told DW.

"I have not complained about my country to any foreign government or organization nor do I intend to do so in the future," he added. "I am a patriot to the core and I have always defended my country abroad. However, I have always been vocal about the problems in our country."

"He endangered the unity and integrity of the country, tried to tarnish the secular image of India, and tried to spread hatred between Hindus and Muslims," said BJP legislator Ramvir Bidhuri.

The current crisis for Muslims comes after February riots against an anti-Muslim citizenship law left over 50 people dead in Delhi.

To try and slow the coronavirus spread, India instituted a national lockdown in March, which disoriented many and left them struggling to understand how a virus could so dramatically upend their lives.