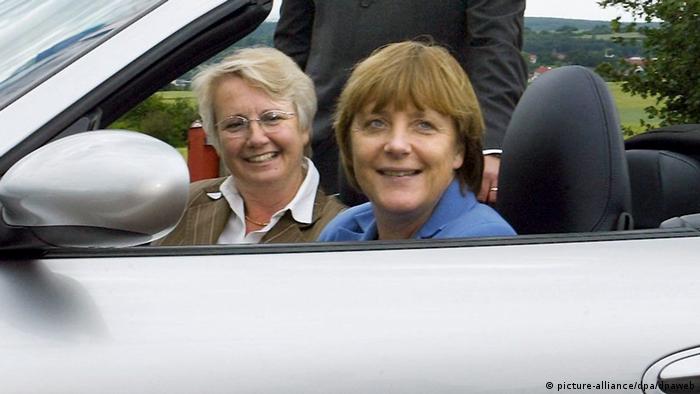 In a parallel universe in which the Berlin Wall had never fallen, Angela Merkel might today be traveling around the US in a Trabant instead of in the twilight of her chancellorship, she told German magazine Der Spiegel on Tuesday.

When asked what would have become of her if Germany had remained divided, Merkel first told her interviewers: "We certainly would not have met, that's for sure."

Read more: Opinion: German unification — time for the next generation to step up

When pressed on what she would be doing today, the German Chancellor said she could have realized her dream: "I wanted my first long trip to be to America."

"Because of its size, the diversity of it, the culture. To see the Rocky Mountains, drive around and listen to Bruce Springsteen — that was my dream," she said, referring to the US singer known for hits such as "Born in the USA."

After reiterating that she would also have liked to have explored Germany, the 65-year-old German chancellor who grew up in East Germany said that she would have been retired by now and thus permitted to leave what was known as the German Democratic Republic (GDR).

"In the GDR, women retired at age 60, so I could have picked up my passport five years ago and traveled to America. Retirees had the freedom to travel in the GDR — anyone who was no longer needed as a socialist worker was allowed to leave," she told Der Spiegel.

When asked if she would have taken an American car, she demurred. "No — I'm a friend of smaller cars. But what could have been better than a Trabant?"

Her comments come as Germany reflects on the 30 years since the 1989 fall of the Berlin Wall ahead of the November 9 anniversary.

Growing up in the impoverished and less developed East, Merkel entered politics only in her mid-30s as communism crumbled.

In the interview, the German Chancellor also cautioned that disillusionment and discontent with the German government did not give people any "right to hatred," a thinly-veiled reference to the electoral success of the far-right Alternative for Germany (AfD) party in recent months.

"I know that for many East Germans, life became free but not simpler after the peaceful revolution," she said. "But you have to be clear: even if you're not happy with public transport, medical care, the state, or your own life, that doesn't give a right to hatred and contempt."

Rise of far-right at home and abroad

The AfD has polled over 20% and finished second in state elections in Saxony, Brandenburg and Thuringia in the past two months, where people continue to feel disadvantaged 30 years after German reunification.

Disillusionment with the German Chancellor and her government in recent years, fueled particularly by the 2015 influx of migrants, has been felt strongest in the east.

She told Der Spiegel that as Chancellor, she has responsibility for all Germans, "so the assumption that I should take care primarily of the interests of eastern Germans is wrong but, if you follow it, it of course leads to disappointment."

Read more: Germans happier in a reunified country, 30 years on

She also emphasized there was a need for better "inner-German dialogue" between former East Germany and the west.

Merkel's desired destination, traditionally seen as synonymous with freedom and opportunity, has undergone a political shift to the right in recent years as well.

US President Donald Trump has repeatedly called for the construction of a wall of his own along the US-Mexico border since taking office in 2016, in addition to moving forward with policies which aim to curb both legal and illegal immigration.

On Saturday, a US judge blocked Trump's efforts to insist on immigrants having health insurance before they are granted a visa.

Compelling attempts to escape the GDR

Some East German residents went to great lengths to escape a repressive GDR regime. On the anniversary of the fall of the Berlin Wall, here's a look at some of the more acrobatic of those brave flights for freedom. (09.11.2018)