People in Germany are happier than they have been in the last three decades, according to a new survey. Even former East Germans are becoming more optimistic, though they still harbor differing political views. 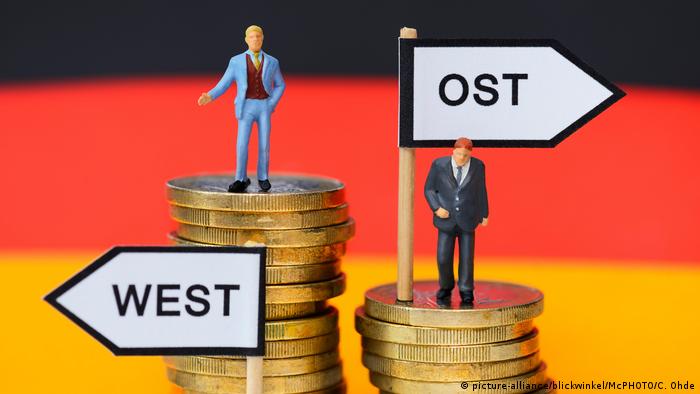 The increase in happiness was particularly dramatic in the former East Germany, despite that region's lower economic success overall. The conclusions were from a Pew Research Center survey released on Friday, which found that majorities in both the former East and the former West of the country now rate themselves at 7 or higher on a 10-point scale of life satisfaction, with 10 representing "the best possible life."

In Pew's previous questionnaires in 1991 and 2009 no more than roughly half of Germans in both areas of the country put themselves in that tier. The increase was particularly dramatic in the former East, where the proportion giving themselves the top happiness rating has almost increased four-fold, from 15% in 1991 to 59% this year.

That personal satisfaction also largely extends to society: Germans also overwhelmingly think that the reunification of their country 30 years ago was a positive development, despite the continued economic and political disparities between the two areas.

The Pew survey found that large majorities of both regions say that the fall of the Berlin Wall in 1989 and the subsequent reunification a year later had a good influence on living standards, health care, national pride, family and spiritual value and law and order.

And yet a closer look at the results also reveal old disparities between the two. Dissatisfaction with the country's democracy, for instance, is notably more marked in the East, where 47% are not satisfied with the performance of the democratic system, against 50% who are satisfied. The numbers in the West are 61% satisfied and 37% dissatisfied.

The differences are more marked when it comes to politics. People in western Germany tend to have a more favorable view of the European Union than their eastern counterparts: 72% vs. 59%. And, as election results have borne out, are only half as likely to have a favorable view of the far-right Alternative for Germany (AfD): 12% to 24%.

Furthermore, people in the West tend to harbor more favorable views of minorities: while 36% of former East Germans have a negative view of Muslims, that number is only 22% in the former West.

Eastern Germany suffered a population drain and economic trouble in the aftermath of reunification.

Read more: How strong is democracy in former Eastern Europe?