East Germany: A failed experiment in dictatorship | Germany | News and in-depth reporting from Berlin and beyond | DW | 07.10.2019 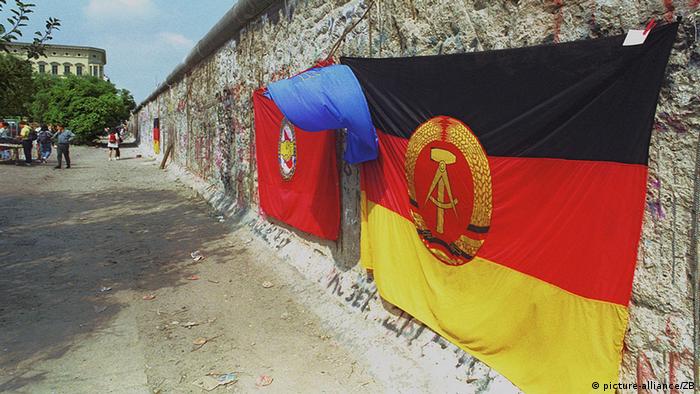 The partitioning of Germany was a reflection of the claims laid down by the victorious Allied forces in 1945. On one side there were the US, France and the UK; on the other, the Soviet Union. They had joined forces to defeat fascist Germany, but went their separate ways after that.

The Western Allies established a parliamentary democracy in West Germany, while Soviet dictator Josef Stalin's territorial dominion spread across almost all of Eastern Europe. The most clearly recognizable characteristics of Eastern European states: Planned economies, no rule of law, no freedom of the press, no freedom of movement. Poland, Hungary, Romania and East Germany were just some of the countries forced to live under those rules until the fall of the Iron Curtain in 1989/1990. Ideologically, they saw themselves as people's democracies, but were, in fact, dictatorships.

East Germany occupied a special geographic and political role within the Eastern Bloc, for free Europe was situated at its western border. Moreover, the similarly divided city of Berlin — the former capital of Nazi Germany — was situated in the heart of its territory. The city had been a symbol of Nazi Germany and all of the Allies wanted a piece of it. Thus, West Berlin also became an island of freedom in communist East Germany.

Read more: How did West Germany respond to the building of the Berlin Wall?

In divided Berlin, the clash between the competing systems of capitalism and socialism could not have been more stark. The city, with a total of 3.3 million residents, was the hotspot of the Cold War — and, until 1961, it was also the hole through which refugees fled. But that hole was plugged with the construction of the Berlin Wall in 1961. Until that point, more than one million people, fed up with the economy of lack and the intellectual climate of an unfree society, had turned their backs on the GDR.

After the Wall went up, people across Germany became ever more estranged. Still, West German Chancellor Willy Brandt's policy of detente with the East led to diplomatic rapprochement in the 1970s. Brandt, a Social Democrat, was awarded the Nobel Peace Prize for his efforts. In 1973, both German states became full members of the United Nations (UN), cementing their existence.

Despite that, relative stability in the GDR was short-lived, lasting only a few years. The regime was simply not economically viable. Historian Frank Bösch says economic hardship was one of the main reasons for the collapse of the East German dictatorship. As an example, Bösch, who is director of the Leibniz Center for Contemporary History Potsdam (ZZF), points to the large amount of debt the GDR had amassed with Western countries.

He says another contributing factor was the dissatisfaction of the citizenry, "which manifested itself in an incredible desire to leave." When Mikhail Gorbachev, who was seen as a reformer, took the helm in the Soviet Union in 1985, many people in the GDR hoped he would also bring change to their system. Yet, East German leader Erich Honecker remained steadfast.

The people expressed their anger not only through mass demonstrations in the streets, but also by filing in ever more applications for permission to travel outside the GDR. Within two years, the number of applications for travel documents doubled from 53,000 to more than 105,000. That said, only a fraction of applicants were in fact allowed to travel outside the country.

Honecker and the Ministry for State Security, known colloquially as the Stasi, could no longer halt the collapse of the GDR. People were also protesting in other East European countries, especially Poland and Hungary. Historian Bösch says that was only possible because the Soviet Union had dismantled its traditional military support for local regimes.

On October 7, 1989, the communist regime celebrated the founding of the GDR for the very last time: 40 years of the German Democratic Republic. Just one month later, on November 9, the Berlin Wall fell. Millions of Germans, in both the East and the West, were ecstatic. Still, that was not the death knell for the GDR; that would not come for another year, on October 3, 1990, when Germany was reunified.

Meanwhile, the relatively small country, which had only 17 million residents before it was dissolved, has spent the past 29 years as part of the larger Federal Republic of Germany, today home to 83 million people. Still, no one would think of describing the whole as a unified fatherland. The economy in the west is far stronger than in the east. Workers earn more in the west and very few companies have managers from the east.

Frank Bösch also points to the different attitudes and memories that characterize people from the former GDR: "East Germans have different taste in music and media, they travel differently and make political decisions differently as well."

The historian says he is not betting on assimilation happening any time soon, saying it will take a long time before the GDR disappears from the minds of its former citizens like it disappeared from the world. He says lived history encompasses roughly three generations. Many people know what their grandparents went through because of family stories.

Read more: The next generation must step up for German unification

"The Berlin Wall and similar things have become such powerful icons that they will remain present as living memories for some time to come." Pointing to experience with the legacy of Nazism, Bösch predicts the GDR will not truly become a closed chapter in history until 70 or 80 years from now.

Looking back to the era of Nazism that preceded the separation of Germany, he says that dark chapter of history is only now slowly coming to an end as "the last witnesses are no longer alive." Using that metric, the chapter on the GDR won't be closed until 2070 at the earliest.

Berlin honors victims 58 years after the Wall was built

Victims of Berlin's former Soviet-era Wall, whose construction began 58 years ago, are being remembered in the capital. German President Frank-Walter Steinmeier has warned of 'new walls' in electoral thinking. (13.08.2019)

A trip back in time: divided Berlin

In the GDR, art was meant to serve the state. Pressure on creative artists grew after the Berlin Wall was built, but pop art still managed to thrive.