How did West Germany respond to the building of the Berlin Wall?

West German protests against the construction of the Berlin Wall couldn't change anything. So politicans took a different approach toward achieving long-held dreams of reunification - Willy Brandt in particular. 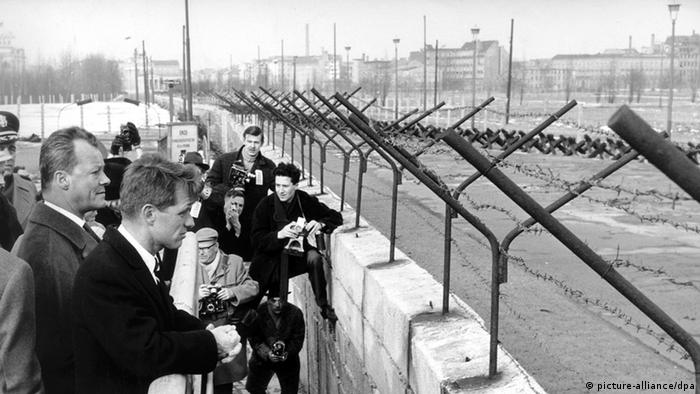 "We began to get the news at two in the morning. At 3:38, the first reports started coming through the radio that the sector junctions were being blocked by barbed wire."

It was Willy Brandt, Social Democratic candidate for chancellor and governing mayor of Berlin, who informed the city and the rest of the world about the construction of the Berlin Wall, which began in August 1961. He broke off his campaign travels and gathered the members of government in West Berlin for a special meeting. There, he protested before Western allied commanders of the United States, Great Britain, and France: "The Berlin Senate publicly condemns the illegal and inhuman measures being taken by those who are dividing Germany."

Brandt passionately continued, "The cold concrete stakes that cut through our city have been driven into the heart of German unity and into the living organism of our single city of Berlin."

Like Brandt, Christian Democrat Chancellor Konrad Adenauer was also in the middle of the election campaign. He arrived in Berlin nine days later, by which point US Vice President Lyndon Johnson had already arrived. On the day construction began, Adenauer gave a matter-of-fact radio address: "In association with our allies, all the necessary countermeasures will be taken ... It is an hour that needs to be met with strength, but also calm in the face of challenges from the East." 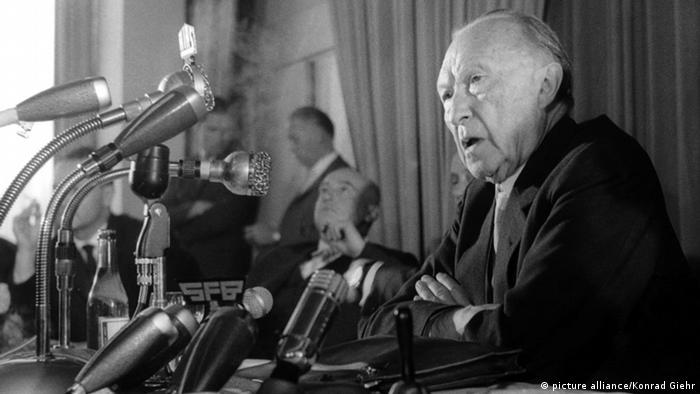 Willy Brandt also called for prudence, but he held on to the hope of overcoming the separation, saying "Never could man be kept permanently enslaved … We will never come to terms with the brutal division of this city, with the unnatural division of our country."

Helpless onlookers in the West

"The East acts - and what does the West do? The West does NOTHING!" read the headline of the mass-circulation Bild newspaper three days after the Wall went up.

Adenauer's reaction remained reserved. The Allies first protested three days later in Moscow. While this was going on, East Berliners and East Germans found themselves walled in. They were kept away from their friends and relatives at gunpoint.

Willy Brandt wrote to US President John F. Kennedy and asked him to take clear steps like protesting before the United Nations. Kennedy, however, reduced his involvement to symbolic gestures. Today we know he told his advisers, "A wall is a hell of a lot better than a war." As a sign of solidarity, he sent Vice President Johnson and 1,500 additional US soldiers.

But these soldiers did not interfere while East German refugees were shot dead at the border. The first fatalities occurred eleven days after the construction of the wall. As people were killed on the east side of the wall, those in the West looked helplessly on.

In 1962, 18-year old bricklayer Peter Fechter was badly wounded by shots to the stomach and back as he attempted to escape. He lay calling for help for an hour, slowly bleeding to death. Neither West Berlin police nor American soldiers dared to enter East Berlin territory.

Fechter fell silent in front of hundreds of terrified West Berliners before the GDR border guards carried him away. In the first 10 weeks of the Wall's existence, 15 died along the border with West Berlin. But it wasn't only refugees who were killed by the Wall. Turkish immigrant Cetin Mert from the Kreuzberg district drowned in the Spree River on his fifth birthday. West Berlin rescue services were quick to the scene, but the river belonged to the GDR, whose rescue services declined to intervene. 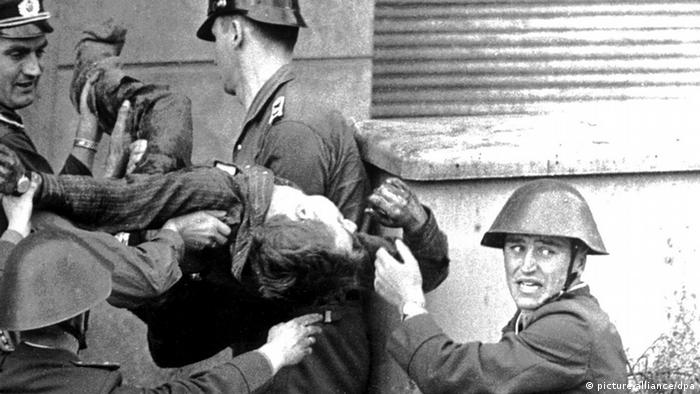 More than thirty years later, East German border guards were charged with manslaughter over the death of Peter Fechter

Whoever wanted to change the situation had to find new ways to do so. In 1963 Social Democrat Egon Bahr, a spokesman for Willy Brandt, developed the idea of "change through rapprochement," a concept conservatives at the time rejected.

Today, however, their attitude has changed. Current Chancellor Angela Merkel and Christian Democrat said in 2014, on a national holiday celebrating German Unity, "Next to Konrad Adenauer's alliance to the West, it was Willy Brandt's Ostpolitik which laid the foundation that Helmut Kohl later used for reunification negotiations with the Soviet Union." 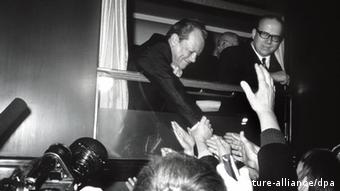 Willy Brandt was greeted by jubilant crowds in Erfurt

The first attempts to approach the East came during the 'grand coalition' administration of 1966-1969, when Willy Brandt was foreign minister. In 1969, Brandt became chancellor of a social-liberal coalition of his SPD and the Free Democrats, and was able to more clearly determine policy guidelines.

Already in his first speech on policy he spoke of two states in Germany, making clear that to each the other was not a foreign country. He quickly introduced his new Ostpolitik: Agree to disagree with the Soviet Union in order to diffuse tension in Europe before resolving the German question. Brandt then signed the first of his treaties with the Soviet Union, and an agreement with Poland soon followed.

He first meeting with Willi Stoph, formally the head of East Germany's government, came in 1970. He traveled to the then East-German city of Erfurt "without illusions" as he put it at the time: "We have lost our unity and there is definitely no going back." The citizens of Erfurt received him with enthusiastic chants of "Willy, Willy" - a humiliation for his host, as the cheers were for Brandt, not Stoph.

Contracts with the enemy

In 1972, a basic contract was signed between the two Germanys, accompanied by a "Letter on German Unity." This made clear that the Federal Republic of Germany held on to the goal of German unity, as it described in Germany's Basic Law. The conservative-governed state of Bavaria brought the contract before the Federal Constitutional court, because they believed it hurt chances of reunification. The court rejected their suit. 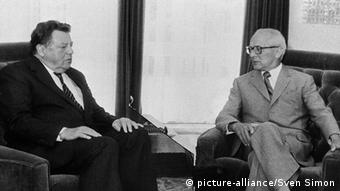 Ironically, Bavarian Prime Minister Franz-Josef Strauss, a declared arch-enemy of the communist GDR, made a business agreement a decade later with his eastern neighbor, as the East found itself in a serious financial crisis. In 1983 he met GDR foreign currency procurer Alexander Schalk-Golodkowski and head of state Erich Honecker. Strauss agreed to a loan of billions from the West to the East.

This infuriated some fellow party members so much that they resigned from his CSU, the Bavarian sister party to the Christian Democrats. The GDR subsequently removed its automatically triggered machine guns from the inner-German border and agreed to facilitate travel between the two German states.

Two Germanys on the international stage

The contract in 1972 was the basis for several other steps: Both countries were members of the United Nations, and agreed on permanent missions and held negotiations in the Conference on Security and Cooperation in Europe (CSCE).

In 1975, Brandt's successor, Helmut Schmidt, along with Erich Honecker, signed the Helsinki Accords, a statement on the inviolability of borders and respect for human rights. East German civil rights activists would later invoke this for their cause.

Brandt himself had a bitter experience with the East at this time. Günter Guillaume, who for years had been a close associate, turned out to be an East German spy, forcing Brandt to resign in 1974. His Social Democratic colleague Helmut Schmidt became chancellor and began his own political course. In 1981 Schmidt also traveled to the GDR. This time, the visitor from the West was kept away from the crowds, so that no one would cheer for the wrong leader again. 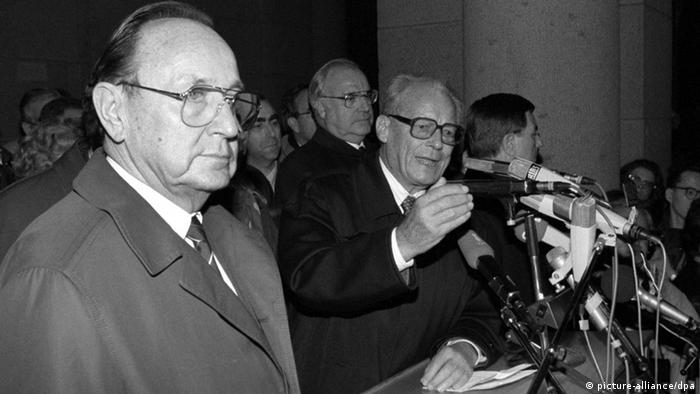 After Helmut Kohl replaced Schmidt, the complaints about Germany's division grew ever louder, though inter-German politics maintained the status quo. Kohl implemented the NATO Double-Track Decision, which Schmidt had signed. Though the East had claimed it would freeze relations with West Germany, the threat was hollow.

In 1987, Helmut Kohl received Erich Honecker, the first East German head of state to visit West Germany. Again and again, the West pulled out its checkbook to bail out Wall refugees and East German dissidents.

When the Berlin Wall fell on November 9, 1989, Chancellor Kohl cut his state visit to Poland short and traveled to Berlin. At a rally in the front of the town hall in Schöneberg district, he spoke to the people of Berlin side by side with former chancellor Willy Brandt. Brandt recalled his prediction that "Berlin will live and the Wall will fall."

Visibly moved, the man who had publicly denounced the Wall's construction in 1961 as Germany's division was cemented now said, "I am grateful to the Lord God that I am allowed to witness this … that the pieces of Europe are growing together again."