Meeting in Berlin, the top diplomats of the US and Germany have lauded their alliance. Twenty-five years after the fall of the Berlin Wall, they also acknowledged the threat to peace posed by the ongoing Ukraine crisis. 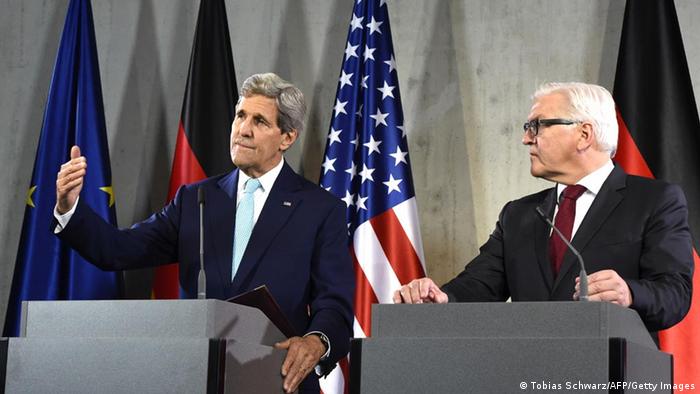 US Secretary of State John Kerry met with German Foreign Minister Frank-Walter Steinmeier in Berlin on Wednesday, just over a fortnight ahead of the 25th anniversary of the fall of the Berlin Wall, and amid a series of conflicts that threaten security in Europe and around the world.

The two foreign policy chiefs had the crisis in eastern Ukraine on their agenda, as well as the ongoing onslaught by jihadists in Iraq and Syria that call themselves the "Islamic State," referring to their aim of erecting an Islamic caliphate in the Middle East.

"The world is at risk of losing its bearings," Steinmeier told reporters after his talks with Kerry. "There is still enough explosiveness in eastern Ukraine to threaten political stability on our continent," he went on.

"It is our task to prevent Europe from ever becoming divided again," Steinmeier said, words that fell on receptive ears from his counterpart.

"We call for an end to Russian aggression in Ukraine," Kerry said, expressing hopes that the disputed country could one day function as a "bridge between Russia and the West."

With the fallout from the Ukraine crisis renewing fears of a diplomatic meltdown between Russia and the West, Kerry and Steinmeier used the occasion to recall the symbolic significance of November 9, 1989, the day the Berlin Wall was opened.

"For years, the Wall was a burning glass of the Cold War," Steinmeier said, imploring that the lessons learned during that dramatic time period not be forgotten. "Without the unconditional support of the United States, it wouldn't have been possible to bring an end to the division. Germans will not forget what the Americans did."

Kerry, referring to the time he spent living as a child in the American sector of the German capital, stressed how "proud" he was of Berlin and what it "continues to mean to the world."

"What happened here 25 years ago is lasting evidence of what people can do when they stand together," he said after laying a wreath with Steinmeier at a Berlin Wall memorial.

Kerry was scheduled to meet with Chancellor Angela Merkel following the talks with Steinmeier. The meeting comes after a difficult phase in US-German relations, when the extent to which the NSA surveyed German intelligence and politicians - including the tapping of Merkel's personal cell phone - came to light this past summer.

EU to mediate in gas dispute between Ukraine and Russia

Moscow and Kiev may be approaching a gas deal ahead at key talks in Brussels. German Chancellor Angela Merkel has called on Kyiv to shoulder more responsibility in the dispute. (21.10.2014)

Fighting between Ukrainian government forces and pro-Russian rebels is intensifying over the Donetsk airport, prompting dialogue between Moscow and Washington and straining a month-old ceasefire in Ukraine. (03.10.2014)