German victims of Stalinism get recognition with Last Address initiative | Germany| News and in-depth reporting from Berlin and beyond | DW | 03.09.2019

German victims of Stalinism get recognition with Last Address initiative

A Russian human rights group has unveiled its first Last Address plaque in Germany. The memorial, located outside a home in Thuringia, is part of an initiative commemorating victims of Soviet persecution. 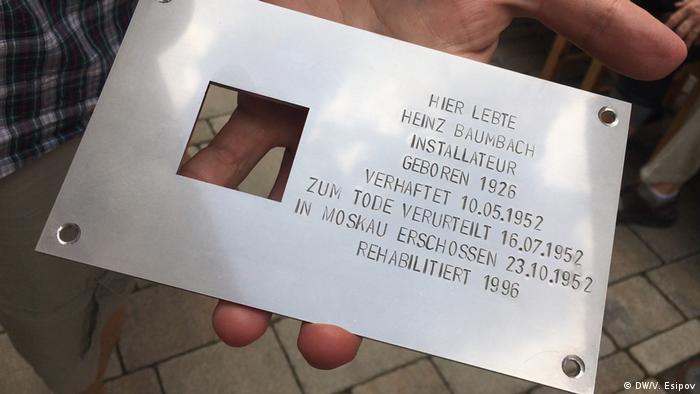 Tanja Hartmann has prepared a brief speech, but after reading the first few sentences, she breaks down in tears. Holding a small plaque of galvanized steel with a punched-out square in her hands, her mother stands beside her, also in tears.

It is Memorial's 980th such plaque — part of the Russian human rights group's Last Address initiative — but the first one unveiled in Germany.

For Tanja Hartmann's family, it's the end of a long search for their grandfather, Heinz Baumbach. He disappeared without a trace after a local policeman asked him to come to the town hall.

'Flee to the West'

Heinz Baumann's mother was immediately suspicious of the police request, and urged him to "flee to the West." The unguarded inner-German border was only a few minutes away from their house. Heinz, however, went to the town hall. He was convicted of "anti-Soviet activities" by a Soviet military court and shot three months later.

Decades later, the commemoration ceremony at his last address in Treffurt, Thuringia, was modest, but touching. 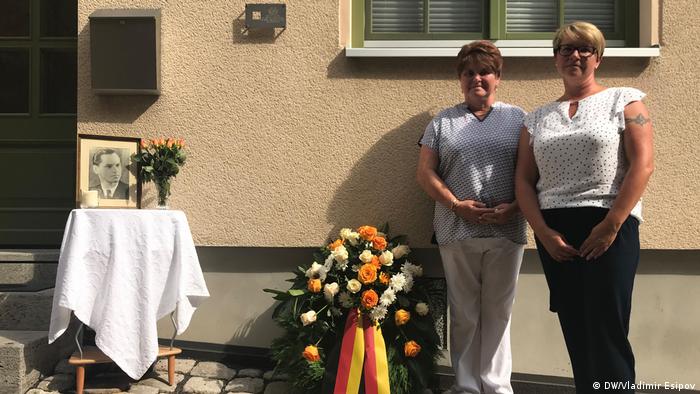 Tanja Hartmann's family heard about the Last Address initiative from Mario Bandi, a Russian-born journalist who lives in Berlin. The family had been trying to find information about their grandfather's fate since 1993. "Of course, we didn't hesitate a minute. This is the last great honor we can pay Heinz Baumbach," says Tanja.

No one ever spoke or was allowed to speak about the fate of victims of Stalinist repression in East Germany, she says. In 1966, a forged death certificate from Moscow arrived in Treffurt, according to which Heinz Baumbach died a natural death in 1954. In 1996, three decades later, the family received a rehabilitation notice from Moscow.

Raising awareness for victims in Germany

Lagergemeinschaft Workuta coordinator Stefan Krikowski's father Johannes was a victim of repression in the early 1950s. The young East German called for free and secret elections — and was sentenced to 25 years in Vorkuta for alleged espionage for the French secret service, his son says. In 1955, West German Chancellor Konrad Adenauer signed an agreement with the Soviet government on the release of the last German prisoners of war, and Johannes Krikowski returned home along with thousands of political prisoners.

His father suffered from post-traumatic stress disorder until his death in 2007, says Krikowski. In 2013, he and other three former Gulag prisoners from East Germany visited Vorkuta to understand what his father had been through. It is, he says, his duty to dedicate himself to the commemoration of the Gulag victims in Germany. They are given much less room than the victims of National Socialism, although communism was just as brutal a 20th century dictatorship, he argues. 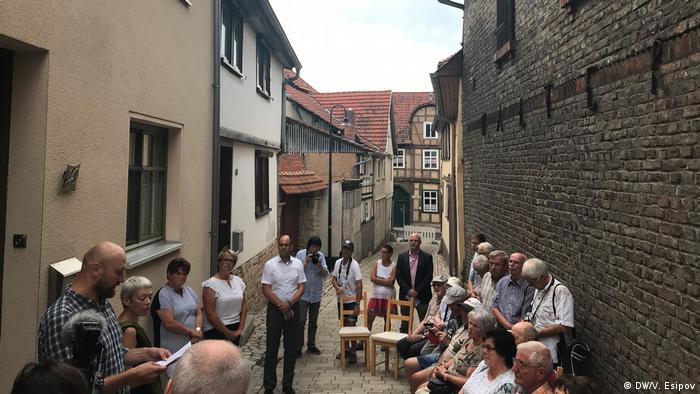 The Last Address plaque in Treffurt is the first in Germany

'The pain is passed on' to the next generation

Last Address was initiated in St. Petersburg in 2014, and Germany is the sixth country to have a commemorative plaque, says the group's curator, Nikolay Ivanov. "We want to point out the fate of ordinary people and show how easy it was to forge criminal cases," he says. The commemorative plaque is intended to remind people that there were innocent victims of Soviet state terror in Germany, too.

"Once more, it has become clear what it means for families when a member simply disappears and you don't hear anything for years," says Anke Giesen of Memorial Germany. "The pain is passed on from one generation to the next."

Memorial activists want to put up commemorative plaques at other houses, too, says Giesen. But unlike the tens of thousands of "stumble stones" fitted into sidewalks in front of the last place of residence of victims of the Holocaust in Germany, the homeowner's consent is required to affix a plaque — and that is not always easy to get.