Bruce Springsteen: An icon of freedom in East Germany 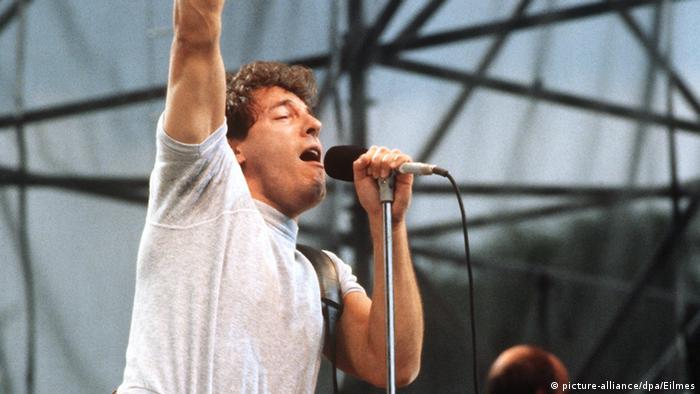 With a guitar slung across his well-toned body, Bruce Springsteen has spent his career singing iconic, gravel-throated songs of hope and despair over the American dream.

As the 30th anniversary of the fall of the Berlin Wall is commemorated, Germans also recall Springsteen's "Born in the USA" as an anthem for democracy in the former East Germany. The song's refrain boomed out of East Berlin during a massive 1988 concert that was a harbinger for the fall of the Wall a year later.

Even Angela Merkel recently revealed that she too was a fan of The Boss. 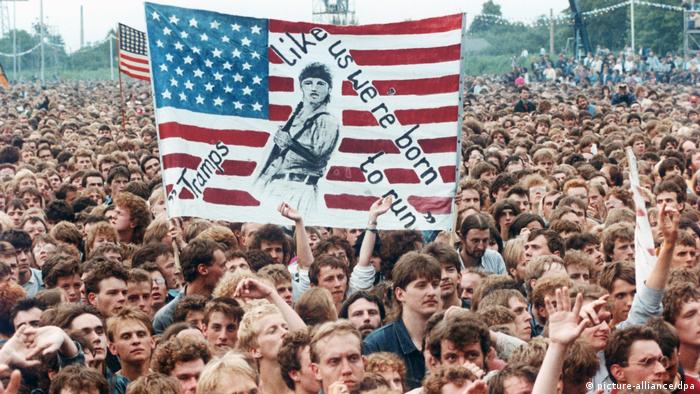 Born in 1949 and raised in a small town in New Jersey in a struggling working class family, Springsteen, inspired by Elvis Presley, the Rolling Stones and the Beatles, got a guitar and started playing gigs with his first band, the Rogues, at age 16.

In 1972, he recorded his album Greetings From Asbury Park, N.J. with musicians who became the legendary E Street Band. Albums like The Wild, The Innocent, and The E Street Shuffle were soon released, with critics hailing Springsteen, still only 25, as the "new Bob Dylan." But sales were slow.

That changed with the 1975 album, Born To Run, which cemented the young singer-songwriter's place in American rock folklore. The title song articulated the desire for breaking free from desolate small town life and hitting the road in search of liberation, which Springsteen did during his first coast-to-coast tour that helped Born To Run hit number 3 on the Billboard charts.

Springsteen had became a working class hero, a folk-rock poet who gave a voice to the downtrodden. But in melancholic songs like "Jungleland," he also invoked the impossibility of breaking free and questioned the myth of the American dream.

Read more: How a 1976 concert shook the Berlin Wall 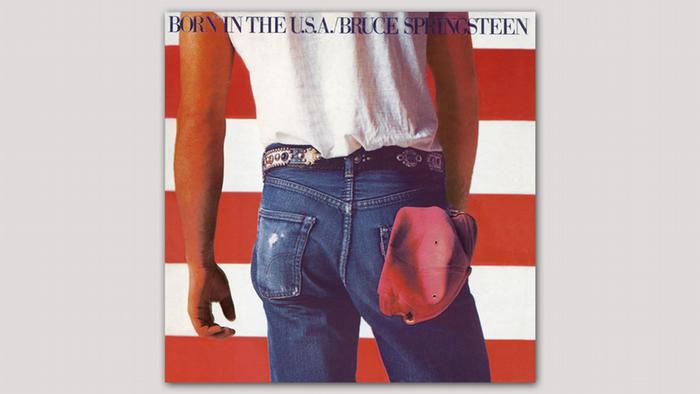 The cover to the album that made Springsteen a global phenomenon

'Born in the USA'

This theme was inherent in Springsteen's best-known rock anthem, 1984's "Born In The USA." No statement of patriotic jubilation, this protest song reckoned with the Vietnam War and the fate of the veterans who had not gained a foothold in a prosperous America. In the tradition of protest singers like Woody Guthrie and Bob Dylan, Springsteen laid bare the dark side of American triumphalism and shared his insight with a growing global audience. The world liked what it heard.

As Springsteen skyrocketed to international fame in 1984, he toured the world, filling stadiums and playing concerts of up to five hours. Springsteen, by then also known as "The Boss," and the E Street Band — including Steven van Zandt and Nils Lofgren on guitar, saxophonist Clarence Clemons, and his wife Patti Scialfa on backing vocals — were regarded by many as the best live act of their time. 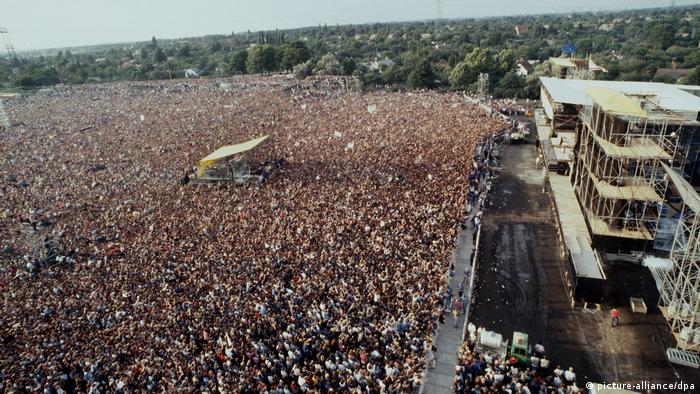 "The Boss" drew a massive crowd to East Berlin in 1988

Springsteen is one of the few western rock stars who performed in East Germany. On July 19, 1988 he gave the biggest stadium concert of his career at the Weissensee cycling track in East Berlin — 160,000 tickets were sold, but it's said that a crowd of 500,000 people celebrated the free spirit of a musical icon from the US, a country that continued to have strained relations with the East German regime.

Springsteen wanted to tell people to "tear down all wall," but he was heavily censored and instead told the crowds: "It's nice to be in East Berlin. I am not for or against a government. I came to play rock 'n' roll for you." But he did manage to add that he played "in the hope that one day all barriers will be knocked down."

Some believe the concert, the biggest ever to take place on GDR territory, played a part in sparking a protest movement that led to the fall of the Berlin Wall in November, 1989.

Springsteen was a big supporter of Barack Obama's 2008 presidential campaign, and at a November 2 rally for the candidate debuted the song "Working on a Dream" in a duet with his wife Patti Scialfa. He also endorsed Hilary Clinton in 2016.

In June 2019, The Boss released his most recent studio album, Western Stars, a record like none other in his career that suggested a career mellowing, especially in terms of sound. Rolling Stone magazine called it "a lushly orchestrated set of throwback, country-tinged folk pop that, despite some resemblance to previous works like Nebraska and The Ghost of Tom Joad, sounds like little else in his catalog."

No longer singing about rebellious working-class heroes, Springsteen this time explores the lives of washed up tough-guy D-grade actors. But these stories might offer hope when considering that a former reality TV show star, Donald Trump, is president of a USA that still permeates The Boss' oeuvre to this day.

Who is US rapper A$AP Rocky and why does Trump want to free him?

A rapper facing jail time for a street fight in Stockholm and a high-profile call from President Trump: Just what exactly is going on? Here's what you need to know about A$AP Rocky as his trial starts in Sweden. (30.07.2019)

Mark Knopfler's unique guitar playing made Dire Straits world famous. But he has never enjoyed life in the spotlight. As the musician who marked rock history turns 70, here's a look back at the anti-star's career. (11.08.2019)