Since Hong Kong's anti-government demonstrations began in June, the pro-democracy movement has been pleading for international support. And the recent confirmation of China's systematic internment of Muslim Uighurs in the country's western Xinjiang province has strengthened international calls for action against China's human rights abuses.

Now, human rights advocates and some German politicians are calling for German Chancellor Angela Merkel to take a stronger stance on human rights issues in China.

Last week, US President Donald Trump signed human rights legislation supporting the pro-democracy movement in Hong Kong, and on Tuesday, US lawmakers passed the "Uighur Human Rights Policy Act," which calls for "targeted sanctions" on members of the Chinese government.

However, during six months of unrest in Hong Kong, and the ongoing reports of minority oppression in Xinjiang, Chancellor Merkel has been careful not to explicitly support the pro-democracy movement, or condemn the internment camps.

"It is time for Angela Merkel to put it [Xinjiang] on the agenda of the upcoming European Council to talk of a common European perspective on imposing sanctions," Gyde Jensen, head of the human rights committee in the German Parliament, the Bundestag, told DW News Asia.

What has Merkel said?

In a speech to the Association of German Chambers of Industry and Commerce on November 27, Merkel said that Germany and Europe find themselves in a global competition. "There is, on the one hand, the United States, a haven of economic freedom, and on the other, a system in China, which is socially organized in a completely different way, with a pronounced state-owned, and sometimes repressive, character." During a meeting with Chinese Premier Li Keqiang, Merkel said Hong Kong's 'rights and freedoms' should be guaranteed

In November, Chancellor Merkel told the Bundestag that Germany must "of course criticize" when hearing reports of Uighur internment camps, without specifying whom, and added she supported the EU's position on the issue, along with allowing UN human rights officials access to Xinjiang.

On Hong Kong, she said, it was a "good sign" that the city's district elections were "peaceful," adding that the free expression of public opinion was an example of "one country, two systems."

Hong Kong's relations with Beijing since 1997 have rested on the concept of "one country, two systems," which recognizes Hong Kong as a part of China, albeit with a different economic and administrative system.

Hong Kong's pro-democracy movement demands a direct popular vote to elect the city's chief executive, but Beijing prefers to retain its power to appoint a Communist Party loyalist to the post.

After Merkel's visit to Beijing in September, Joshua Wong, a prominent Hong Kong pro-democracy activist, said he was "disappointed" that the German leader did not "clearly call for free elections in Hong Kong."

Katrin Kinzelbach, a professor of international human rights policy at Germany's University of Erlangen-Nuremberg, said that the German government should take a "clear position" on Hong Kong.

"The district election results show that Hong Kongers do not want to be 'directly' governed by Beijing," she said. "This message should be supported by the German government in public statements."

Parliamentary human rights chairwoman Jensen said on social media after meeting with Wong in September that Germany needs to "stand behind" the peaceful demonstrators in Hong Kong that are fighting for "liberal rights and the promise of one country, two systems."

Support for the Uighur?

Although Germany has joined 22 countries at the United Nations in signing an official statement condemning the Xinjiang Uighur internment camps, Berlin, and the EU, have yet to come up with a common framework for action, and Merkel has been criticized for being too soft in condemning the camps.

"The ongoing reports of more than a million Uighurs being held in camps in Xinjiang are absolutely appalling ... China must now undertake clear steps to improve the human rights situation in Xinjiang," said Bärbel Kofler, Germany's commissioner for human rights policy and humanitarian assistance, who plays an advisory role to the foreign ministry on policy questions.

"The extent of human rights violations has greatly increased under President Xi Jinping. It is inappropriate to court the Chinese party-state in this situation — as Germany is doing with a special EU-China summit scheduled to take place in Leipzig in 2020," said Kinzelbach.

Business as usual in China

After Merkel's China trip in September, the chief of German industrial giant Siemens, Joe Kaeser, warned Germany against taking too critical a stance, and advocated being "thoughtful and respectful" toward China.

"If jobs in Germany depend on how we deal with controversial topics, then we shouldn't add to indignation, but rather carefully consider all positions and actions," said Kaeser in an interview with German newspaper Die Welt.

Siemens, along with BASF and VW, operate factories in Xinjiang.

After the US human rights act was signed by Trump last week, activist Joshua Wong asked the German government to follow the example of the US and create a mechanism for sanctions.

However, the US is in the middle of an ongoing trade and economic dispute with China, and has more international clout. Berlin treads more carefully with Beijing and has tried to maintain a less volatile relationship as China is one of Germany's most important trade partners with bilateral commerce reaching €199.3 billion ($221.2 billion) in 2018.

"Unfortunately, we now have a very tricky situation that we are in a relationship of mutual dependency with China. For a democracy like Germany, it is not only morally problematic, but downright dangerous to bond so closely with a dictatorship." 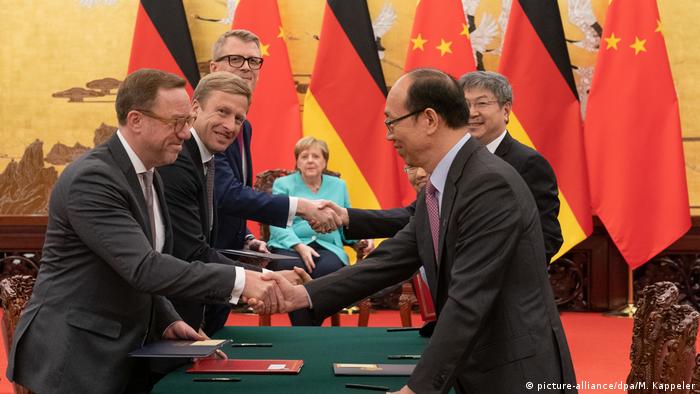 "Given the escalation in Hong Kong, it would be correct — and comparatively easy — to review existing export regulations," said Kinzelbach, adding that sanctions available to address human rights violations could include arms embargoes, restrictions on entry for individuals and the freezing of accounts.

"Europe should not export tear gas and ammunition to Hong Kong," said Kinzelbach. "A police district that uses excessive force should be afraid of consequences."

However, any sanctions regime targeting China-related human rights abuses would also have to be made within the framework of the European Union, and this is complicated by the disparity of positions in the EU on China policy.

"Germany could be a driving force within the EU on taking steps in this direction, but this hasn't happened yet," said Kinzelbach. "Unfortunately, Europe does not always speak with one voice to China."

Chancellor Merkel said in November that it would be "dangerous" for every EU state to conduct its own China policy, and for Europe to send different signals.

"In the long term, democracy and human rights should be put higher than economic profit, because we see that China is a dictatorship and you never know how economic growth can develop in a dictatorship," said Jensen.