China Cables: Germany under pressure to respond to Beijing′s Uighur internment | Germany | News and in-depth reporting from Berlin and beyond | DW | 25.11.2019

Leaked Chinese papers have revealed the largest internment of minorities since World War II. In view of the many German business ties with China, Berlin is under pressure to answer for its most important trading partner. 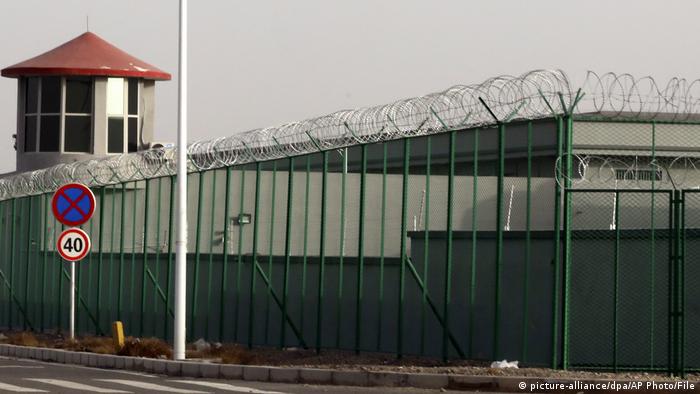 New documents leaked to the International Consortium of Investigative Journalists (ICIJ) have revealed the extent to which China is systematically surveilling and interning as many as 1 million members of its Muslim Uighur population in the country's northwest.

Observers are now calling on Germany, and those of its multinationals connected to companies complicit in the internment, to take action against China, Berlin's most important economic partner.

What do the new documents reveal?

Leaked documents from the years 2017 and 2018, published on November 24, have exposed "the mechanics of the region's Orwellian system of mass surveillance and 'predictive policing,'" the ICIJ wrote.

A computer system dubbed the "Integrated Joint Operation Platform" reportedly sifts through mass amounts of surveillance data about Uighur populations to single out individuals engaging in "suspicious behavior" as innocuous as frequent praying and traveling. This information was used to intern more than 15,000 Uighurs in a single week in June 2017 and as many as 1 million people in total, according to the documents.

China insists the camps are mere "reeducation centers" used to alleviate poverty in the region and fight radicalization. "Students" were there voluntarily and could leave of their own volition, Beijing insisted.

Documents obtained by the ICIJ paint a different picture. Classified operation manuals tell guards how to double-lock doors to prevent "breakouts." Uighurs must also renounce their faith upon entering the camps and follow the state's communist ideology.

The Chinese government told ICIJ partner the Guardian that the documents amounted to "pure fabrication and fake news." It also doubled down on claims that the centers were there to "prevent terrorism" in the region.

But Ulrich Delius, director of the Society for Threatened Peoples, told DW that on the contrary, the so-called China Cables help observers better understand a case of systematic subjugation they have followed for years.

"It is, in principle, an extermination campaign against Muslim nationalities," he said.

Tech and big data are at the center of the story of "the largest mass internment of an ethnic-religious minority since World War II," the ICIJ wrote. And Munich-based multinational Siemens has connections to one of the companies involved in the gathering of data on the Uighurs.

The "Integrated Joint Operation Platform" used to track and evaluate the Uighurs' every move was developed in part by China Electronics Technology Group Corporation (CETC), a state-run firm.

That firm has dealings with Siemens, a spokesperson for Europe's largest manufacturing company told DW in a statement: Siemens advises CETC on the "intelligent manufacturing solutions" it uses in its production facilities.

Siemens offers the same optimization solutions and standard products to an array of clients. But the multinational insists that "Siemens does not supply any products that are used in our customer's end product," referring to CETC's surveillance systems.

"For the moment, we are following the situation very closely," the spokesperson added when asked about whether Siemens would now reevaluate its business ties to CETC.

The chief spokesman for Chancellor Angela Merkel, Steffen Seibert, told reporters on Monday that "in a situation in which there are no sanctions in place ... it is solely a decision of any given company" whether it wants to continue operating in the region.

Siemens is not the only German firm with intricate business dealings in China. Some 5,200 German companies accounting for 1 million employees are currently active in China, according to the Federation of German Industries (BDI). Trade between the two countries reached almost €200 billion ($220 billion) last year, making China Germany's most important trading partner, according to government figures.

Germany derives its "current prosperity" from China and has previously trodden lightly in distancing itself from Chinese firms, according to the European Council on Foreign Relations. This has led to strife with international partners like the United States, who label Germany naive for leaving open the possibility of Chinese tech firm Huawei building its new high-speed mobile networks.

"Berlin is trying hard to safeguard and build on the partnership that has developed over the last decades, especially economically, which has been very beneficial for both sides," Bernhard Bartsch, senior China expert with Germany's Bertelsmann Foundation, told DW.

But "Berlin needs to wake up" to the challenges posed by its close dealings with China and "do what it can to reduce dependencies," he added.

In a press conference Monday morning, the German government condemned the internment of Uighurs but insisted on talks with China to gain access to the camps and evaluate for itself the veracity of the information contained in the documents. Germany in the past has supported NGOs who rang the alarm on this issue, Delius from the Society for Threatened Peoples told DW.

"Economic interests must never cover up human rights," he said.

DW's Ralf Bosen and Christoph Strack contributed to this report.