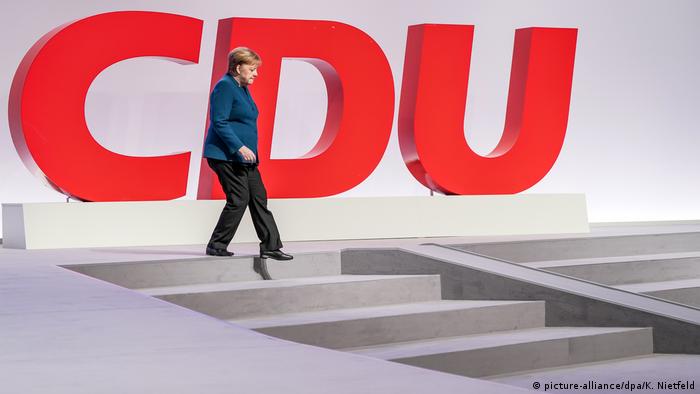 The move is in direct defiance of longtime Chancellor Angela Merkel, who advocated for an open market bid for the massive infrastructure project that included the controversial Chinese firm.

Huawei  has already been blacklisted by the United States and other democracies for its suspected ties to the Chinese government.

But high-ranking members within her own party, including former minister Norbert Röttgen and the party's general secretary, Paul Ziemiak, categorically opposed the involvement of Huawei or any other companies tied to foreign-state interests.

"No Chinese company is an independent company," Röttgen said, adding that Huawei's involvement is principally "an imminent question of national security."

Annette Dietl-Faude of the CDU's Rhein-Neckar delegation, who voted for the amended resolution, said that while it was important that markets remain open to firms willing to compete for the future of German digitalization, Huawei's involvement is "also a question of the responsibility of policymakers and the state."

"Do we want to place that in the hands of a company from a country where completely different laws apply?" she told DW. "I'm critical of allowing that to be decided by a single ministry and not by the Bundestag," she added.

Germany's other parties rule out Huawei

Just days before CDU delegates met in Leipzig this weekend, nine security and foreign-policy experts with the CDU's coalition partners in Berlin, the center-left Social Democrats (SPD), openly called in a policy paper for Germany to exclude "non-trustworthy manufacturers, especially if unconstitutionally controlled interference, manipulation or espionage cannot be ruled out."

Meanwhile, the environmentalist Greens, currently nipping at the heels of Chancellor Merkel's CDU in polls, also categorically rule out Huawei's involvement in Germany's 5G network. That raises the possibility that opposition parties and unruly coalition partners could stop Huawei from bidding on the project, even with Germany's most powerful politician open to the prospect.

Germany's digital infrastructure lags behind most European counterparts, making the 5G project a crucial cornerstone of the CDU's plans in a post-Merkel era to bolster the nation's market competitiveness.

In the end, a last-minute compromise backed by CDU leader Annegret Kramp-Karrenbauer was reached, which took the decision out of the hands of Germany's executive branch.

The motion passed with only a few dissenters. It was not immediately clear how the chancellor, a delegate herself, voted on the matter.

"We will define the security standard, and we will check whether it will be adhered to," Kramp-Karrenbauer told German broadcaster RTL on Thursday after the compromise motion was added to the docket. "I think that's a good, stable foundation for the different viewpoints on this issue."

The People's Republic of China has launched Huawei 5G networks, but the telecoms giant cannot shake off the view it is too close to the Chinese government, argues DW's Clifford Coonan. (01.11.2019)