The CDU is poised to rebel against Chancellor Angela Merkel over her Huawei policy. Conference delegates want to force her to let the Bundestag vote on whether to allow the Chinese tech giant to build a 5G network. 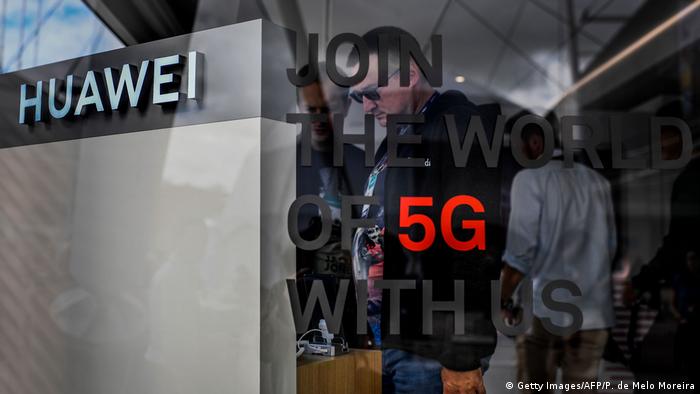 Leading figures in Angela Merkel's Christian Democratic Union (CDU) have defied the German chancellor by throwing their support behind a motion to make sure parliament has a say in the government's policy on Huawei.

Several German government departments are currently locked in a debate about the extent to which the Chinese telecom giant should be allowed to install a 5G network in Germany.

Some CDU MPs had originally filed a conference motion calling on Huawei to be excluded from building the new 5G network, and though an amendment has now removed this demand, the motion still contains the insistence that the government "quickly" present a bill to parliament on the matter.

According to a report in the Bild newspaper, the amended motion, to be voted on at the party conference in Leipzig this weekend, has the support of several CDU Bundestag members, including senior figures such as former minister Norbert Röttgen and the party's General Secretary Paul Ziemiak.

Citing unnamed party sources, the newspaper said that Merkel's successor as party leader, Defense Minister Annegret Kramp-Karrenbauer, backed the motion as well. On Thursday, Kramp-Karrenbauer told broadcaster RTL that the new motion represented a good compromise. "We will define the security standard, and we will check whether it will be adhered to," she said. "I think that's a good, stable foundation for the different viewpoints on this issue."

One delegate at the CDU conference in Leipzig denied that the party was defying the chancellor. "We will support the chancellor in her course, though of course there are differing opinions and wings in the party," Jennifer Gross, from the CDU's Rhineland-Palatinate delegation told DW's Kate Brady. "I'll be interested to see the results today."

Röttgen also insisted to Bild that "the amendment is marginal." But nevertheless, the inclusion of the Bundestag in the decision-making process is likely to annoy the chancellor. It will also complicate the already labyrinthine government procedures and technical details that are being negotiated over how the 5G rollout is being handled.

No final decision has yet been made on whether to allow Huawei to install the network, but there are persistent fears that the company will include "backdoors" to Germany's communication infrastructure that could be accessed by the Chinese state.

Read more: Huawei and 5G: It's a minefield

Merkel's line on 5G infrastructure, which is considered vital for the country to remain economically competitive, is that no bidders should be excluded as long as they fulfill a specific catalog of security criteria drawn up by Germany's two internet authorities: the Federal Office for Information Security (BSI) and the Federal Network Agency (BNetzA).

But speaking to the Tagesspiegel newspaper earlier this week, Röttgen argued "we must not allow any Chinese state influence on the 5G net" and suggested that instead, Germany should seize the opportunity to support European technological innovation.

Röttgen, who chairs the Bundestag's foreign affairs committee, added that he understood the interest in maintaining good trade relations with China, but said national security was a greater priority.

However, Vodafone Germany, one of the country's biggest internet and phone service providers, said that Huawei technology was already vital to Europe's 5G infrastructure and heavily in use.

"The entire European telecommunications industry would have difficulties if Huawei network devices were no longer allowed," the firm told DW in a statement. "A ban on Huawei products in Germany would mean the 5G installation would be significantly more expensive and would be delayed — especially in rural regions." CDU delegate Gross also acknowledged that completely excluding Huawei would still be possible at this stage.

Vodafone already uses 2G, 3G and 4G Huawei antennae in Germany, and the company says that about half of the 5G antennae it installed in 60 "pioneer locations" this summer were also made by the Chinese company.

In its statement, the company said it has been installing Huawei products in Germany for more than ten years.

"The continual security checks by Vodafone Germany, that we also apply to Huawei network elements, and further security tests that are permanently carried out in Britain, have not found any security concerns or evidence of abuse of the network by Huawei," the statement added.

The People's Republic of China has launched Huawei 5G networks, but the telecoms giant cannot shake off the view it is too close to the Chinese government, argues DW's Clifford Coonan. (01.11.2019)

Sieren's China: A trade deal with a question mark

The recent trade agreement between China and the US isn't much more than a declaration of intent. Yet it's no surprise that Trump is touting its success, since he's swimming in problems at home, says DW's Frank Sieren. (21.10.2019)