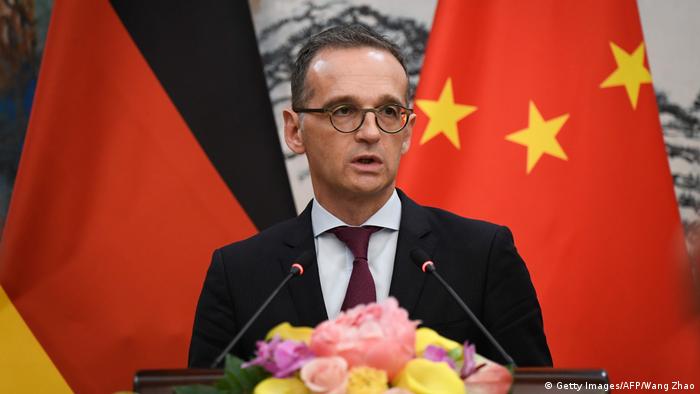 Foreign Minister Heiko Maas on Tuesday called on China to comply with its human rights obligations and urged Beijing to clarify its position on interning Muslim minorities in prison camps.

Rights groups estimate that around a million Uighurs and members of other Muslim minority groups have been detained in so-called reeducation camps in northwest China.

"China must meet its international obligations on human rights," Maas said in Berlin.

The German foreign minister said in an interview with German newspaper Süddeutsche Zeitung: "If indeed hundreds of thousands of Uighurs are being detained in camps, then the international community cannot close their eyes."

Human rights observers have called on Germany, and those of its multinationals connected to companies complicit in the internment, to step up against China, the country's most important trading partner.

Due to the many German business ties with China, Berlin has been under pressure to respond to the detainment of Uighurs.

Maas emphasized the importance of transparency and called for independent access to Xinjiang, such as allowing the UN High Commissioner for Human Rights.

For now, Germany sees no reason to question German investments in Xinjiang.

German carmaker Volkswagen, for instance, defended its presence in Xinjiang province, where it operates a production facility in Urumqi. Speaking with DW on Tuesday, the company said its decision to open the Urumqi facility was "purely economic." VW says it expects "further economic growth in the region over the coming years."

The company addressed working conditions at the Urumqi facility, which is operated by a joint venture with the Chinese company SAIC, noting, "We do not assume any of our employees are forced laborers."

VW, which has been active in China for 35 years, recently came under pressure to justify its presence in Xinjiang after a report by the Süddeutsche Zeitung claimed it was operating Urumqi at a loss in order to secure contracts with the Chinese government for more lucrative sites in eastern China.

Chancellor Angela Merkel's chief spokesman, Steffen Seibert, told reporters on Monday that "in a situation in which there are no sanctions in place ... it is solely a decision of any given company" whether it wants to continue operating in the region.

US Secretary of State Mike Pompeo on Tuesday said the newly released reports show, "The Chinese Communist Party is committing human rights violations and abuses against individuals in mass detention."

Pompeo said the information, "shows that it's not random, that it's intentional and ongoing." He called on China to immediately release all arbitrarily detained individuals in the region.