Thuringia AfD fallout: How weak is Germany′s CDU? | World| Breaking news and perspectives from around the globe | DW | 19.02.2020

Germany's CDU MP: 'We made mistakes'

A leading Christian Democrat has admitted that his party "underestimated all the ramifications" of the political scandal that began this month after a new premier was elected in the state of Thuringia with votes from both the CDU and the far-right Alternative for Germany (AfD).

"I don't want to blame the Thuringian CDU, but they have made also some serious mistakes," Roderich Kiesewetter told host Sarah Kelly.

By voting with the AfD, the conservatives in Thuringia shattered the political taboo in Germany of cooperating with the far-right, defying orders from the CDU leadership in Berlin, which is dead set against any cooperation with the AfD.

This led to the resignation of party leader Annegret Kramp-Karrenbauer, who until then was the most probable successor to Chancellor Angela Merkel. 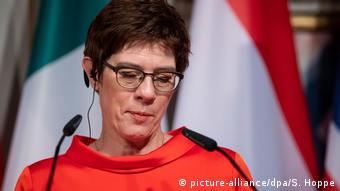 Kiesewetter said Kramp-Karrenbauer had made "some bad choices," without elaborating further, but he denied that she had been a bad pick to replace Merkel.

He praised Kramp-Karrenbauer's work, saying she had achieved "something which is nearly forgotten," namely the reconciliation of the CDU with its Bavarian sister party, the Christian Social Union (CSU). Both parties had been bitterly divided, especially over Merkel's policies on the refugee crisis.

Read more: Why is everyone in Germany talking about Thuringia and the AfD?

'A party with fascist roots'

Kiesewetter was also very critical of the AfD, which has a strong presence in Thuringia and is the main opposition party in the German federal parliament. "The AfD is not behaving like a normal competitor," he told Kelly. "They are behaving like a spoiler."

Kiesewetter added that "the AfD is a party with fascist roots, but we should not blame the voters," before reiterating the CDU mantra that it cannot cooperate with "heads of a party who are very, very right wing."

Instead, he said his CDU should remain in the center of the political spectrum and not veer to the right to regain voters. The CDU has lost support in recent years and is now polling at around 27% nationally. In the last federal election in 2017, Merkel's party took 32.9% of the vote, whereas in 2013 it reached 41.5%.

'Too long, too late' 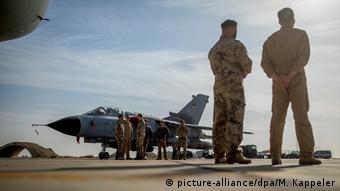 Germany's military has been criticized for being under-equipped and understaffed

This political crisis in Germany has also cast doubt on the country's ability to play a more prominent role internationally.

The US, for instance, has often criticized Germany for not spending enough on defense, and Berlin is still far from fulfilling the pledge by NATO allies to spend 2% of GDP on defense by 2024.

Kiesewetter, who is mostly known in Germany as a foreign affairs and defense specialist, told Kelly that the government has committed to spending 1.5% of GDP by 2025 and is aiming to meet the 2% goal by 2031.

"I know, as a simple member of parliament, that this is too long, too late, but we have also an armed forces which was not able to absorb any further money because of all the changes which are needed," he said.

The German military has been under criticism for being "underequipped, understaffed and overly bureaucratic," as a parliamentary report revealed.

Kiesewetter acknowledged that the "domestic situation" of the armed forces is "really horrible," but he stressed that Germany is "fully achieving all benchmarks" regarding its commitment in the Balkans, Afghanistan, Africa and the Baltic.

He added that a lot has been achieved and the armed forces are on a "very good" path.

'The Americans should calm down'

Another contentious foreign policy issue for Germany is the Nord Stream 2 pipeline, which will run straight through the Baltic Sea and deliver Russian natural gas to Germany.

The US has warned that Germany could become dependent on Russia, and in December a law was passed in Washington approving sanctions on companies and governments working on the pipeline.

"First of all, the Americans should calm down," said Kiesewetter, who added that the US imports "millions of barrels of Russian oil" and should "look at the other side."

The CDU politician added that Germany "really needs" Nord Stream 2 because otherwise the country would not be able to satisfy its own energy demands.

The country's next leader

Kelly pressed Kiesewetter to answer who should lead Germany in future given all these local and international challenges.

Some names have been proposed as possible successors to Kramp-Karrenbauer in the last few days, including Norbert Röttgen, head of the parliamentary foreign affairs committee, Health Minister Jens Spahn, long-standing Merkel critic Friedrich Merz and Armin Laschet, the state premier of North Rhine-Westphalia.

But Kiesewetter refused to say who his preferred candidate would be, simply stating that "it will be a German citizen" and "someone from the CDU."

The announcement follows the resignation of Angela Merkel's previously tipped successor Annegret Kramp-Karrenbauer. The CDU party is scrambling to find a credible contender for next year's election. (19.02.2020)

The far-right AfD is benefiting from the political turmoil in Thuringia, says Alexander Görlach. And as long as centrist parties including Angela Merkel's CDU point fingers at one another, democracy could be at risk. (19.02.2020)

Friend or foe? Ties between the two sides of the Atlantic are already complicated. At the Munich Security Conference, the differences were more apparent than ever, says Matthias von Hein. (16.02.2020)