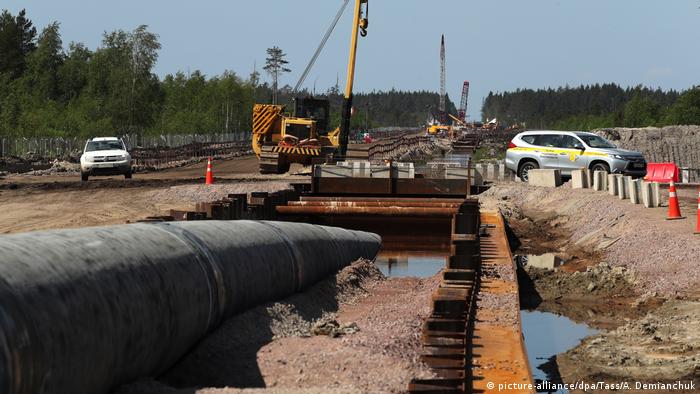 A bit like with Brexit, after many of us have shuffled off this mortal coil, debates over the virtues and vices of Nord Stream 2 may still be grinding on. As the controversial gas pipeline linking Russian supplies and European consumers via Germany reaches the seabed below Danish waters, this princely project faces renewed scrutiny on both sides of the Atlantic. The now delayed pipeline sits alongside the US' Huawei threats towards EU members states and Washington's penchant for trade tariffs as crux issues as the world grapples with a changing international order. How it is resolved will be pivotal to how EU-US and EU-Russia relations evolve in the coming years, perhaps even months.

Many in Central and Eastern Europe have seen the pipeline as an attempt by Russian president, Vladimir Putin, to undermine EU unity and, perhaps more crucially in Warsaw and Kyiv, bypass them as transit countries and nullify the fees that that accrues them. "Despite Trump's eccentric behavior, the US tends to keep trans-Atlantic unity, while Putin's Russia strives to destroy it," Mykhailo Gonchar, editor of Black Sea Security Journal, based in Ukraine, says.

If completed, the €10 billion ($11 billion) pipeline would double Russia's direct export capacity to Germany as a first entry point to the EU to 110 billion cubic meters (bcm) per year. Some 1,230 kilometers (755 miles) in length, it is set to run from Russia's Ust-Luga to Germany's Lubmin near Greifswald. But 160 kilometers of the pipeline remain incomplete, all in the Danish Exclusive Economic Zone (EEZ), and the EU is again looking into the project as the US threatens more sanctions.

Sanctions: Method in the madness

The US Congress is discussing a new bill on penalties if Russia tries to complete the pipeline. Such sanctions would hit European companies now investing in the pipeline, as well as those buying the Russian gas in the future. Swiss-Dutch pipe-laying company Allseas stopped work on the pipeline in December due to fear of being hit by the sanctions.

"If only the current sanctions remain in place, Russia would be able to lay the pipeline using its own vessels, though with significant delay," says Anna Mikulska from the Center for Energy Studies at Rice University.

Putin: Hoisted with his own petard?

Putin has said Russia is capable of completing the project on its own and that it would be finished either by the end of this year or early next year.

But Moscow needs to find a vessel capable of laying the remaining 160 kilometers. The Akademik Chersky and Fortuna pipe-laying vessels are potential options. The first is set to undergo modernization and has reportedly been sent to Singapore for an upgrade. It is expected to arrive on February 22. It is not yet known how much time it will take to upgrade. That leaves the Fortuna, currently in the German port of Mukran in the Baltic Sea, making it the most logical possibility.

The EU does not give special treatment to the pipeline, according to the bloc's Energy Commissioner Kadri Simson. The EU's Gas Directive, which sets out regulations for all third country (i.e. non-EU) suppliers, stipulates that EU gas markets must be open to third country suppliers, have a clear tariff policy and be unbundled (producers from suppliers). The project's owners are hoping the German regulator, BNetzA, will help it clear such hurdles. The Bonn-based organization will publish its position by May 24 at the latest, a spokesman confirmed to DW.

Berlin argues that the conflict between Russia and Ukraine, which was one of the main reservations behind Nord Stream 2, has been settled after a long-term contract for gas transit through Ukraine was signed in 2019.

"Germany has not been very receptive to US (and some of the Central and Eastern European countries') critique of the pipeline as a way for Russia to exert additional geopolitical influence in Europe," according to Mikulska. "But in this context, US sanctions on the pipeline have worked quite well: pushing Russia to sign a gas contract with Ukraine for the next five years of Ukrainian transit," she added.

Germany, she went on, has argued the pipeline is very much a market-driven project and has given little attention to the geopolitical argument. "Of course, Germany has a lot to gain from the pipeline, not the least becoming a major natural gas hub for Europe," she added. "That being said I do not see Germany changing its tune," Mikulska went on. "We have seen a significant decoupling of US and German foreign policy in recent years and I don't think it will change at this point. In addition, we could see even stronger disagreements emerging within the EU, between opponents and proponents of the pipeline, not something that is helpful in the post-Brexit Europe," Mikulska added.

Neither borrower nor lender be

The outcome of the regulator's deliberations will now come down to the legal definition of what constitutes "completion." Nord Stream 2's owners argue that although the pipeline isn't yet fully complete, they had invested €5.8 billion "irrevocably" in it by May 2019. The consortium — financed by Royal Dutch Shell, Uniper and Wintershall in Germany, France's Engie and Austria's OMV — is counting on EU exemptions for projects completed before the May 2019 deadline.

Mateusz Kubiak, senior analyst at Esperis Consulting, a Warsaw-based consultancy firm operating in energy and insurance markets, believes Germany's regulator is in a bind. "It would be very hard to prove that such a decision is in line with the EU directive. And for sure it would be challenged by some of the European countries," he said.

"The BNetzA could — but it is not a given — potentially stipulate some bespoke regime for Nord Stream 2, which would impose certain requirements on the way it is operated but perhaps short of a full-fledged derogation," Oxford Energy Institute researcher Katja Yafimava says. "If it does so it this could be seen as Germany finding a way for Nord Stream 2 to operate, as Germany has always said that the pipeline would proceed if post-2019 Ukraine transit is guaranteed — which is the case," she added.

French President Emmanuel Macron was in Warsaw recently and alluded to a recalibration of the EU's stance towards Moscow, Warsaw's perennial enemy. Warsaw, a key ally of the US in Eastern Europe, has been critical of Russian policy in Ukraine and sees the pipeline as undermining its position also as a transit country for gas. Nord Stream 2 has also put constraints on deep water sea freight to and from the Polish port Swinoujscie-Szczecin, a Warsaw-based energy expert said.

Meanwhile, Polish Prime Minister Mateusz Morawiecki, recently acknowledged that US sanctions will not now stop the pipeline. During a meeting with Putin in Moscow in early February, German Chancellor Angela Merkel said Nord Stream 2 will be implemented "no matter what."

The spat with Poland coincides with EU pressure on Warsaw over the alleged politicization of its judiciary. Some in the Law and Justice (PiS) government have suggested that Berlin has used the pipeline as a bargaining chip.

"I would expect some of the EU countries and especially Germany to defend Nord Stream 2, arguing that the US should not unilaterally interfere into European internal affairs and European businesses," Mateusz Kubiak, an oil and gas expert with Warsaw-based consultancy firm Esperis, said.

"Germany may argue that the European Commission has brokered the Ukraine gas transit deal and now there is no basis to say that the pipeline is politically motivated. We have to remember that the pipeline is not about sending an additional gas to Europe, but is about diverting volumes, which have been supplied through Ukraine. Therefore, and taking into account the high costs of both onshore and offshore sections for Gazprom, it is questionable whether it was really only a financially motivated decision to build the pipeline or it was rather meant mostly to halt Ukraine gas transit," Kubiak said.

But Kirsten Westphal, an energy expert at the German Institute for International and Security Affairs (SWP), told DW the geopolitical arguments have lost ground not only with regard to Ukraine, but also to Poland. "US sanctions display how politically loaded the whole issue is. It is also all the more evident that US sanctions are an extension of US domestic politics, an area of unique bipartisan support. Moreover, geoeconomics are playing out, as US LNG [liquified natural gas] looks at the EU marketplace. Finally, the impact of sanctions is counterproductive and paradoxical. The sanctions in many ways hurt EU firms more than Russian ones. This is visible in the oil sector, which in is is far more important to Moscow coffers than gas exports," she said.

"It is unhealthy for trans-Atlantic relations for Washington to sanction an energy project in Europe, but it seems that Europe and the US every couple decades has a skirmish over new Russian pipelines into Europe, and nevertheless the relations emerge intact," professor Brenda Shaffer, a Russia expert at Georgetown University, told DW.

"I think that the importance of Russia to Germany is really exaggerated," Gonchar said. "It's a consequence of the 'Schröderization' [pro-Russia policies promoted by former German Chancellor Gerhard Schröder] of some groups in the German political establishment that control the oil and gas business of several German energy companies," he went on.

Meanwhile, global LNG supply is expected to increase by around 34 million tons this year, with 24 million tons of this from the US as supply builds up from LNG trains that started up last year and as more capacity is brought online this year.

"The coronavirus is already having a major impact on China's LNG demand," gas market expert Andy Flower said. "There are few other places for the additional LNG production to go, so sellers are likely to look to Europe again. So how will Gazprom respond: Do they go for value or volume?"

Berlin and Brussels have criticized White House sanctions against companies involved in building a Russian natural gas pipeline to Germany. They accused President Trump of interfering in national and bloc sovereignty. (21.12.2019)