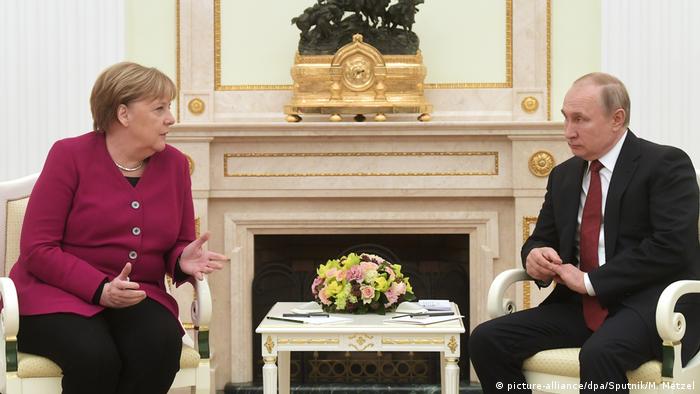 The Nord Stream 2 is set to deliver Russian gas to Germany, which relies heavily on Russian firms for its energy needs. The pipeline has been the target of sanctions by the US government, which says that the pipeline, which belongs to the state oil company Gazprom, could be used as a "tool of coercion" and could turn Germany into a "hostage of Russia."

"I hope that by the end of this year, or in the first quarter of next year, work will be finished and the gas pipeline will start operating," Putin said at a joint press conference with Merkel.

For her part, Merkel said she "does not agree with the US approach" of imposing sanctions, which have already been decried by the German government for impinging on national sovereignty.

She added that  "despite the sanctions it will be possible to complete Nord Stream 2... There is a certain delay but it will be completed."

The pair also talked about the security situation in the Middle East and North Africa, with Merkel saying it was an "important step" for Iran to admit that the crash of a Ukrainian Airlines jet on Wednesday had been an "unintentional human error."

Merkel called for a full-scale investigation, saying "it is good that those who are responsible are known ... everything has to be done now to find solution with those countries where those who are affected came from."

Turning to the ongoing civil war in Libya, which has killed at least 8,700 people since 2014, the chancellor said she hoped Turkish-Russian efforts to broker peace would be successful, and confirmed that Berlin would be the site of upcoming ceasefire talks.

However, Merkel stressed, it would be the United Nations, and not Germany that would lead the talks. She expressed the hope that Libya could soon become a sovereign and peaceful country.

"This kind of conference can only be the prelude for a longer process," the chancellor added.