The French leader praised a 'turning point' with Warsaw after he accused the Polish government of 'lying to the people' in 2018. Macron is hoping to bolster French, German, and Polish ties after Brexit. 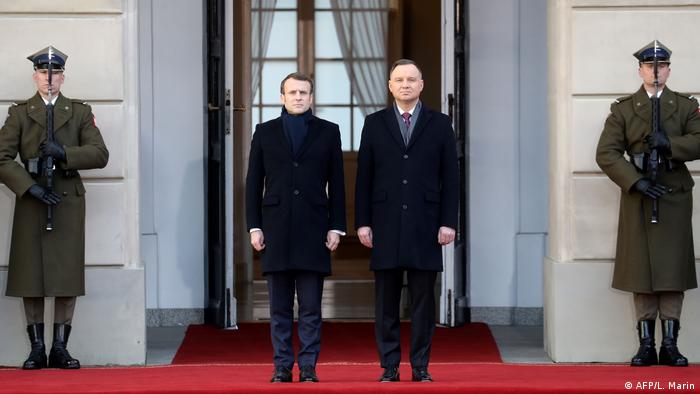 French President Emmanuel Macron was in Warsaw on Monday, where he was working on rebuilding strained ties between France and Poland as the EU reels from the consequences of Brexit. Macron called for a new summit of the "Weimar Triangle," between the two nations and Germany.

Macron said he hoped his visit would  "mark a real turning point in the role that together we can play for the Europe of tomorrow."

Together, he said, he wanted Paris and Warsaw to "make the European project stronger, because indeed today... after Brexit, fragility and doubt have set in."

There have been tensions between Poland and western European over a series of controversial reforms implemented by the ruling Law and Justice (PiS) party, including an overhaul to the judicial system that saw at least 20 judges forced out of Poland's top court. The European Court of Justice ruled against this reform, and plans to introduce new media restrictions have garnered similar criticism.

In 2018, Macron himself accused PiS of "lying to their people" about supposed EU "interference" in their domestic affairs.

More recently, Poland rejected a plan to make the EU carbon neutral by 2050.

Macron spoke of the need to "meet the climate challenge and support Poland, which faces a challenge that I do not underestimate," in its battle to wean itself off coal.

Polish President Andrzej Duda welcomed a new "breakthrough" in his country's relationship with France, hailing their "strategic partnership." Macron said that they had spoken with "honesty" about his concerns over Poland's judicial reforms.

The French leader also used the opportunity to announce a summit between his country, Poland and Germany as part of the "Weimar Triangle" framework that has been largely left to the wayside in recent years.

He said that these three nations "bear responsibility for Europe's future'' and should resume that role, particularly in light of the UK's departure from the bloc.

Emmanuel Macron's plans to make France's labor market more competitive have been decried by critics as the "mother of all reforms." DW looks at how the president plans to overhaul the country's stringent labor laws. (31.08.2017)

The lower house, the Sejm, has approved a bill that analysts fear could be used to stifle judges critical of government legal reforms. The new legislation has been heavily criticized by the European Union, among others. (23.01.2020)