Russia can complete Nord Stream 2 pipeline by itself: Kremlin 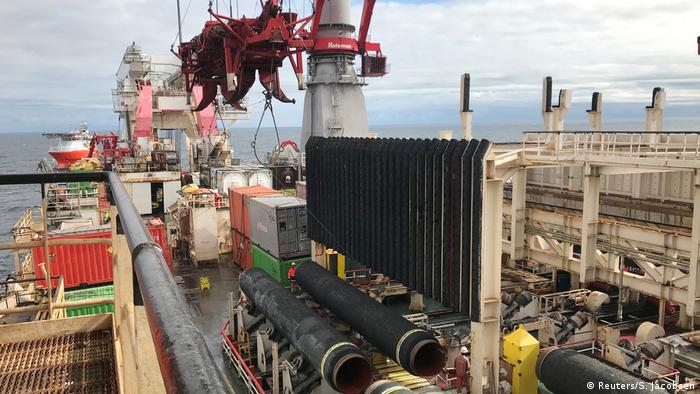 Russia will likely complete the controversial Nord Stream 2 gas pipeline by itself after Swiss contractor Allseas pulled out of the project citing US sanctions.

Russian Energy Minister Alexander Novak said on Thursday that the work could be completed by Nord Stream 2 AG, the Swiss-based subsidiary of Russian energy giant Gazprom that is responsible for planning and operating the pipeline.

"We have an opportunity to complete the work with our own funds," Novak was cited by Russia's TASS news agency as saying. "This will require some additional organizational work, and I think it will be done within a few months."

The Russian minister added he was certain Nord Stream 2 would be completed and operational in 2020, despite sanctions imposed last week by the Trump administration.

In earlier comments, Novak did not rule out that Allseas could return to work on the gas pipeline in the future.

Moscow 'has a pipe-laying ship'

Meanwhile, Russian newspaper Kommersant reported on Thursday that Moscow has a "pipe-laying vessel" to finish the project.

President Vladimir Putin told a gathering of top Russian businessmen about the vessel late on Wednesday, the paper said, citing some sources who attended the event.

Putin said the completion of the project would be "stretched" by several months due to the sanctions, Kommersant added.

Gazprom bought a special pipe-laying vessel called Academic Cherskiy in 2016 to be used as a last resort if European companies stopped working on Nord Stream 2.

According to Refinitiv Eikon data, Cherskiy is currently based in the Russian Pacific port of Nakhodka.

Europe 'too dependent' on Russia

US President Donald Trump signed off on sanctions last week on Nord Stream 2, warning that the project would make the EU too dependent on Russian gas.

The pipeline is designed to bypass Ukraine and increase gas supplies via the Baltic Sea to Germany, Russia's biggest energy customer.

Trump has warned that Berlin could become a "hostage of Russia," if Moscow ever threatened to cut off the gas supply, as has happened during price spats with Ukraine over the past decade.

Germany is dependent on imports for 98% of its oil and 92% of its gas supply.

The twin pipes covering a distance of 1,225 kilometers (760 miles), with a combined length of 2,460 km, were due to cost $11 billion to complete, although Germany has warned that extra funds will now be needed. Reports suggest 94% of the pipelines have already been laid, with just 160 kilometers of the construction left.

Russia has slammed US sanctions over the mammoth gas pipeline to Germany as illegal and an example of "unfair competition." The measures, which still need Donald Trump's approval, target firms involved in the project. (18.12.2019)