Why is everyone in Germany talking about Thuringia and AfD? | Germany | News and in-depth reporting from Berlin and beyond | DW | 06.02.2020

The brief election of a new state premier in Thuringia, with votes from the far-right AfD tipping the balance in his favor, prompted outrage in Germany. Here's how it came to pass, and why it's ruffling so many feathers. 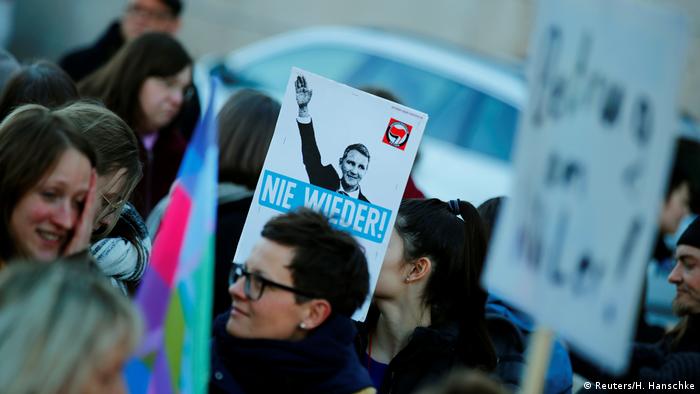 Right-wing populist involvement in the highest levels of government is becoming fairly commonplace in Europe, but Germany's political "cordon sanitaire" around the populist Alternative for Germany (AfD) had seemed far more robust than most, and with good historical reasons. At least, that was the case until Wednesday in the eastern state of Thuringia.

Politicians from the pro-business Free Democrats (FDP), Chancellor Angela Merkel's Christian Democratic Union (CDU) and the far-right AfD combined to elect the FDP's candidate, Thomas Kemmerich, as state premier. He beat Bodo Ramelow, the incumbent candidate from the socialist party Die Linke — the most popular in the state at last year's elections — by a single vote.

The result came as a particular shock because the AfD had fielded an independent candidate of their own for the post, but all delegates then voted for Kemmerich in the third round of votes. It's not clear to what extent, if any, the three parties collaborated ahead of the vote.

In the wake of the political outcry, Kemmerich indicated he would resign and call new elections, his position becoming increasingly untenable after Angela Merkel called for the result to be reversed. The chancellor's intervention, while on a trip to Africa, may have indicated disciplinary problems within the CDU since Annegret Kramp-Karrenbauer took over the role of party leader from Merkel, who is serving her last term as chancellor.

Read more: Things you need to know about the AfD 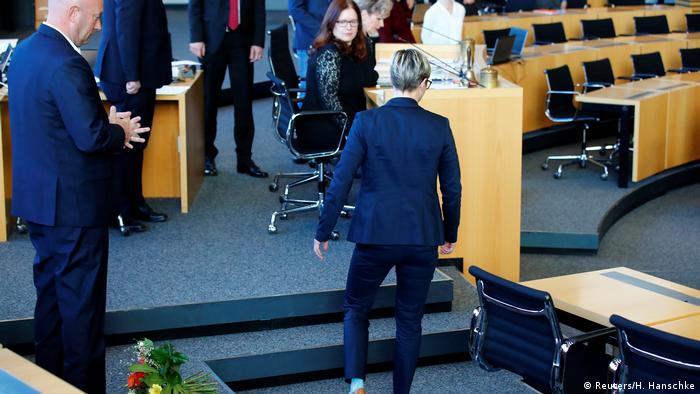 Left Party politician Susanne Hennig-Wellsow dropped a bouquet of flowers at Kemmerich's feet after the vote, saying those voted in by Nazis did not deserve any

It's the first time since World War Two that a German politician has been elected to the highest role in state politics, akin to that of a governor in the US, on the back of support from a far-right party. And it took place in the very same state where the first Nazi politicians assumed  government roles in the 1930s, shortly before Adolf Hitler became German chancellor.

Thuringia's political landscape is extremely complex. Elections last October provided no obvious coalition. Die Linke, the party that can trace its roots back to communist East Germany, remained the state's most popular party. But their obvious potential allies, the SPD and the Greens, did not win enough support to form a left-of-center coalition with a majority. The plan was to run a three-way minority coalition with Ramelow as state premier.

The AfD, which all Germany's other parties refuse to work with, came in second overall, followed by the CDU. The FDP only just cleared the 5% hurdle required to enter the parliament at all.

Despite Die Linke's candidate Ramelow being considered one of the party's most moderate leaders, cooperating with the socialist party is almost as problematic for conservative politicians and voters in the region as working with the AfD.

Ramelow to the left of me, Höcke to the right...

The domestic outrage is particularly intense because the AfD's Thuringia branch is seen as the most extreme in the party. The party leader at the state level, Björn Höcke, often courts fierce criticism even from within the AfD elsewhere in the country. Höcke has founded a group within the party that he calls "the wing," incorporating its more outspoken and radical members. More moderate AfD politicians wrote an open letter last summer decrying the "cult of personality" being formed around Höcke on the party's right flank.

Thuringia's CDU has also been restless for some time, with the party currently banned from talking to either of the two largest parties in the state, having watched its own support dwindle rapidly. Merkel's sharp rebuke on Thursday suggests no change in party policy on cooperating with the AfD at a national level, but there's a real possibility that the party's new leader, Annegret Kramp-Karrenbauer, is struggling to keep local charters in line. While centrist parties allying with populist ones is becoming commonplace in Europe — most recently in Austria — it's exceedingly contentious in Germany because of its Nazi past.

Kemmerich's campaign coming back to bite him

Wednesday's shock has also put the FDP and Kemmerich in a real bind. The pro-business party positions itself as a viable right-of-center option for voters without the more extreme elements of the AfD's politics.

Kemmerich, in particular, had played on this image during the campaign. One of his posters and slogans showed him standing with his back to the camera, the focus on his shaved head. It was captioned: "Finally, a bald head that paid attention in history classes."

One very likely scenario would appear to be snap elections, with Kemmerich having stepped down. The small state of 2.2 million people would likely remain a stronghold of both the Left party and the AfD, though, potentially leading to a similar deadlock.

As for the implications elsewhere in Germany, the AfD could theoretically employ this unusual tactic of supporting the mainstream candidate they prefer in any of the country's 16 state parliaments — they're represented in all of them. At the national level, the AfD is Germany's third largest party and the leading opposition party.

Voters delivered big gains to the far-left and far-right in Sunday's elections in the eastern German state. DW examines why the unprecedented results matter for the stability of the country — and Europe. (28.10.2019)