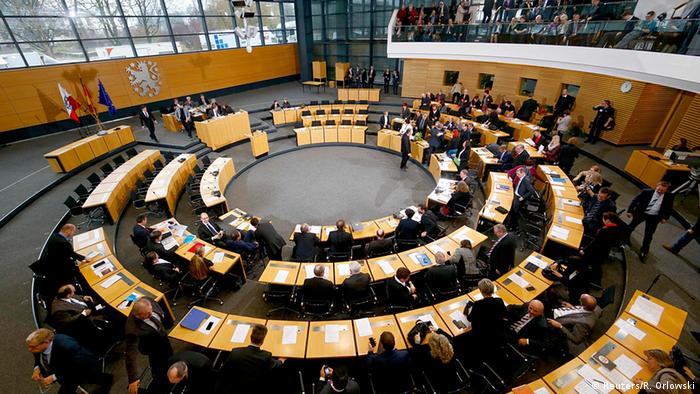 The Thuringian state parliament — the site of a memorable event

Exactly one week ago, on January 29, 2020, Germany's parliament, the Bundestag, ceremoniously commemorated the victims of the Holocaust. The ceremony marked the 75th anniversary of the liberation of the Nazi death camp Auschwitz-Birkenau.

Addressing the body, Israeli President Reuven Rivlin implored Germans to never forget the past, urging them to stand firm against anti-Semitism, racism and xenophobia. Rivlin said Germans and their political parties had a special responsibility to those who cherish freedom and democratic values, as well as a unique responsibility to act in a historically responsible manner. "Germany must not fail," he said.

And now, exactly one week later, this: A member of the business-friendly Free Democratic Party (FDP) has been elected premier of the eastern German state of Thuringia with help from the far-right nationalist Alternative for Germany (AfD) party.

It was a vote that shocked Germany. One that provides ample proof that state politicians from Chancellor Angela Merkel's Christian Democratic Union (CDU) and the FDP — all of whom supported the vote — clearly do not understand their historic responsibility. It was a vote that now presents the country's democratic parties with a crucial test, one that could ultimately lead to new federal elections.

The coming weeks will show whether the oft-repeated promises made by prominent German politicians to never form a coalition with the AfD have any meaning, or whether a lust for power is stronger than their professed convictions.

Though CDU chairwoman Annegret Kramp-Karrenbauer has specifically forbidden members of Thuringia's state CDU to join a coalition with AfD, they may well do just that. So what does her clear lack of control mean?

What will Chancellor Merkel do if state party members really do join forces with AfD and its state leader Björn Höcke? The man has called Germans crazy for erecting "a monument of shame" for murdered Jews in the capital, among numerous other scandals. And what will the Social Democratic Party (SPD) do? Will it withdraw from Germany's ruling coalition, of which it is a partner, forcing new elections?

This notable day should be one that shakes Germans to the core. Now, democratic parties must show how firmly they stand. And what they are willing to risk in an effort to make sure that today's shameful vote remains an anomaly.

This February day has shown just how much of their history Germans have forgotten, and just how much President Rivlin's warning that "Germany must not fail" has to do with all of us. It also reminds us that no one in Germany should kid themselves into thinking history cannot repeat itself.

There were protests in Germany after a conservative state premier was elected with help from the far-right Alternative for Germany. However, the newly-elected leader dismissed the idea of a coalition with the party. (05.02.2020)