The stage is set for the G7 summit in Elmau

As the "who's who" of world politics prepares to descend on the tranquil Elmau valley for the G7 summit, there's also lots of luxury on offer in the form of spas and gourmet menus. And not everyone's happy about it. 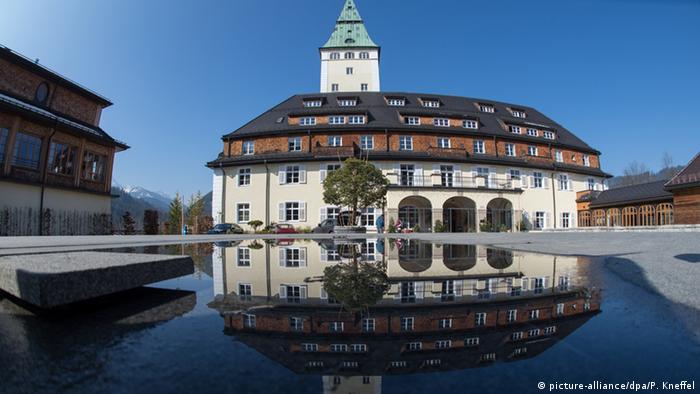 During the G7 summit, the world's eyes will be on Bavaria, or more precisely, on Elmau, a small valley in Upper Bavaria - and the Schloss Elmau hotel - which will host the leaders of the top industrial nations and their delegations for 48 hours. Nestled at the foot of the Wetterstein Mountains, Schloss Elmau is one of Germany's leading five-star resorts.

The private road leading to the hotel is seven kilometers long, curving its way through thick forests and fields blooming with flowers. Apart from the distant bleating of goats and the sound of their bells, it's absolutely quiet. The small stones on the paths make a slight grinding noise beneath my hiking boots. The path leads me past rustic barns and charming alpine huts.

Quaint backdrop for the family photo

An approaching hiker gives me a brief nod and says "Grüß Gott," and then he's gone. All I hear is the sound of his walking sticks clicking as they strike the ground.

This alpine backdrop is supposed to feature in the traditional family photo taken at each summit. It would be a beautiful shot: Angela Merkel, Barack Obama and co. in front of a quaint hut, the stunning mountain peaks rising up behind them. But that's likely not going to happen. The Elmauer Alm restaurant selected for the photo has an extension with big windows allowing visitors to take in the view. The extension, however, is illegal. And photographing the G7 leaders in front of a building that doesn't have the right permits is a no-go. 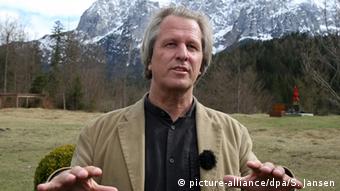 Dietmar Müller-Elmau, the owner of the castle to which the Elmauer Alm belongs, is to blame. He built the extension without getting a building permit from local officials in Garmisch-Partenkirchen. Years went by without anyone noticing. Only when the photo shoot became an issue was he told that the extension has to go.

In front of the cameras, Müller-Elmau likes to show off the seven identical suites with breathtaking views of the landscape. Journalists have been on waiting lists for months for a chance to get an interview. He leads them proudly through the castle's halls. The hotel is a meeting place for intellectuals, business people, and politicians who want to experience the "spirit of Elmau." It also offers guests an extensive cultural program, including classical and jazz music, readings, and yoga. The restaurants cater to gourmet tastes.

At Elmau, anything is possible

The owner doesn't seem to be too bothered with permits. And some of the usual environmental protection measures will be lifted during the summit. A concrete helicopter landing pad built for the summit has to be dismantled once the event is over. The area normally serves as an unpaved parking lot for hikers. But since the paved lot is there now, Müller-Elmau erected a gigantic tent (50 x 25 meters) for one particularly solvent regular guest. The tent was also not approved by the local council in Garmisch-Partenkirchen.

Müller-Elmau knows how to put himself and his castle in the right setting. Even the containers erected near the castle to serve as a press center have been decked out in alpine style. The summit appears to be the perfect marketing campaign for the hotel owner.

G7 is a major event for the region 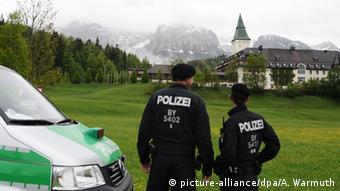 There will be a massive police presence at the summit

"If you project this image of a luxury hotel to the world, then five-star guests will come," said local Green party politician Jörg Jovy. The only problem is, other than Elmau, barely any of the hotels in the region offer the same premium standard. The area tends to attract day tourists or people interested in the former King Ludwig of Bavaria. The famous castles of Linderhof and the Schachen are nearby. But, says Jovy, the Werdenfelser Land is not a successful tourist region, despite its enormous potential.

That's something Claudia Gans knows only too well. Her B&B in Klais, a small town at the entrance to the Elmau valley, is seldom fully booked. When the weather is nice, day visitors and people on a short getaway from Munich relax on the terrace of her café. But today, no one is here, despite the blue skies. "Tourism has changed in recent years," she said. Guests of Schloss Elmau pass on through, as do guests of Das Kranzback, another five-star hotel located just three kilometers away from Schloss Elmau.

"The kind of guests that stay here don't bother with the nearby towns, not even for coffee," she said. Garmisch is currently in the transition period between winter and summer tourism. But Jovy said the region is lacking the proper strategy it needs to be truly successful.

Growth for a forgotten tourist region?

The Garmisch-Partenkirchen region is hoping to score points with its pristine alpine setting. Mayor Sigrid Meierhofer is confident. From her office window, she has a view of the local Wank Mountain. For her and her community, the G7 summit is a blessing, and not just because it was grounds to renovate city hall. She closes the window to shut out the noise of the construction site and the passing cars, and smiles with satisfaction.

For weeks now, most of the beds in her community of roughly 26,000 have been booked by summit participants, police, and journalists. Her advice to her fellow citizens during the extraordinary days before and during the summit: "Don't panic. Live the way you always do, continue to be calm and hospitable." Meierhofer hopes "that we will become even more interesting as a tourist destination."

But Jörg Jovy of the Greens sees things differently. "The Garmisch-Partenkirchen region is a bad place for the summit. It doesn't have the right infrastructure. The whole district is bursting at the seams," he said.

But what really worries him is a photo on the homepage of the state of Bavaria's Interior Ministry. "The picture shows the Elmau valley, full of police vans. I'm not sure if that's the kind of picture we should be showing to the world - that we can barely move with such a heavy police presence."

No return to a G8 with Russia - ever

Even if Russia changes its behavior in Ukraine, there should be no reverting to the G8, argues Thorsten Benner. Instead, G7 countries should invest in improving coordination on global issues among liberal democracies. (02.06.2015)

To mark the G7 summit, the façade of Neuschwanstein Castle in Bavaria is decorated with the flags of the seven participating nations. (01.06.2015)

Germany has reintroduced border controls in the run-up to the G7 summit in Elmau, Bavaria. To avoid a repeat of violent protests by anti-G7 demonstrators at the last meeting, German police have sealed off the venue. (26.05.2015)