China's leader Xi Jinping ends 2017 in an unassailable position of power, having consolidated his grip over the Communist Party and state. Xi's ultimate goal is to transform China into a global superpower. 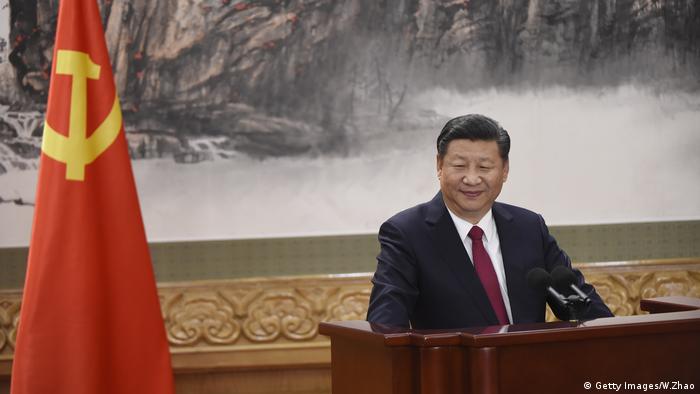 China's President and Communist Party General Secretary Xi Jinping has managed to tighten his hold over the party and state this year. This was in full display during the 19th congress of the Communist Party of China (CPC) held in October, when the 64-year-old president won a second five-year term as leader.

Some believe Xi might seek a third term as general secretary (or as party chairman) in 2022, which would allow him to remain at the helm until 2027. So far, no CPC general secretary has held that post for more than two terms, even if the party charter does not impose term limits.

Adding fuel to the speculation is the fact that no potential successor to Xi was named in the new Politburo Standing Committee.

While Xi had already positioned himself as the "core" leader of the CPC, the party congress also enshrined the president's political philosophy – dubbed "Xi Jinping Thought on Socialism with Chinese Characteristics for a New Era" – in the country's constitution.

The move was, in fact, not unusual, experts say. "As always, the party congress has adopted changes to the constitution to incorporate the ideological inclinations of the incumbent leader and praise them as a great development of Marxism," China analyst Felix Wemheuer told DW.

The inclusion of Xi's name into the constitution accorded him a higher status than his two immediate predecessors, Hu Jintao and Jiang Zemin.

"But Xi's ideas have not been put on the same level as Mao Zedong's ideas," said Wemheuer.

Mao's thoughts are viewed as something that are valid for all times, while Xi's are regarded as relevant only to the current era of the CPC, observers say.

For Xi, having a strong CPC is indispensable for a "reinvigorated China," which features constantly in the president's speeches. The massive anti-corruption campaign undertaken under Xi's leadership is also aimed at achieving this objective.

According to official numbers published in the South China Morning Post, since 2012, China's anti-graft body, the Central Commission for Discipline Inspection (CCDI), has ousted over 250 senior officials from the CPC and the military. Up to two million lower-level officials have also been investigated.

But critics say that corruption is so ingrained in Chinese political culture that Xi's claims of a widespread reduction in corruption have been superficial. And whether or not the crackdown has led to an actual reduction in graft is difficult to observe, even though Xi's detractors say the campaign helped him purge his political opponents.

2017 marks the fifth year since the anti-graft drive began.

In 2018, the anti-corruption drive is set to be taken to a new level. A new "National Supervision Commission" will work alongside the CPC's anti-graft body, the Central Commission for Discipline Inspection (CCDI), sharing much of its power and resources, and will merge multiple additional anti-graft units.

It will also expand the purview of Xi's anti-graft campaign to include employees at state-backed institutions who are not necessarily party members. Suspects could then be detained for several months without legal assistance.

In his congress address, Xi also said China would keep up with the "irreversible" momentum of the anti-corruption campaign, and announced a central leading group responsible for overseeing China's law-based governance.

Observers view these developments as evidence that Xi doesn't intend to separate party from state.

China as a 'global player'

Xi also wants to dedicate his power and energy to turning China into a global superpower and the world's preeminent nation. This vision, which Xi calls the "Chinese dream," includes Beijing's claim to global leadership.

Xi underlined this during his address at the World Economic Forum in Davos, where he presented himself as a champion of free trade and global cooperation.

This was in sharp contrast to the "America First" protectionist rhetoric adopted by US President Donald Trump, who appears to want to withdraw the US from all multilateral trading arrangements.

In May, Xi organized a pompous ceremony in Beijing - attended by representatives from around 100 countries, including 29 heads of state and government - to give international impetus to his signature "Belt and Road Initiative" – an ambitious and coordinated infrastructure project planned from Beijing, which will connect China on land and sea with Europe, Africa, the Middle East and South, Central and Southeast Asia.

The year 2017 has also seen Beijing expand its political and economic clout in other parts of the world. The development of artificial islands in the controversial Spratly Islands in the South China Sea and their conversion into military bases was completed on schedule.

China also opened its first overseas naval base in Djibouti, in the Horn of Africa, despite Beijing officially calling it only a "logistics center."

Although it is primarily intended to support ongoing peace and anti-piracy operations in China, this move is "an indicator of the global expansion of China and its economic interests," said Bernt Berger, a China expert and founder of Engagement Policy Center, a Berlin-based think tank."The US is slowly getting used to the fact that China's civilian and military facilities will be set up even more frequently near US facilities in the future."

It remains uncertain whether this development will lead to more cooperation between China and the US or more rivalry, and possibly confrontation.

During his state visit to Beijing in November, Trump appeared to admire Xi and praised him as a strong national leader. But in mid-December, Trump labelled China - together with Russia – as a "revisionist state" that is determined to "challenge American power, influence, and interests, attempting to erode American security and prosperity."

The Communist Party leadership, meanwhile, is not in favor of a direct confrontation with the US. Instead, China accepts the existing world order for now and intends to emerge as a global superpower in the long run.

This desire, said China expert Wemheuer, was reflected in Xi's speech to the party congress, where he underlined Beijing's aim to turn the country into a global superpower and a modern socialist industrial state by 2049, the centenary of the founding of the People's Republic of China.

Likewise, the People's Liberation Army is to be transformed into a modern fighting force capable of winning wars by 2035.

Despite geopolitical rivalry, the US and China have been forced to cooperate on the North Korean nuclear issue to prevent a catastrophic escalation.

And both countries have reached their limits with North Korea: Even with all his power, Xi Jinping - like Donald Trump and his predecessors - has not been able to stop Kim Jong Un from pursuing nuclear weapons and advanced missiles.

The anti-corruption campaign in China shows no signs of fatigue. Reports about officials ensnared in graft investigations are being released on a daily basis. But the problem won't vanish without reforms, experts say. (27.01.2015)