In a speech to the World Economic Forum, President Xi Jinping defended globalization and called on all people to share in its benefits. He warned against calls for greater protectionism in Europe and the US. 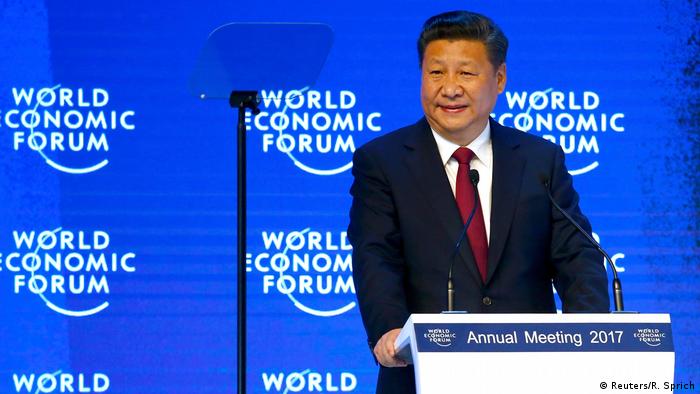 President Xi opened his speech to political leaders, CEOs and bankers by admitting that many people are concerned about what has gone wrong with the world in recent years. But he said it was wrong to blame economic globalization.

Fifty young people - all under the age of 30 - have been invited to this year's World Economic Forum. They want to make an impact and be disruptive. (16.01.2017)

The world's eight richest businessmen own as much wealth as 3.6 billion people - half the world's population - combined, according to an Oxfam report. Inequality is "more shocking than ever before," the aid group says. (16.01.2017)

The Chinese leader told the World Economic Forum in Davos that the "migrant crisis had been caused by war, conflict and regional turbulence," not globalization. Similarly, the 2007/8 financial crisis was caused by "the excessive pursuit of profits and a lack of economic regulations," he said.

Speaking amid a growing populism movement in the West demanding greater protectionism from the worst effects of globalization, Xi said the world should not write off globalization altogether, but instead countries must "cushion its impact."

While acknowledging that a new path for the global economy remained elusive since the financial crisis, Xi warned against calls for increased protectionist trade measures. His message appeared to be aimed at US President-elect Donald Trump, who has vowed to confront China on trade.

"We must say no to protectionism," Xi said, likening it to "locking oneself in a dark room" to protect from danger but also depriving the room of "light and air."

He told countries not to pursue their own interests at the expense of others adding that "no one will emerge as a winner in a trade war."

The Chinese leader called for emerging markets and developing countries to be given a greater voice in global decision making, warning that existing global institutions were currently "inadequate." He also urged all signatories to stick to the Paris climate deal, agreed in December 2015, which Trump has vowed to cancel.

Xi's appearance is the first for a Chinese leader in Davos, and comes amid a great deal of uncertainty as Trump prepares to take office on Friday.

Several issues like trade and climate change have been left hanging in the air by the billionaire's election, where he vowed a change in US foreign policy, and used his campaign to promise to defend American interests.

More than 100 officials and business executives are joining Xi in Davos for this year's forum, which runs until Friday.