Chinese President Xi Jinping is heading into his second term with a massive tailwind, but it will push the country further toward autocracy. The only thing modern about it is the technology, says DW's Matthias von Hein. 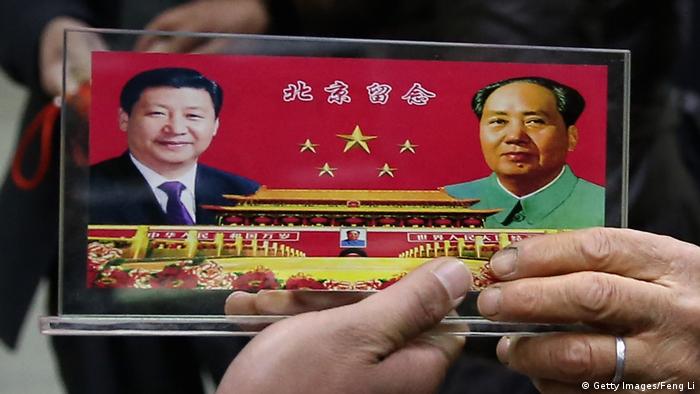 No, Xi Jinping is not the "Great Chairman." Nevertheless, China's head of state and  party leader is referred to as the "chairman of everything." No Communist Party leader since Mao Zedong has managed to consolidate as much power as Xi has in his five years in power. Now the 64-year-old, who comes from an old civil servant's family, has been officially elevated to a status on par with the founder of the People's Republic. The party has ennobled "Xi Jinping Thought on Socialism with Chinese Characteristics for the New Era" by enshrining it in its constitution. No leader since Mao has been extended that honor. And since Xi is a permanent member of the Politburo Standing Committee, he is no longer the first among equals – he is simply the first.

A monumental portrait of the original helmsman still hangs over the entrance to the Forbidden City in the heart of Beijing. Mao's mausoleum, which houses the revolutionary leader's embalmed body, dominates views of Tiananmen Square, where party delegates gathered for the Communist Party's 19th National Congress at the Great Hall of the People. But it is worth remembering: Even officially, Mao's deeds have been deemed 7/10 good and 3/10 bad. One reason for that assessment was the fact that as the autocrat Mao oversaw China's "Great Leap Forward," it resulted, among other things, in the largest man-made famine in history, leaving millions dead. He also plunged China into crisis with his "Cultural Revolution." In order to avoid such excesses in the future, the Communist Party introduced the principle of "Collective Leadership." With Xi Jinping's coronation, the party has indeed distanced itself from that principle.

The Chinese leader is beginning his second term with an unprecedented tailwind – the inclusion of his ideology as "thought" in the party constitution is just one element thereof. Another is personnel turnover, the largest the party committees have seen since 1969: 70 percent of all posts in the Central Committee were new appointments; and five of the seven seats in the all-powerful Politburo Standing Committee had also become vacant. Thus, Xi was free to appoint supporters to those posts in order to enact his program.

Xi, the most powerful man in China in decades, laid out the direction in which he planned to take the largest nation in the world as he opened the Communist Party Congress. Over the course of 203 minutes, Xi declared, in the longest speech ever delivered to such a congress, that the Deng Xiaoping era – which aimed to make China wealthy – had ended. And he announced the beginning of the Xi era – aimed at making China strong: both domestically, through an all-powerful party and an all-powerful leader, and internationally, with the goal of creating a world-class military – on par with the United States – by 2035.

Xi's grand vision extends until the year 2050. His plans for the next five years, however, sound like much of the same. His anti-corruption campaign will continue and, above all, party influence will be extended into every possible aspect of people's daily lives. Xi is putting his money on big data to make that happen. The government wants to use information harvested by Chinese IT companies and force the country's 730 million internet users to participate in a "Social Credit System." That system will evaluate each user's trustworthiness, by awarding "credit points" for good behavior and subtracting points for bad behavior. The government intends to employ artificial intelligence to help it create perfect subjects, too. China's surveillance apparatus is already feverishly engaged in developing a facial recognition system. The goal is to enable state security agents to identify every Chinese citizen filmed by the country's 20 million public surveillance cameras within three seconds.

With a focus on expanding Beijing influence abroad, Xi has urged the world to embrace the "wisdom" of the entire Chinese model. The economically successful, single-party dictator Xi has now ramped up the competition with the West for global influence. With someone like Donald Trump in the White House, the West's weakness might make it easy prey for Xi. Europe must find a compelling answer to the looming conundrum.

Editor's note: This piece was originally published on October 24, 2017.