Five new faces made their appearance on the Politburo Standing Committee as Chinese President Xi Jinping was given a second, five-year term by the new Central Committee. Reform is on the agenda of the new line-up. 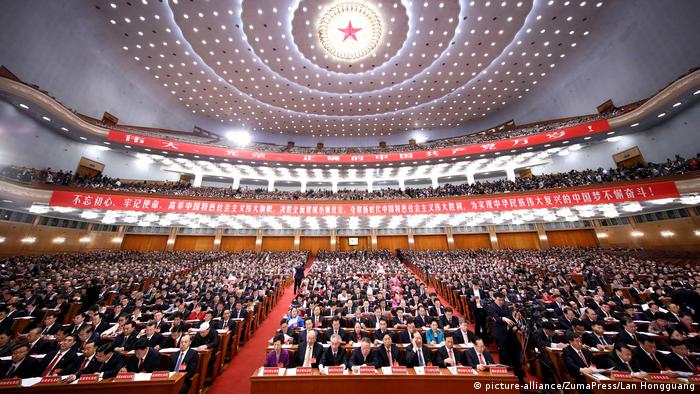 Chinese President Xi Jinping has been given a second, five-year term as leader of the ruling Communist Party.

Xi saw his star rise after his name was included in the Communist Party's charter during the party congress this week. 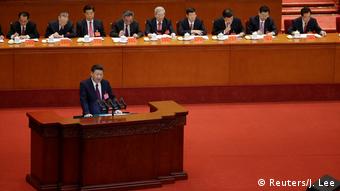 President Xi Jinping did not promote a clear successor

In selecting his supporters in the new seven-member Politburo Standing Committee, Xi appears to have followed the order of seniority to keep the 89-million member Communist Party stable and in agreement at its highest level. The new members appeared in public for the first time on Wednesday after their formal election by 204 party officials on the Central Committee.

However, the 64-year-old leader has not followed previous presidents in naming a successor and promoting that individual to the Politburo Standing Committee. In more than three hours of his speech to open the congress, Xi laid out an ambitious plan for the next 30 years, saying China would become "a great modern socialist country" by the middle of the century.

Likely successors not in sight

It is usual practice at the 5-yearly congress to look among new names on the party's supreme body for the next leader. But this time, with Xi's star rising ever higher, it may be he retains the position well into the future. Any possible successors, such as Guangdong party chief Hu Chunhua or Chongqing party chief Chen Miner were expected to join the lower-level, 25-member Politburo.

The new Central Committee was announced at the 19th Communist Party Congress on Tuesday. Ten women were named, representing 4.9 percent of the total and similar to the previous Central Committee. There were 16 delegates from ethnic minorities, three of whom are women.

President Xi led the men of the Politburo Standing Committee out to a stage in front of journalists on Wednesday as head of the committee, with Premier Li Keqiang as his second in command.

Party organization chief, and at 60, the youngest of the newcomers, Zhao Leji as the new anti-graft chief, takes over from Xi's trusted ally Wang Qishan, whose name did not appear on the list of the new Central Committee members on Tuesday. Over the past five years, Zhao has been responsible for managing the careers of millions of party officials.

Han Zheng, head of the party in Shanghai, takes over leadership of the top political advisory body, the Chinese People's Political Consultative Conference.

Previously director of the General Office of the Communist Party, the 67-year-old Li Zhanshu received his promotion after a series of speeches in support of Xi.

Seen as an academic, the party's chief theorist Wang Huning has spent the last 15 years as director of the Central Committee's Policy Research Office. He is expected to play a role in providing ideological support for Xi's reform programs and ward off unwanted western ideas.

Deputy premier in charge of agriculture and foreign trade, Wang Yang has moved up to help Li Keqiang run China's cabinet, the State Council. For the last five years he has been in charge of the poverty alleviation campaign which Xi set as a priority. He is also known to foreign investors after dealing with Washington on economic and trade matters.

Thought for a new era

With a political theory and his name safely in the party books as the "Xi Jinping Thought on Socialism with Chinese Characteristics for a New Era" Xi looks set to stay at the top of China's political elite for some time to come.

Chinese officials are praising the ideology that Xi Jinping has unveiled at the Communist Party's annual congress. The president could cement his power if his new adages are incorporated into the party's constitution. (19.10.2017)