President Xi Jinping has overseen a large-scale military parade in a show of force to mark the 90th anniversary of the People's Liberation Army. Xi urged the army to "unswervingly stick to" the Communist Party.

Xi, dressed in military fatigues and speaking from an open-top jeep, told troops that China needed a strong army so that it could defeat "all invading enemies."

"Today we are closer than ever before to the goal of the great rejuvenation of the Chinese nation, and - more than any other time in history - we need to build a strong people's military." 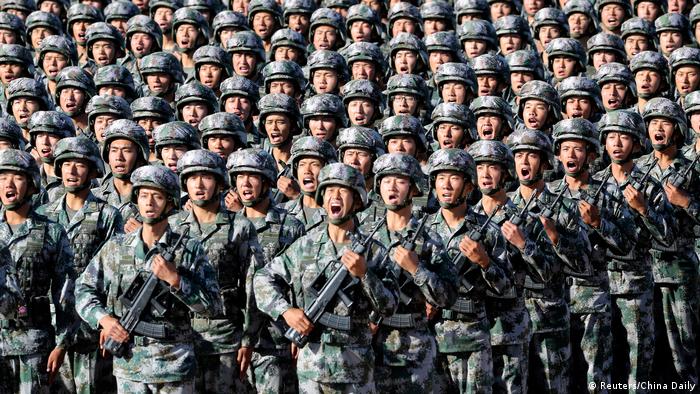 Since coming to power in 2012, Xi has increased control of the ruling Communist Party over the People's Liberation Army (PLA), which has the world's largest standing military.

"The world is not all at peace. Peace must be safeguarded," Xi said. The troops shouted back: "Serve the people!", "Follow the Party!", "Fight to win!" and "Forge exemplary conduct!"

The Chinese president also ordered the PLA to "unswervingly stick to… the Party's absolute leadership," adding the military should "march to wherever the Party is pointing."

Xi's government has ordered the modernization of the PLA in an attempt to make it a leaner force capable of operating far from Chinese territory.

Read: Djibouti military base 'a manifestation of China's global interests'

The PLA, originally called the Chinese Workers' and Peasants' Red Army, was founded in 1927.

Japan is seeking to diversify and expand security partnerships as it faces dual threats posed by an expansionist China and an unpredictable North Korea. Julian Ryall reports from Tokyo. (24.07.2017)