Why North Korea's latest ICBM launch is an opportunity

North Korea's latest and reportedly most powerful intercontinental ballistic missile launch is worrying, especially for the US. At the same time it allows for new diplomacy. Fabian Kretschmer reports from Seoul. 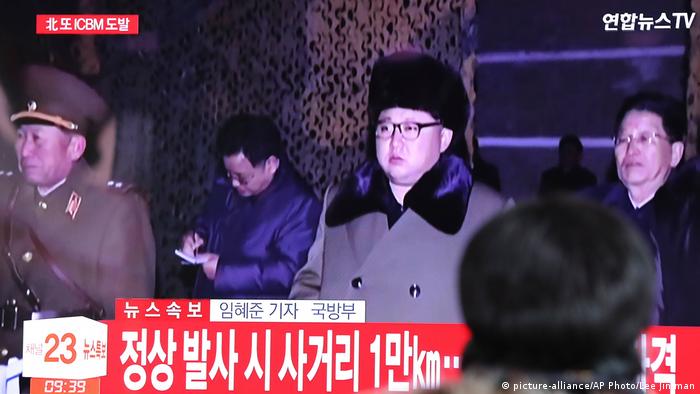 Wednesday's missile launch was a mission accomplished for North Korea. In January, North Korean leader Kim Jong Un said he wanted to complete his country's intercontinental ballistic missile (ICBM) program by the end of year. Ten months later, the dictator appears to have achieved his goal.

The new type of long-range ICBM, called Hwasong-15, rose to an altitude of about 4,500 km (2,800 miles) and flew 960 kilometers (600 miles) for about 50 minutes before landing in Japan's exclusive economic zone. The ICBM range would therefore be sufficient to target any part of the United States.

Reacting to the missile launch, Lindsey Graham, a Republican Party senator, told the CNN news broadcaster that the US was heading for a war with North Korea. When the moderator countered him by saying that the potential US-North Korea war would endanger millions of lives in Northeast Asia, the senator said the US president must choose between the security of the US and regional stability.

But the reactions from South Korea, the North's main rival, are very different. South Korean President Moon Jae In clearly said in a statement that the US government should refrain from thinking about a possible first strike against North Korea. At the same time, Moon advocated even stronger sanctions against Pyongyang.

A few minutes after the latest ICBM launch, the South Korean military also fired three missiles toward the Sea of Japan - a clear sign that North Korea's provocation would not intimidate Seoul.

Amid this tense situation on the Korean Peninsula, progressive North Korea experts emphasize the greater need for a diplomatic solution to the conflict.

"I believe that [after the latest launch] North Korea will remain quiet for some time," Andray Abrahamian, a researcher at Haneda University in Japan, told DW.

Kim Jong Un said Wednesday he had "achieved" his goal with the latest ICBM launch. Security analysts say it is likely that there won't be any missile launches in the near future.

"North Korea could now be ready for negotiations as it operates from a position of strength," said Abrahamian.

In addition to missile launches, the North has upped the "betting rate" for diplomatic negotiations. US President Donald Trump hinted in the past that he was potentially open to the idea of direct talks with the Kim regime.

"We must do something to improve the situation," Hwang Jae Ho, the head of the Institute for International Relations at Hankuk Foreign Language University in Seoul, told DW.

Hwang has big hopes from the 2018 Winter Olympics in Pyeongchang, South Korea. He believes that if North Korea agrees to send its athletes to the games, this would be a message that the regime is ready for negotiations.

At the same time, Hwang says the most realistic response to easing tension would be a "double freeze" agreement proposed by China. According to the proposal, North Korea must freeze its nuclear program and the South discontinues or significantly reduces its joint military exercises with the US. The expert says he hopes the regime in Pyongyang would be ready for such a deal, and in addition regular oil deliveries or compensation payments from the US for the Korean War, which hasn't officially ended.

Experts also say that the Hwasong-15 launch could bring the international community to the point where it was once in the mid-90s, when a fragile nuclear deal between then US President Bill Clinton and North Korea's founder Kim Il Sung was achieved.