North Korea has launched what appears to be a ballistic missile into the Sea of Japan, claiming it has the ability to strike anywhere on the US continent. China responded by urging Pyongyang not to raise tensions. North Korea has conducted numerous missile tests in 2017, including this test launching of an intermediate-range Hwasong-12 rocket in August

According to South Korea's Yonhap news agency, the missile was launched from Sain Ni in the South Pyongyang Province and flew eastwards towards Japan. Those reports were quickly confirmed by South Korea's military and US government officials — on condition of anonymity.

In a statement on North Korean television, Pyongyang said it had launched a new type of long-range intercontinental ballistic missile (ICBM) called a Hwasong-15. It claimed the missile was superior to the previous Hwasong-14 and was capable of striking the entire US continent.

It said the new rocket meant Pyongyang had "realized the great historic cause of completing a state nuclear force." The report claimed the missile was capable of carrying a "super-large, heavy warhead." Pyongyang has yet to prove itself capable of carrying a nuclear warhead back into the earth's atmosphere aboard such a missile, but experts believe it is not far off.

US, Japanese and South Korean officials all agreed it was probably an ICBM, saying it rose to an altitude of about 4,500 km (2,800 miles) and flew 960 kilometers (600 miles) over about 50 minutes before landing in Japan's exclusive economic zone — the area off the country's coast where it has jurisdiction over nautical resources.

The trajectory was largely confirmed by the North Korean announcement.

US Defense Secretary Jim Mattis said the missile traveled higher than any other Pyongyang has ever fired.

It was Pyongyang's first ballistic launch since September 15, when it fired a missile over the northern Japanese island of Hokkaido and into the Pacific Ocean. It also conducted its most powerful nuclear test ever that month, when it supposedly detonated a hydrogen bomb.

On Wednesday's broadcast, North Korea described itself as a "responsible nuclear power," but warned it intended to defend its sovereignty and territorial integrity from "the US imperialists' nuclear blackmail policy and nuclear threat." 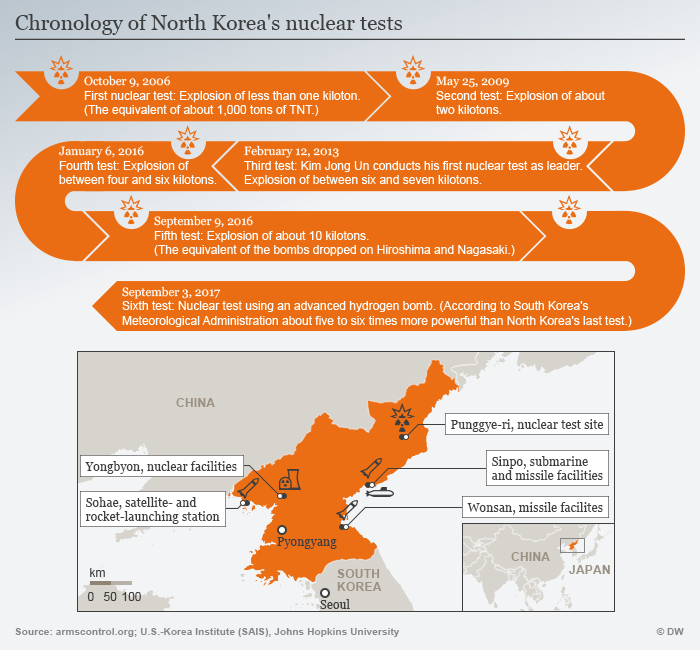 Trump: US 'will take care of it'

Addressing the missile launch, US President Donald Trump told reporters that "it is a situation that we will handle," without providing further detail.

The White House said that the president had been briefed on the North's ICBM test while the missile was still in the air. Trump was meeting with Senate Republicans on Capitol Hill at the time.

North Korea's most powerful ally, China, voiced "grave concern" over the launch and asked Pyongyang not to "aggravate tensions related to the peninsula situation."

"Undoubtedly, another missile launch is a provocative action that provokes a further increase of tensions," Kremlin spokesman Dmitry Peskov said. "We condemn this launch and hope that all relevant sides keep calm."

"An outrageous act like this is absolutely intolerable as it trampled on the international community's united strong will to seek a peaceful solution," Abe told reporters.

He called for the international community to unite and fully implement sanctions against North Korea. A Japanese government spokesperson also said the US and Japan had agreed that China had to play an increased role regarding North Korea.

A spokeswoman for European Union foreign affairs chief Federica Mogherini described North Korea's ICBM launch as a further unacceptable violation" of its international obligations. "This launch represents a further grave provocation and a serious threat to international security," she added.

The United Nations Security Council said it will hold an urgent meeting Wednesday to discuss the test.

A summer of saber-rattling

The launch comes just a week after Trump re-designated North Korea as a state sponsor of terrorism, allowing the US to impose even stricter sanctions on the rogue regime. The president said the terror designation and sanctions were part of his "maximum pressure campaign" against the North's regime.

Trump and North Korean leader Kim Jong Un traded a series of insults over the summer, which saw the US president use his maiden speech before the United Nations to warn Pyongyang that the US would have no choice but to  "totally destroy" North Korea if it were forced to defend itself or its allies from a missile attack.