Donald Trump's "America First" mantra won him the presidential election, but it may have cost the US its place as world superpower. China is hot on America's heels economically and politically, writes DW'S Miodrag Soric. 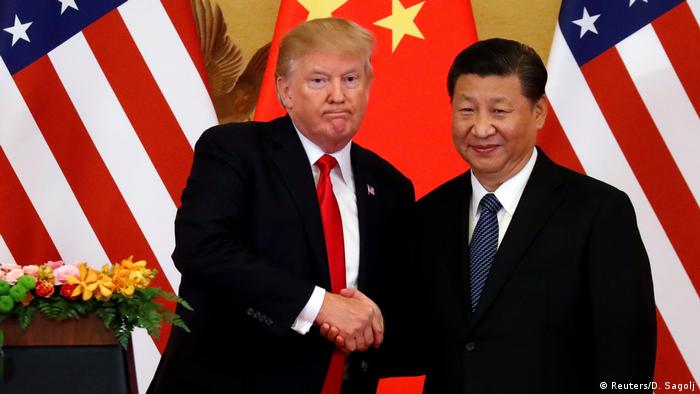 US President Donald Trump's rants about China during his election campaign were loud and clear. He claimed that China had been "ripping off" the US for years and stealing its intellectual property. Trump also accused China of artificially devaluing its currency in order to flood the US market with cheap Chinese goods, thereby also putting American jobs at stake. Republican presidential candidate Trump promised a radical change of course. He vowed to impose import tarriffs as a means of pressuring China and putting American interests first.

President Trump has been in office for a year now. He has not implemented any of his grand schemes. In fact, he is doing the opposite of what he promised. While in China, the first stop on his current tour of Asia, he fawned over Chinese President Xi Jinping, who, in turn, silently endured Trump's ingratiating behavior while flashing a smile now and then for the media.

What prompted Trump's change of heart?

It seems the US president has woken up and smelled the coffee. China's economy has been booming for decades. The country's share of global exports has reached 14 percent and continues to rise, while the US has only hit the ten percent mark. Americans are living on credit and must rely on loans from China in the future. For years now, Beijing has been investing its export surplus in US bonds and has become the nation's largest creditor, if you exclude the US Federal Reserve. If Beijing wanted to, it could turn off the money supply and plunge the US economy into a crisis.

Of course, the Chinese would do no such thing as they would only hurt themselves. Nonetheless, being in this position of power certainly boosts the Asian country's ego. Any time the US and China sit at the negotiation table, China will have the upper hand over its debtor. Apparently China's ambassador to the US has an ego so inflated that it almost lifts him off the ground.

Nowadays, most economic experts agree that it is only a matter of time before China overtakes the US as the nation with the world's strongest economy. Time is on President Xi's side. Any threats made by the loud man in the White House just bounce off the Chinese leader.

With respect to North Korea, the Chinese president will let himself be put him under pressure. Beijing does not want a "regime change" in Pyongyang. Why should China help expand the American influence in East Asia? Xi also does not want war to break out in this region of the world since it would be bad for business. Beijing has warned the US to tone down its threats towards North Korea and to seek a diplomatic solution. The European Union and Russia have applauded these calls for restraint.

China's rise to the top has been bolstered by Donald Trump's many bad decisions, the key one being America's withdrawal from the Trans-Pacific Partnership agreement (TPP). It was designed as a way to contain China's pursuit of world supremacy. With the help of the US, countries like Vietnam or Japan wanted to set standards for production, trade, safety and environmental protection. China would have had to adapt to the requirements. But Trump demonized the TPP during his election campaign and once in office, he scrapped US participation in the agreement. America's Asian partners now have growing doubts about American's reliability. China will be most pleased about the situation.

Beijing's resurgence as a global power looks like it will continue for a while. Mao Zedong united Chinese provinces that once fought against one another. Then Deng Xiaoping kicked off an economic boom. Now, Xi intends to strengthen China's foreign and security policies so that international political decisions must take the country's interests into account.