China and the US can solve problems of "great danger and security," Donald Trump has said. The two countries pledged closer cooperation on drug trafficking, North Korea, trade and world peace. 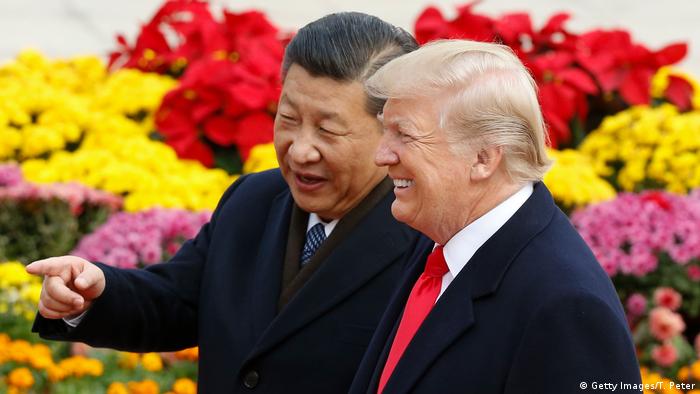 The US and China pledged closer cooperation on North Korea, trade, illegal drugs and international stability, during public addresses on Thursday.

Chinese President Xi Jinping told US counterpart Donald Trump at a bilateral meeting in Beijing that China believes cooperation between the two countries is the "only correct choice" and that relations between the sides have entered "a new historic starting point."

"We believe that Sino-US relations are a matter of the well-being of the peoples of the two countries as well as the peace, prosperity and stability of the world," Xi told Trump at a meeting at the Great Hall of the People.

Trump was equally effusive toward an erstwhile rival: "We have a capacity to solve world problems for many, many years to come. My feeling toward you is an incredibly warm one ... we have great chemistry, and I think we're going to do tremendous things for both China and the United States." Trump said his welcome in Beijing was "unforgettable."

The two leaders also pledged to work towards greater stability throughout the world, particularly in Afghanistan. They also reaffirmed their commitment to combatting the international international drug trade.

"We agreed not to replicate failed approaches of the past, and there were many. We agreed on the need to fully implement all United Nations Security Council resolutions on North Korea and increase economic pressure on North Korea until it abandons its reckless and dangerous path," Trump said.

Before arriving in China, Trump told the South Korean National Assembly that "all responsible nations must join forces to isolate the brutal regime of North Korea."

North Korea responded to Trump's tough words by saying the US should oust him from power.

State-run media in North Korea referred to Trump as a "lunatic old man" and said that the US should force Trump out "to get rid of the abyss of doom."

North Korea said the US should heed its advice "if it does not want a horrible nuclear disaster and tragic doom."

Speaking on trade and economic relations, the pair pledged to cooperate more closely.

Xi said China will become more open to foreign companies, including US firms.

"China-US business cooperation has vast potential. As the biggest developing and developed country, China and the US have many more areas for economic cooperation rather than competition," said Xi.

The two presidents also oversaw a signing ceremony in which business agreements and contracts worth more than $250 billion (€216 billion) were inked.

Trump often referred to China in his 2016 election campaign by calling Chinese trade practices "unfair," signaling his intention to recalibrate Washington's stance in relation to the Asian power, although without any clear signals what that might mean in practice. On Thursday, he said the US and China would be able to reach trade agreements that would benefit both countries.

"We will make it fair and it will be tremendous for both of us," Trump said.

A further boon to Sino-American relations came in the form of classical Chinese ballads and poetry — recited by Trump's six-year-old granddaughter Arabella Kushner in Mandarin.

The US president showed Xi the video on a tablet as they strolled through the Forbidden City. Arabella, the daughter of White House advisors Ivanka Trump and Jared Kushner, has been learning Mandarin from a Chinese nanny since the age of one.

The Chinese president gave Arabella's linguistic talents an "A+," state news agency Xinhua reported. A Foreign Ministry spokeswoman added that the young diplomat had "already received the love of a vast number of Chinese people," in reference to previous viral videos of her singing in Mandarin.

Ahead of a visit to Seoul, Jens Stoltenberg has urged UN members to implement sanctions against North Korea. Meanwhile, China and South Korea are to work together to persuade the North to give up its nuclear program. (01.11.2017)

The top US trade negotiator has described China's industrial policies as a "very serious problem." US President Donald Trump has accused China of cheating the US economy out of "hundreds of billions of dollars." (19.08.2017)

Armed gunmen broke into the Kabul offices of 24-hour satellite TV station Shamshad after setting off explosions. Within hours, security forces brought the latest attack on Afghan media offices to an end. (07.11.2017)