Donald Trump has called on Russia and China to help crack down on North Korea. At the same time, he has reassured South Korea that everything will work out fine with North Korea "because it always works out." 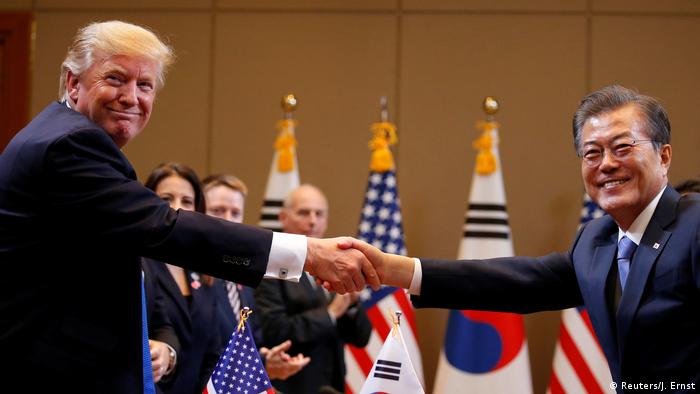 South Korea will order billions of dollars of US military equipment to improve defense capabilities against North Korea, US President Donald Trump announced in Seoul on Tuesday.

At a joint news conference with South Korean President Moon Jae-in, Trump warned North Korea that he was prepared to use the "full range" of military might to defend the United States and its allies.

"I think we're showing great strength. We sent three of the largest aircraft carriers in the world ... and we have a nuclear submarine positioned," Trump told reporters.  "We hope to God we never have to use them."

Trump called on regional powers to help deal with North Korea's aggression. "We call on every responsible nation including China and Russia to demand that the North Korean regime end its nuclear weapons and missile programs and live in peace," he said. "All nations must implement the United Nations Security Council regulations and cease trade and business entirely with North Korea. It is unacceptable that nations would work to arm and finance this increasingly dangerous regime."

Trump and Moon spoke optimistically of dialogue with North Korea backed up by military might.

"Today we had candid discussions about the steadfastness of the US alliance," Moon said. "We worked towards resolving the North Korea nuclear issues in a peaceful manner."

"We reaffirmed our principle that we must maintain a strong stance towards North Korea based on overwhelming strength," Moon said.

Read more: US, Japan agree that 'all options' are on the table for North Korea

In addition to increasing South Korea's military spending, the two also agreed to reduce the limit on missile payloads, maximize pressure on North Korea, and step up US troop deployments. They also plan to expedite trade negotiations, with Trump lambasting the current deal for being detrimental to the US.

"We make the greatest military equipment in the world, whether it's planes, missiles. South Korea will be ordering billions of dollars of that equipment, which frankly makes sense for them, and for US jobs and reducing the trade deficit," Trump said.

The US president flew in directly from Japan where he secured Tokyo's full support for Washington's stance that "all options are on the table" regarding Pyongyang, and declaring its nuclear ambitions "a threat to the civilized world and international peace and stability."

In Seoul more than 15,000 police were on high alert as both critics and supporters of Trump came out to protest.

Several dozen anti-Trump protesters rallied near the presidential office, holding signs that read "Trump, NOT welcome!" and "Say no to Trump, say no to war." They accused him of stoking tensions with North Korea and pressuring Seoul to buy more US weapons. On trade, they accused him of pressing Seoul to renegotiate a bilateral free trade deal to favor the US.

It 'has to work out'

Trump visited the US military base Camp Humphreys, about 70 kilometers (43 miles) south, earlier in the day.

"Ultimately it will all work out. Because it always works out - has to work out," he said without elaborating.

Ahead of the meeting Trump promised on Twitter to figure out all the issues.

In Asia, Donald Trump must act as US explainer-in-chief

The stakes are high for Donald Trump's first Asia trip. He needs to convey to US allies why his "America First" policy is not akin to disengagement and what his plans are on North Korea. He leaves with heavy baggage. (03.11.2017)

Angela Merkel: Germany will come out 'stronger' after pandemic 50m ago