Sieren′s China: Time for the EU to change its global mindset | World | Breaking news and perspectives from around the globe | DW | 25.02.2019

Sieren's China: Time for the EU to change its global mindset

The recent Munich Security Conference showed that the old world order is crumbling. It is time for the European Union to identify its interests and finally become independent, says DW's Frank Sieren. 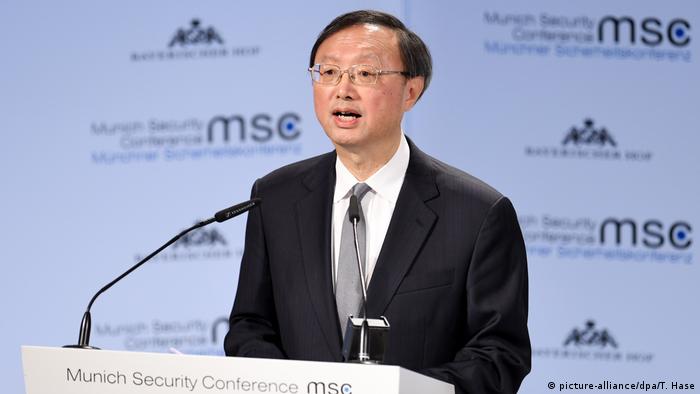 The 55th Munich Security Conference is over, but one message stood out this year: There is more fear about what is disappearing in the world than curiosity about what is coming.

It was also clear that the country with the most to lose from the new emerging world order is the United States. Yet, Vice President Mike Pence said during his address to attendees that "today, America is stronger than ever before, and America is leading on the world stage once again." The more he said this, more clear it became that he was incorrect. Pence called for more support from Washington's allies, especially regarding the country's withdrawal form the Iran nuclear deal and stance on Chinese technology. "We cannot ensure the defense of the West if our allies grow dependent on the East," he said. However, among European states, even the United Kingdom does not seem to share this view.

German Chancellor Angela Merkel was more open to innovation in her speech as she pointed out that we continue to live in a system put in place as a direct response to the horrors of the Second World War. "We have to think of integrated structures and interdependencies," she said, calling for a holistic approach and "networked" security.

"I would ask you not to think of our efforts to achieve a coherent European defense policy as something that is directed against NATO," Merkel added. "But as something that makes cooperation within NATO more efficient and feasible." Merkel also talked about developing "a common military culture" and "joint weapons systems."

She underlined that EU cooperation with Africa was still in its "early stages," while China had "pursued development policy in Africa on a large scale in the form of investment" in recent years. She was sure that China and the EU could learn from one another even if the EU had "not yet drawn up a development policy agenda with which we could say that investment will ultimately create enough jobs to ensure security, peace and stability in these countries, too."

Merkel also made it clear that for the EU, Russia remained "a partner" and that it made no sense to make Russia dependent on China." Multilateralism is not always fun, but often difficult, slow, complicated," she said.

It is easiest for China as an emerging global power to leave behind the old world order since it has the least to lose from its demise. Yang Jiechi, a Politburo member and director of China's Foreign Affairs Commission, echoed Merkel during his remarks when he said the world needed multilateralism now more than ever. He called for "coordination, cooperation and stability" in the relationship with the US and other world powers. "International law must apply equally to all, and double standards or selective application of international law should be rejected," he insisted.

China sees the nuclear deal with Iran that the EU remains committed to as a successful example of multilateral diplomacy. "I hope some Americans will have a bit more confidence in themselves and be a little more respectful to people, people in the so-called old world,'' said Yang.

Merkel could nod in agreement at this point. She said in her speech that she had been concerned to hear that some people in the US thought that European cars were a "threat to the national security of the United States of America."

Yang, who interpreted for future US President George H.W. Bush and his family during a trip to China in the 1970s, did not give in to Merkel's appeal for China to join the INF arms control treaty. "China develops its capabilities strictly according to its defensive needs and doesn't pose a threat to anybody else. So we are opposed to the multilateralization of the INF," he said. Since 1964, China has been committed to a "no first-use policy." In these circumstances, it probably would make sense to develop a new disarmament agreement. US military expenditure is four times higher than that of China. China has about 270 nuclear warheads. Russia and the US are believed to have over 4,000 each.

Merkel admitted that a world order without China is no longer feasible. "We can be as hard-working, as impressive, as super as we like — but with a population of 80 million we won't be able to keep up if China decides that it no longer wants to maintain good relations with Germany," she said. "That's how it will be all over the world."

Why not talk more to China?

The fact that China is not developing its military might as much as its economic power is something that the EU should take note of. In certain areas these days it makes more sense to talk with China than with the US. Why not make the most of this opportunity? It would not mean giving the US the cold shoulder in future.

What makes sense for the EU is becoming increasingly obvious. China and the US have to be kept in check by strong global institutions, which allow for debate and changing coalitions. The EU does not even have a common China strategy and one needs to be worked out. If we do not allow China to defend its own interests, then China can't agree to us defending our own. We'll only be able to act in a way that is strategically smart if we change our perspective. Merkel admitted this, too, in a surprisingly open way: "I am firmly convinced that it is better to put ourselves in one another's shoes, to look beyond our own interests and to see whether we can achieve win-win solutions together rather than to think we can solve everything ourselves."

The irony of history is that US President Donald Trump's attempts to shape international policy unilaterally are inadvertently leading to the dismantling of the old order. To put it more optimistically: Trump's selfishness is fertilizer for a multipolar world order that is forcing the EU to finally come off the fence.

DW's Frank Sieren has lived in Beijing for over 25 years.

Australia to target PNG and Vanuatu with cricket diplomacy 20.08.2022

The new program will help share Australia's cricket prowess in neighboring countries amid geopolitical tensions in the region.

Pelosi arrives in Singapore as US warns China not to escalate tensions 01.08.2022

The US House Speaker has a "right to visit Taiwan," the White House said, as Pelosi began her tour of Asia. Tensions over a potential unannounced visit to Taipei have grown in recent days.