Iran and Israel trade rebukes at Munich Security Conference | Germany| News and in-depth reporting from Berlin and beyond | DW | 17.02.2019

Iran's foreign minister hit out at the US and Israeli "fixation" on his country during the final day of the Munich Security Conference. Israel's representative, meanwhile, called Iran a "grave danger to the Middle East." 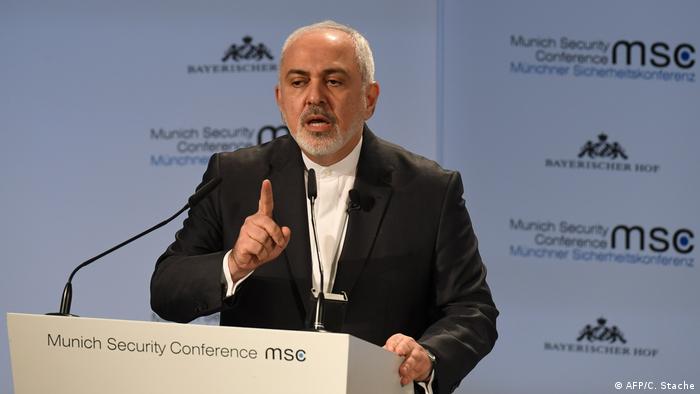 The Munich Security Conference (MSC) ended on Sunday in traditional fashion: a morning session focused on the Middle East. This year, though, the conference had to ride out an awkward imbalance, as the planned appearance of Saudi Arabian Foreign Minister Adel bin Ahmed Al-Jubeir was canceled "for scheduling reasons."

That left the stage clear for his Iranian counterpart, Javad Zarif, to deliver a typically well-honed rebuke to United States Vice President Mike Pence's speech from the day before.

Zarif's rhetorical flourishes were routine, but no less theatrical for that. The US, he said, had had an "unhealthy fixation" with Iran ever since the Islamic Revolution in 1979, Israeli Prime Minister Benjamin Netanyahu was the "wolf-cryer-in-chief," and the US military had "travelled 10,000 kilometers to dot all our borders with its bases."

"There is a joke: Why did Iran dare to put its country in the middle of the US bases?" he declared.

President Donald Trump's withdrawal from the Iran nuclear deal, officially known as the Joint Comprehensive Plan of Action, also gave Zarif plenty of ammunition. "In the past two years, the US has taken its animus towards Iran to a new extreme, as epitomized by its unlawful and unilateral abrogation of its commitments under the painstakingly negotiated Joint Comprehensive Plan of Action," he said.

Zarif also touched on the favorite theme of this year's MSC: picking up the pieces of the "puzzle" by reviving multilateralism. If Europe was to do that, he said, it had to stand up to US "bullying."

"They also need to walk the walk," he said. "Europe needs to be willing to get wet if it wants to swim against the dangerous tide of US unilateralism."

Afterwards, the German Green party's foreign policy spokesman Omid Nouripour, himself born in Iran, said Zarif had used the opportunity to challenge Europe's "double standards" in Iran policy: He repeatedly mentioned the fact that German-made chemicals had been weaponized and used on the Iranian people in the Iran-Iraq War during the 1980s.

"But what was much more important were the things he didn't say," Nouripour told DW. "When he talks about the fact that the Iranian people became victims of German chemical weapons, it's right to make a scandal of it. But for exactly this reason you have to ask whether it's not perverse that the Iranians support [Syrian President] Assad's own use of chemical weapons."

Read more: Women press ahead with change in Iran

Under questioning from moderator Lyse Doucet, Zarif eventually addressed human rights issues in Iran, specifically the arbitrary detention of eight environmentalists, but not before indulging in some whataboutism: His first response was underlining Saudi Arabia's murder of journalist Jamal Khashoggi, and then insisting, to some open laughter in the hall, that the Iranian government had no control over the country's judiciary.

The Israeli response was delivered in Munich by Benny Gantz, former chief of staff of the Israeli military and Prime Minister Netanyahu's most dangerous challenger in the country's April elections.

These tit-for-tat statements reflect a problem with many of the discussions at the MSC, which are often also hampered by a few obvious absences. A panel discussion on the Syrian conflict, for instance, included representatives from the US, Russia, Turkey, Lebanon, and Egypt, but no one from Iran, Israel, Saudi Arabia, or indeed Syria.

Such discussions, which often devolve into diplomats reading their national concerns off notes on their laps, contrast sharply with other panels, peopled by human rights activists and nongovernmental organization representatives who talk passionately about the suffering and existential threats that many people experience. 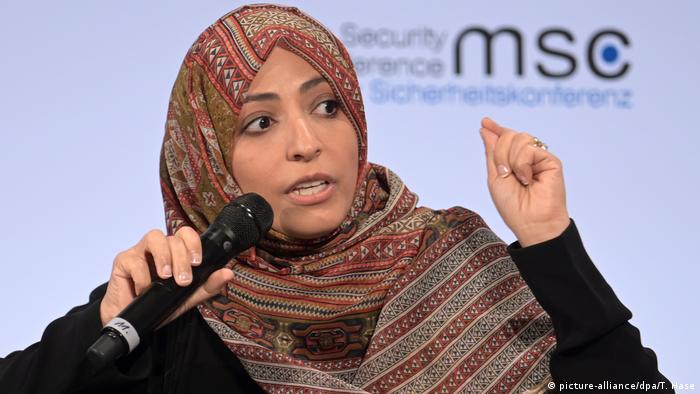 The gap between values and interests

That point was raised by Tawakkol Karman, Nobel Peace Prize laureate and chairwoman of Women Journalists Without Chains, who took part in Sunday morning's panel on "human security" in the Middle East.

"These kinds of conferences are very important because leaders meet with people who are against their policies: human rights activists, NGOs, etc," the Yemeni journalist told DW. "The leaders are the cause of most of the catastrophes in the world. At the moment they treat their interests as more important than the values."

Karman, who was called the "mother of the revolution" by some Yemenis during the country's uprising in 2011, also took the opportunity to accuse the international community of ignoring the devastation in Yemen.

"The treacherous Saudi-UAE coalition has taken the fascist Houthi coup as a pretext to carry out a systematic occupation and destruction against Yemen," she said. "And it has gone a long way in undermining the Yemeni state and in waging a genocidal war against Yemenis while the world stands by in a shameful way."