Few delegates at the Munich Security Conference showed up to discuss climate change. But those that did were reminded that the current collapse of the Earth's ecosystems is already causing conflict and mass migration. 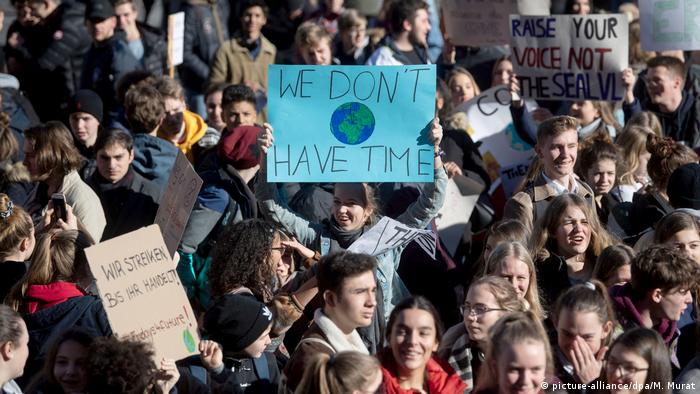 School children might be taking to the streets to protest government inaction across Europe, and scientists might be predicting extreme weather and catastrophic food shortages across the world, but for the delegates of the Munich Security Conference, climate change does not seem to be a very urgent problem.

The main conference hall, packed out to celebrate Angela Merkel's plea for multilateralism, its occupants looking a little nonplussed when US Vice President Mike Pence declared Donald Trump a "champion of freedom," was half empty when a panel including representatives of Bangladesh, Kenya and Norway discussed the obvious links between climate disruption and global security risks.

As the panelists noted, even though this represented the first time that climate change had been included in the MSC's main program, the security community had actually been the first to identify climate change as "a threat multiplier." In other words, climate change is increasing the likelihood of mass migration, terrorism, infectious diseases, and therefore global instability.

US only major power on panel

Indeed, the only major power represented on the panel was the United States, whose delegation sent Sheldon Whitehouse of the Senate Committee on Environment and Public Works to talk about hope for a "climate tax" and the power of fossil fuel companies in the US.

Read more: German President Steinmeier: 'We only have this one planet'

As it happened, it fell to former Secretary of State John Kerry to get up from the first row and point out the gravity of the circumstances. "We are currently living out, by acts of omission and commission, a mutual suicide pact on this planet," the political veteran said in a genuinely angry intervention. "We know how to do things, but we're not doing them! We are on the road to a four-degree rise this century. Are we talking about that?"

Kerry was impatient with the idea that the political importance of security could become an opportunity to push climate change higher up the agenda. "It's not that it's an opportunity, it's that it's stark reality," he told DW afterwards. "The fact is we've been talking about it as a security issue for a number of years." 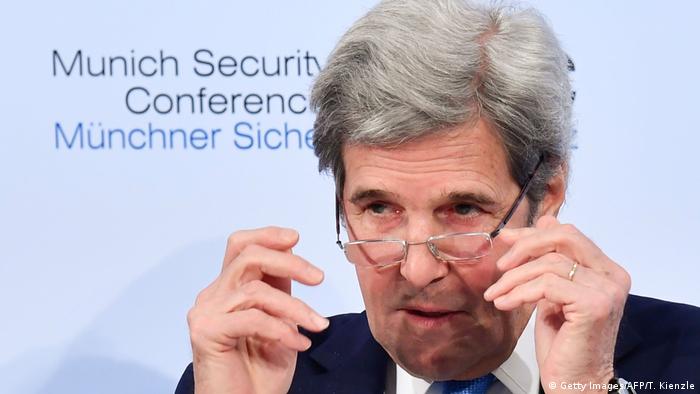 "We had meetings with military people all round our country, talking about the threat multiplier effect," he continued. "Major generals in our country have spoken about climate change as a fundamental security issue, and we had an office in the Pentagon, until Trump, that was focused on planning to deal with climate change. Trump shut the office. People need to connect the dots."

On the panel, Monica Juma, Kenyan Cabinet secretary for foreign affairs, explained how ethnic land disputes were flaring as Lake Turkana, in the north of her country, dries up. Making things worse, droughts in the Turkana basin are also threatening the livelihoods of half a million people. "So it is not a surprise that we're beginning to see analyses saying that perhaps one of the major conflicts we are going to see is water wars," she said.

Meanwhile another panelist, Bangladeshi Prime Minister Hasina Wajed, whose country has already experienced catastrophic flooding, described how her government had been forced to take its own measures, for lack of international support. John Kerry described what was happening to Bangladesh as "immoral."

The Senegalese town on the verge of disappearance

The social effects of climate change are already noticeable enough to be affecting how people react to politicians. "We're experiencing the leading edge, right now, of massive dislocations in the Earth's natural systems," said Sheldon Whitehouse. "That results in the dislocation of the human species. That causes suffering, and when people suffer, they want explanations, they want accountability and justice."

"And when people look back at this time, they will say, 'Free market capitalism, and free elected democracies, conspicuously failed to prevent the harm that is now hurting me and my family,'" he added.

It's not as if ordinary people aren't already feeling this anxiety. A new study released by the Pew Research Center found that climate change was the biggest fear in almost all of the 26 countries surveyed: including Brazil, Mexico, Canada, Argentina, South Korea and most of Europe's biggest countries.

The Pew survey also underscored how ideological the reaction to climate change is, with supporters of right-wing populist parties in Europe and the Republican party in the US much more skeptical.

But the threat is generally perceived as an environmental problem — something for environmentalists to protest about. Few people have made the connection between climate change and war. A 2016 article by the Bulletin of Atomic Scientists argued that climate change could exacerbate the dispute over Kashmir, as Pakistan and India argue over access to the glacial melt water from the Himalayas in the region.

Even though those conflicts seem far away from affluent cities like Munich, their impact on the systems that hold the prosperous parts of the world together is already being felt. In fact, some studies have shown that droughts in North Africa exacerbated the migration crisis that reached the Bavarian capital, and Germany more broadly, in autumn 2015.

"The climate crisis will be the dominant cause for migration movements in the future," Green party parliamentary leader Anton Hofreiter told DW. "When weaker countries experience several drought disasters or floods, it might not be the only cause for the collapse of a country, but such countries are more likely to fall into civil war and chaos."

Panelist Bunny McDiarmid, co-executive director of Greenpeace, reminded the audience about what was going on outside, and across Europe. "We've got school kids marching in the streets because they don't believe politicians are acting fast enough," she said. "They're the only adults in the room. Climate change is a systems disruptor that is going to affect every single aspect of our lives."

Ischinger: Merkel has the 'upper hand'

As Donald Trump leads the US's withdrawal from multilateralism, the Munich Security Conference is dominated by concerns the world is fragmenting. But, to some, insisting on this world order threatens Cold War conditions. (16.02.2019)

German Chancellor Angela Merkel has warned of a disintegration of international political structures. Speaking in Munich, she called for greater cooperation and stressed the importance of NATO. (16.02.2019)

Thousands of protesters hit the streets of Katowice to sound the alarm on climate change. They want world leaders meeting at the nearby climate conference to repeat the historic Parish agreement. (10.12.2018)