Bangladesh is on the front line of climate change, as its low-lying delta farmlands face surging floods. But floating gardens – a traditional form of hydroponics – is offering a lifeline to some farming families.

In summer 1988, a surging flood hit Bangladesh. Then, it was the worst the country had suffered for years.

Hari Podo, a farmer from Gopalganj district, and his family had no place to escape the rising waters, he recalls. So, they turned to a practice honed by his ancestors.

Podo collected water hyacinth, a floating plant common in the canals, and built a raft a few meters wide and about 10 meters long. With his family and animals, he stepped aboard.

"We lived on the hyacinth raft," Podo told DW. "Humans to one side and domestic animals to the other. We slept and cooked food on the floating plants. We lived there for about two months, on water."

Back then, reviving traditional floating gardens saved Podo's family. Now, as flooding becomes an ever-greater threat, it could save many more livelihoods. 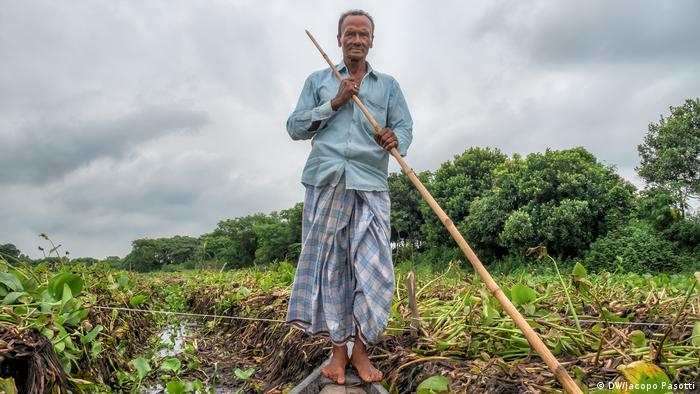 Hari Podo navigates between floating gardens, much like the one he and his family took refuge on 30 years ago

"Seasons have changed," Podo said. "Nowadays rain is heavier than before."

Bangladesh is trapped between the melting ice caps of the Himalayas, increasingly violent monsoons from the north, and the rising tides of Bay of Bengal to the south.

"People have started to adapt," Zahid Shashoto of Uttaran, a development NGO based in Satkhira, told DW. "Maybe farmers don't know the problem, but they are looking for solutions as they have done for centuries."

In the south, the rising sea level combined with natural subsidence is letting salt water into the once-fertile Ganges-Bramhaputra delta soil; into farmer's fields and wells.

Between 2000 and 2009, salt-water intrusion crept 15 kilometers north of the southern coast. Today, during dry season, it reaches 160 kilometers inland and threatens 40 percent of farmland in southern Bangladesh. 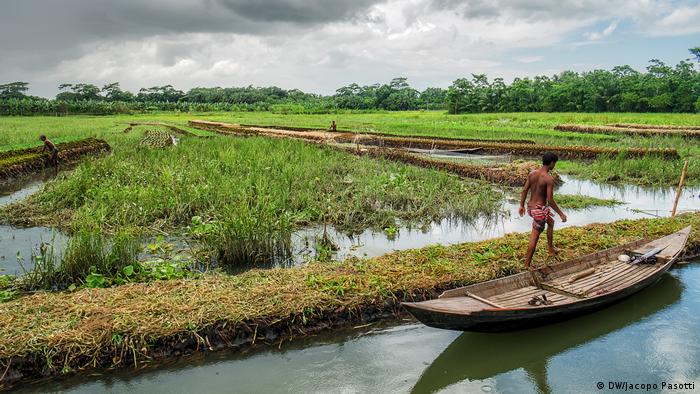 With climate change putting this rich and fertile environment under pressure, farmers are being forced to adapt

"Salty waters harm agriculture," said Mahmud Shamsuddoha head of the Center for Participatory Research and Development in Dhaka. "The more you go the south, the more you see that agriculture is not profitable anymore."

Shamsuddoha told DW that over the last decade, agriculture's share in GDP has fallen from 50 percent to around 20 percent.

From agriculture to aquaculture

Some farmers are giving up and looking for work in urban areas. Others are turning to shrimp farming.

Joggadish Mallick lives in the tiny village of Parmagur Khali in the Satkhira district. At 59, he's seen his home change dramatically over his decades.

"Farmers are struggling," he said, leading the way to his shrimp ponds with bare feet stepping nimbly onto narrow, slippery mud dykes. "Most of them are leaving the village and are migrating to cities. Some work in garment industries in Dhaka, others pull a van in Khulna."

For those left behind, shrimp farming is a better source of income than the back-breaking work of farming unproductive land. "Today we are not in deep poverty. By farming shrimps we are better-off," Mallick told DW. 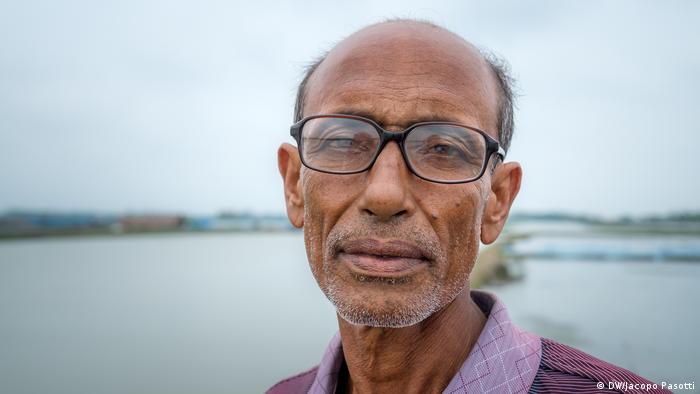 Shrimps are now the country's second-biggest export — after clothing — mostly going to the European Union. But aquaculture has a high social and environmental cost.

"The beauty of our area is long gone, there are hardly any trees here," Mallick said. "There were a lot of people, we had a good life. Now, due to saltwater intrusion and shrimp farm ponds, such beautiful environment is disappearing."

And with the coast eroding fast under onslaught of unusually forceful cyclones, even shrimp farming's days could be numbered. Mallick believes it is only a matter of time before his and the surrounding villages are deserted.

Building on the swamp

In districts like Gopalganj, Jessore and Kuhlna, saltwater intrusion isn't yet a problem. But floods are. With farmers' futures no longer certain, some are adapting to the new conditions.

Giassudin Saddar grows bananas, guava, coconuts, mangoes and okra. His patch of land is surrounded tall, leafy trees and a maze of canals. "We love our rivers and our canals, we are used to this life," Saddar said proudly. 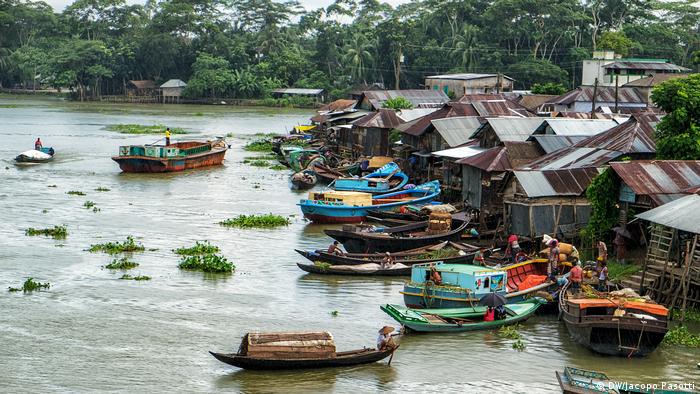 His village, Nazir Bazar in the district of Piorjpun, rises from land that was once marshy forest. Villagers piled soil onto the swampy ground and dug canals to keep it drained, creating a solid base for their homes and gardens.

Kids dive from the shady banks of the canals into their greenish waters. They use boats to get to school, just as their parents make the journey to market.

Unlike Mallick, the shrimp farmer, Saddar is optimistic about the future. "Whatever we face — rivers, canals, rain, floods — we have learned to live with a changing environment," he told DW.

For others, the answer is a traditional form of hydroponics unique to this part of the world.

For hundreds of years, villagers have been using paddy straw and aquatic plants to create islands of organic material up to around 20 meters (65 feet) in length.

The technique was dying out. But now farmers see it as a way to cope with the changing weather and increasingly threatening floods. 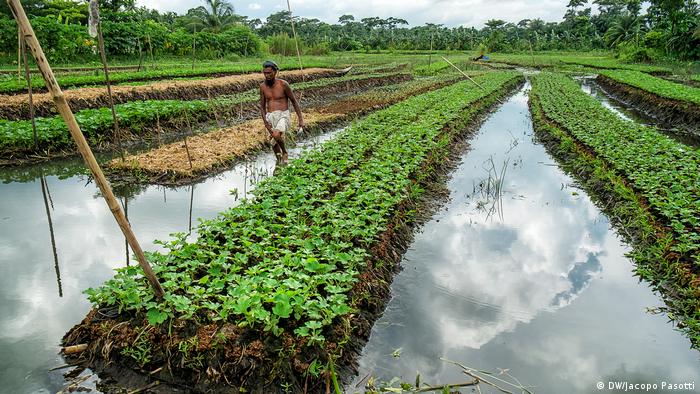 Farmers in the Bangla Delta have used hydroponics for centuries. Now, this unique technology is needed more than ever

Men and women work side-by-side to build their living rafts, and their produce is organic. Growing on the water, the crops are less vulnerable by pests and don't require fertilizers. Each floating platforms last around three months. After that, it's brought ashore and used to fertilize crops grown on land.

In this way, water hyacinth, an invasive species that thrives even when salt contaminates the water, and is generally seen as a pest, has become something of a hero plant, forming the perfect base for floating gardens.

Shamsuddoha points out that the rafts are only a solution for particular environments and says he fears that as the sea level keeps rising, the increasing salinization could prove toxic even for hardy plants like the water hyacinth.

But for now, for some families at least, floating agriculture has proved a lifeline that a recent report from the Deakin University in Australia says, "could enormously support a farming community in achieving sustainable development."

Climate change is prompting Miami's rich to abandon the oceanfront and head for higher ground. That's bad news for the people of Little Haiti, a ridge-top immigrant community suddenly sitting on hot property. (27.12.2018)

A small island in Chesapeake Bay is drowning due to erosion and rising sea levels, but most of its residents don't believe in climate change. Instead, they hope US President Donald Trump will build a wall to save them. (27.11.2018)