Climate change poses dire challenges for Bangladesh | Asia | An in-depth look at news from across the continent | DW | 14.12.2018

Bangladesh is one of the countries most vulnerable to climate change. Extreme weather events there have already been wreaking havoc on the people there. They're also causing a shift in migration and poverty patterns. 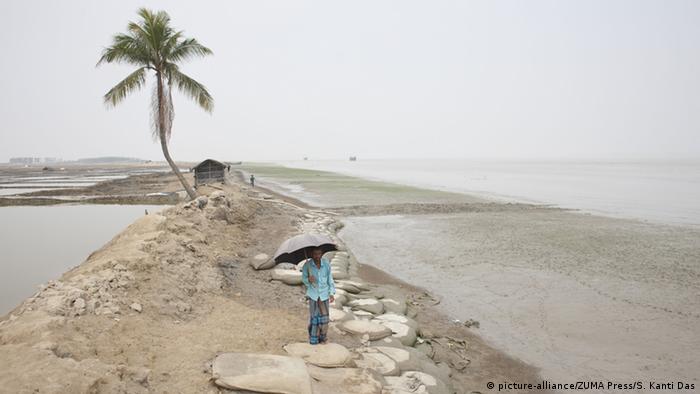 In August 2017, 6.8 million people in northwestern Bangladesh found their land and crops drowned under flood water. The totally submerged land constituted over 16,000 hectares, while another 560,000 hectares of crops were partially damaged. That's not an isolated occurrence.

In April the same year, floods wreaked havoc on Bangladeshi farmers, damaging around 220,000 hectares of ready-to-be harvested crops, according to the UN Food and Agriculture Organization.

Read more: Who does Bangladesh bill for climate impacts?

Official estimates suggest that in 2017 alone, the floods severely affected the livelihoods of at least eight million people living in Bangladesh.

"The second largest mass of water for a country flows down through Bangladesh," Atiq Rahman, a leading environmentalist and member of the Intergovernmental Panel on Climate Change (IPCC), told DW.

"Rain contributes only eight percent of the water that flows through Bangladesh. The rest 92 percent comes from China, India, Tibet, Nepal and Bhutan," he added. During the monsoon season every year, between June and September, Bangladesh faces flash floods.

But floods are not the only problem Bangladesh faces. "Bangladesh is vulnerable to sea-level rise, like in the case of the Maldives, but other effects like drought, cyclone, lightning and river erosion have made this country more defenseless," Rahman said.

In a new global index, Bangladesh has been ranked seventh among the countries most affected by extreme weather events in 20 years since 1998. The Long-Term Climate Risk Index listed Puerto Rico and Sri Lanka as the top two affected countries.

The index is part of a report, Global Climate Risk Index 2019, which was recently released at the annual climate summit in Poland's Katowice city. The report was prepared analyzing damages caused by the extreme weather events that took place from 1998 to 2017.

"This rank is just a number. It does not tell a lot," Rahman argued. "What terrifies me is that the most vulnerable countries are becoming even more vulnerable."

Bangladesh has been one of the fastest growing economies in the world over the past several years, with the nation's economy expanding by an average of 6-7 percent over the past decade. The government is attempting to boost growth further and targeting double-digit expansion in the coming years.

But some economists say climate change-linked problems are likely to act as a drag on the nation's growth prospects.

"A study conducted by the Asian Development Bank (ADB) concluded that climate change has been posing big economic and development challenges for Bangladesh," Selim Raihan, an economics professor, told DW.

The study pointed out that Bangladesh would face annual economic costs equivalent to about 2 percent of its GDP by 2050, widening to 9.4 percent by 2100.

The reasons for these losses, according to ADB, include an immense loss of crops, land, internal migration and salinity, among other things.

"To maintain or uplift economic growth, you need investment. But in Bangladesh, due to climate change, economic development requires comparatively more resources and investment. This also adds to economic loss," said Raihan.

Raihan also pointed out that climate-related catastrophes are causing a shift in migration and poverty patterns in Bangladesh. "Because of the huge internal migration as a result of climate-related issues, poor people from the south of the country are migrating to urban areas," the expert said, adding: "So eventually poverty is being transferred from rural to urban areas."

Nazrul Islam, a professor of geography and environment of the University of Dhaka, said that more resilience is needed to deal with the problem. "In Bangladesh, we have already conducted research on salinity-resilient crops. We're now doing research on diversification of food in coastal areas," Islam told DW.

But the expert said the cost of climate change adaptation measures remains prohibitively high and countries like Bangladesh cannot afford to spend such huge sums on them.

According to ADB, if the world continued on its current path, South Asia would need to spend at least $73 billion on climate change adaptation measures.

"The global south should join forces and fight together to overcome the problems posed by climate change. In this mission, forging a meaningful partnership with the world's developed and largest economies is also essential," said Raihan.

Bangladesh is scheduled to hold a general election on December 30, a vote that is seen as crucial for the survival of democracy in the South Asian country. Follow DW's coverage of the pivotal elections right here. (11.12.2018)

Young people in Bangladesh are poised to be a decisive factor in general elections later this month. Political parties are trying to attract them by roping in prominent filmstars and sportsmen for their campaigns. (04.12.2018)