US Vice President Mike Pence has criticized European partners for sticking to the 2015 nuclear accord with Iran after the US withdrew. He also condemned the Nord Stream 2 oil pipeline between Russia and Germany. 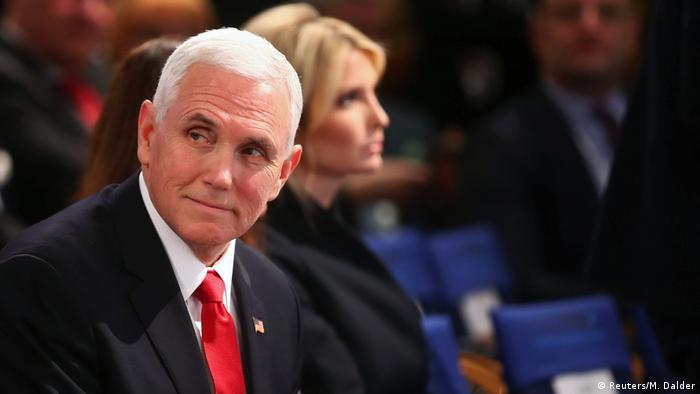 The US vice president on Saturday condemned European allies for adhering to the 2015 Iran nuclear deal after Washington pulled the plug on the accord.

Speaking shortly German Chancellor Angela Merkel's speech calling for international cooperation, the vice president hit out at the European signatories to the Iran deal — Germany, France and Britain — for not following the US in quitting the deal.

Pence evoked a visit he made to Auschwitz the previous day to say anti-Semitism voiced by the Iranian leadership should be taken at its word.

"The Iranian regime openly advocates another Holocaust," he said, urging the European countries to scrap the 2015 Joint Comprehensive Plan of Action (JCPOA).

Read more: Opinion: Iran's options are either sanctions or corruption

"The time has come for our European partners to withdraw from the Iran nuclear deal and join us as we bring the economic and diplomatic pressure necessary to bring the Iranian people, the region and the world the peace and security and freedom they deserve."

Europe with Russia and China

Under the 2015 nuclear agreement, Iran agreed to curb its enrichment of uranium in exchange for the lifting of most international sanctions. While the US has pulled out of the deal, the three European countries along with China and Russia have continued to support it.

Earlier, Merkel said she shared concerns about many Iranian efforts to grow its power in the region, but she defended the deal as an important channel to Tehran.

Pence, who received modest applause for his Iran comments, went on to say the US had "stood strong" against efforts to divide NATO "through political interference and the use of energy resources."

In an apparent dig at Germany, the vice president praised European allies who had taken a stand against the Nord Stream 2 oil pipeline. "We commend others to do the same," said Pence.

The Nord Stream 2 pipeline is intended to double the capacity for shipping gas from Russia to Germany via the Baltic Sea. However, while the scheme is backed by Germany and France, it is opposed by the Baltic states and Poland.

The US has said it fears that Europe could become dependent on Russian gas, while Washington also wants to sell shale gas to its allies. However, Angela Merkel has dismissed US concerns, saying Europe is keen to have both Russia and the US as key energy suppliers.

An Iranian government video showed the test missile being launched and hitting a target in the desert. Tehran insists it is part of a purely defensive program and does not violate an international accord. (02.02.2019)